The 6.5 Grendel cartridge is deserving of an Editors’ Choice Award in its own right, but we’re about ten years late on that score. The 6.5 Grendel was released in 2004 as a proprietary cartridge, but Alexander released his rights and it was adopted by SAAMI in 2011. The 6.5 Grendel is currently loaded by Hornady, Alexander Arms and Wolf Ammunition in bullet weights ranging from 110 to 130 grains.

We’ve tested the 6.5 Grendel cartridge repeatedly on both whitetail and mule deer, every one of which was decisively dispatched with a single shot. Alexander Arms’ 130-grain Berger VLD load (2,500 f.p.s./1,804 ft. lbs.) is our ammo of choice for long-range deer duty. With a 250-yard sight-in, and assuming a 10-inch diameter kill zone, it has a maximum point blank range of just under 300 yards, retains over 1,000 ft. lbs. of energy at 425 yards and is still supersonic out past 1,000 yards.

“We actually hit a sweet spot for bullet efficiency, weight and cartridge volume when we did the Grendel,” says Alexander. “A mid-weight 6.5 bullet can be pushed fast enough on the modest pressures dictated by the AR-15 to flatten the trajectory, but has enough weight and a high enough ballistic coefficient that it doesn’t loose much velocity with range. Best of all for the hunter, 6.5 bullets have high sectional densities and long shanks, so they usually pass entirely through a deer.”

With performance like that, Alexander set out to design an AR-15 platform rifle optimized in every respect for hunting—a rifle that would provide 100% reliability in the most extreme weather conditions Mother Nature can throw at us. It took several years, but the result was well worth the wait.

The Hunter is built on forged and machined aluminum receivers, with a rifle-length gas system and A4 upper with 13-slot Picatinny top rail. Every other pin, part and component has been upgraded through design, enhanced metallurgy and/or high-tech surface finish, and the Hunter has been extensively field tested in both desert and arctic environments to insure total reliability. 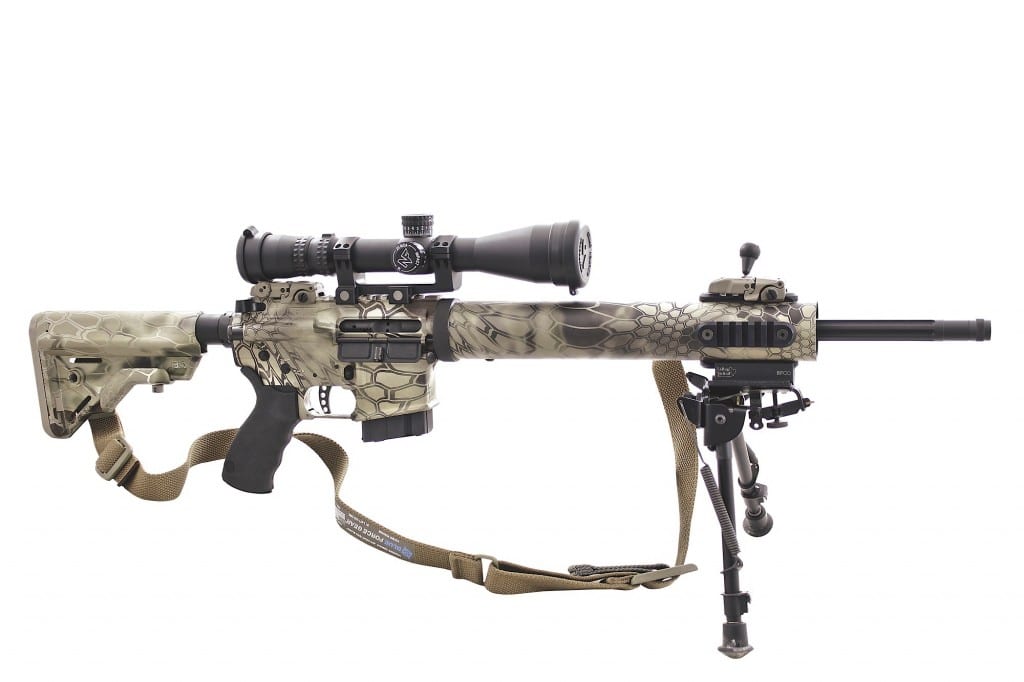 Those upgrades begin with an 18-inch stainless steel barrel, button-rifled at a 1:7.5” twist rate, with a unique, fully fluted profile to reduce weight, increase stiffness and provide neutral balance for fast mounting and aiming. The crowned muzzle is threaded at 9/16” x 24 t.p.i. and comes with a screw-on protector, which can be replaced with a muzzle device or suppressor in states where they are legal for hunting. Six different flash hiders and muzzle brakes are available as factory-installed options ($60 to $130). Other major enhancements include extreme-weather fire-control components. The firing pin is trilobially ground and hard-chrome plated to prevent freezing at temperatures down to -85 degrees F. The trigger is an extreme-weather hunting version of Alexander’s Tactical Blade trigger—one of the best single-stage factory triggers we’ve used—hard-chrome plated and ion bonded to prevent corrosion. Remember the young guy on Life Below Zero who’s AR is frozen solid every time he wants to shoot a wolf or caribou in the winter? Somebody really needs to turn him on to the 6.5 Grendel Hunter.

Our test gun’s trigger broke like fine crystal at an average pull weight of 4 lbs. 4 oz., with zero take-up, creep or stacking. It’s adjustable for take-up and over-travel, and the narrow blade provides increased sensitivity when shooting with gloves in cold conditions.

Furniture consists of a B5 Systems Bravo SOPMOD 6-position buttstock with enhanced cheek weld and rubber butt pad, and an Alexander Arms full-round, composite handguard free floated over its entire 12.5-inch length. One 5-slot steel rail section is included for mounting in pre-drilled holes at the forward 3, 6, 9 and 12 o’clock positions. The buttstock and handguard, along with the upper and lower receivers, are finished in Kryptek Highlander camo (Mandrake and Yeti patterns available optionally), while the textured rubber pistol grip is Ergo’s excellent, hand-filling Suregrip model. Upper-to-lower receiver fit is very tight, with virtually zero perceptible play. Empty weight is 6.6 pounds.

The Hunter is chambered in both 6.5 Grendel and .50 Beowulf, but the .50 Beowulf version is fitted with a 16.5-inch barrel to optimize external ballistics with that cartridge. The retail price for either model is $1,750.  Complete uppers are also offered ($1,190), but without a Hunter lower you don’t gain the advantages of the enhanced trigger components.

The 6.5 Grendel Hunter is light, fast, powerful, accurate and weatherproof—everything a hunter needs in a rifle. See it at your firearms retailer, or contact Alexander Arms, Dept. OT; Tel.: (540) 639-8356; Web: www.alexanderarms.com