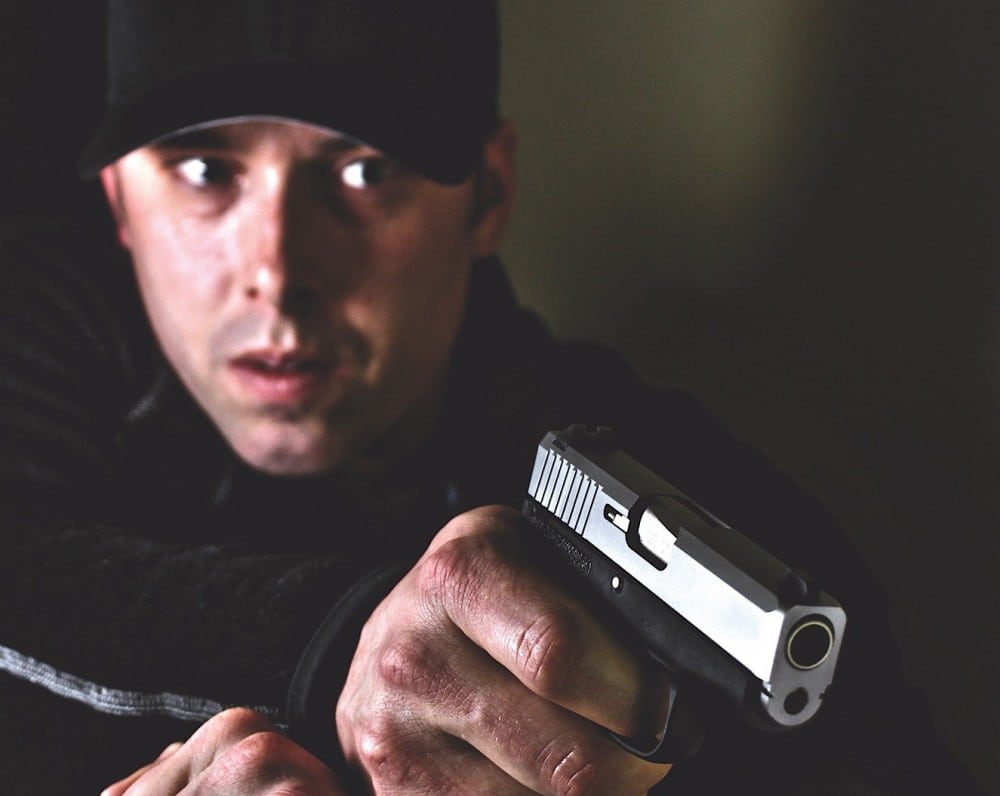 Low price and high shootability are the hallmarks of this new little .380.

Kahr pistols have made a great many friends since their introduction some two decades ago, with the light polymer models leapfrogging the original all-steel Kahrs in popularity. .380s in general, and small light .380s in particular, have also been big sellers of late. Finally, economy priced .380s have also captivated the firearms marketplace. In 2014, Glock’s smash hit G42 .380 proved that there is a huge market for a .380 that’s flat and concealable, but enough bigger than the tiny vest pocket/bra holster size .380s that it’s easy to shoot.
Perhaps it was inevitable that Kahr Arms would tie each of these trends together and come up with a pistol that fit them all. This is precisely what they have done with their new CT380.

Overview
Carrying a manufacturer’s suggested retail price of just $399, this is Kahr’s lowest priced .380 pistol. Less sculpting, nothing fancy, only one magazine. It is to Kahr’s more upscale .380 line what the old Chevy Biscayne was to the Impala: same body, same innards, done in plain vanilla. The slide stop, for example, is MIM (metal injection molded) instead of machined. The polymer frame, reinforced with ordnance steel inserts, brings weight down to a feathery 11.5 oz. unloaded, and is long enough in the grip to accommodate a 7-round magazine. Yes, it’s “drop-safe” for the eighth round in the chamber.
Kahr spec’d the pistol for maximum slimness: 0.75″, not counting the somewhat protuberant slide release lever. (Yes, I said “slide release.” It’s a slide lock lever too, of course, but with a strong recoil spring assembly and a short slide stroke, I found that with the gun at slide-lock, I couldn’t move the slide back enough to release it and chamber a round with a slide tug. Pressing down on the slide release lever was mandatory to chamber a round.)

The CT380 appears to be designed to compete directly with the Glock 42, and they’re quite similar in dimension, the differences being fairly small. The Kahr is a bit lighter when unloaded, distinctly shorter front to back, and thinner, but longer from rear sight to butt owing to its one more round in the magazine than the six-plus-one G42. Both the CT380 and the G42 come with the good sights of their larger forbears, thank goodness, and not the vestigial and all but useless nubbins we see on some other little .380s. The big difference is seen in trigger-pulling: while both have very short trigger reach, a good thing for small hands and short fingers, the Glock has a shorter trigger pull, where the Kahr’s, while smooth, is distinctly longer. The longer frame of the Kahr also lets you get the little finger onto the frame for a full grip.

Accuracy
It has long been in vogue to test “pocket pistol” accuracy at fifteen yards, ten yards, or even seven yards, on the theory that they’re meant for close-range self-defense, instead of the usual 25 yard distance for full size service pistols. Until such time as The Bad Guys sign an enforceable treaty to the effect that they won’t shoot at us Good Guys from longer distances, I hope you’ll forgive me if I still test to the 25 yard standard. From that distance, I put the CT380 on a concrete bench with a Caldwell Matrix rest, and ran it with the three most popular bullet weights for the caliber.

The results were instructive. We think of ammunition the way we think of gasoline: if it’s supposed to be the right “octane level” we assume it’s all the same irrespective of brand. When I was young my dad and his friends all seemed to have preferred brands of gasoline: he insisted on Atlantic-Richfield because it seemed to run his cars better than Standard Oil. By the time I started driving, Arco and Esso (and all the rest) seemed interchangeable if the octane level and composition were roughly the same.
In those days, shooters also had distinct ammo preferences. Some insisted on Remington ammo in Remington rifles and Winchester ammo in Winchesters, while others found by experimentation that Winchester ammo might shoot better from this Remington, and Remington cartridges might group best from that Winchester. And, my now rather long adulthood has proven that the latter was indeed the case.
I saw that classically with On Target’s CT380. The first round I benched it with was Speer Lawman 95-gr. FMJ, which has been the standard .380 format since 1908. The little Kahr spewed a group just over seven inches for five shots, way high from point of aim. Even the best three of those hits were 3.50” apart. Disbelieving, I tried it again, and the next run was even worse. Speer .380 is usually fairly accurate, but not in this specimen.

But then I tried it again with something lighter and faster, Winchester 85-gr. Silvertip. Those five shots went into a laterally dispersed group that measured 3.30” wide by a mere six-tenths of an inch in vertical dispersion. Night and day!
Finally, I ran Buffalo Bore’s hot 90-gr. JHP, which they call “+P” even though I’m not aware of an industry spec for +P pressure in a .380 auto round, rated by its manufacturer for 1,175 f.p.s. and 267 ft-lbs of energy. This gave the best accuracy of the test: all five shots were in 2.20”, with the best three exactly an inch tighter in 1.20”. With the two JHP loads, the point of aim/point of impact was only a little bit high and a little bit left: close enough for most needs. The CT380 had just redeemed itself accuracy-wise.
Some don’t feel they need accuracy in a .380. I do. With this minimum power level, shots will have to be delivered with precision to be effective. This demands an inherently accurate platform, as well as an ergonomically shootable one. The CT380 fulfills both requirements.

Reliability
Kahr, to their everlasting credit, was the first company to come out publicly and say that their gun should be broken in for a couple hundred rounds before being trusted for reliability. I think that’s true of every other firearm of every kind on the market, but I digress. We had one misfire (very light hit) early in the test. The shooter reflexively tap-racked, so we couldn’t examine the gun in situ to see if it might have been out of battery. (The round was a Lawman, and Speer doesn’t have the softest primers on the market.) There were no further mechanical malfunctions.

Concealed Carry
I loaded up the On Target CT380 and carried it in the side pocket of a pair of Tru-Spec BDU pants for a day in a generic pocket holster. Results were exactly as expected. The gun disappeared; it was as quick to hand as any pocket auto could be; and it was so light, I could easily forget that it was there. Ease and comfort of concealed carry is, of course, the raison d’etre of this type of pistol. The CT380 delivers.

Perks and Quirks
Every firearm has features you love, and others that you have to work around. Downsides on this gun: the recoil spring system was very stiff and required a lot of force to operate. This pistol is not the best choice for an arthritic grandma or any woman of slight stature for this reason. The magazine needs to be pushed in hard to seat positively; we found ourselves occasionally giving it an extra rap to make sure it was in place. Being a scaled-down version of the 9mm and .40 Kahrs, the .380 has a proportionally smaller trigger guard. A couple of the testers found the top edge pinched the skin of their index fingers when it returned forward for the next shot. And, of course, it’s a .380, but that’s a topic I’m inclined to leave for another day.
However, the perks outweigh the quirks. Find the ammo it likes, and the CT380 shoots! The recoil is negligible, thanks to its locked breech design and wisely chosen dimensions. The double action trigger pull was measured from the center of the trigger where the index finger would rest, with a Lyman digital gauge, and came out to an almost exact and very consistent six pounds. This sounds like a lot on an 11 oz. gun, but in fact is very light for double action only, and allowed the test team to hit what we were shooting at. The Kahr CT380 proved, all in all, to be a very good balance of portability and shootability within the power range of its caliber.
If you’re in the market for a .380 with a good balance of “you can hide it” and “you can hit what you’re shooting at,” at a very reasonable price for its high quality, you definitely want to check out the Kahr CT380. For more information contact Kahr Arms, Dept. OT; Tel.: (508) 795-3919; Web: www.kahr.com