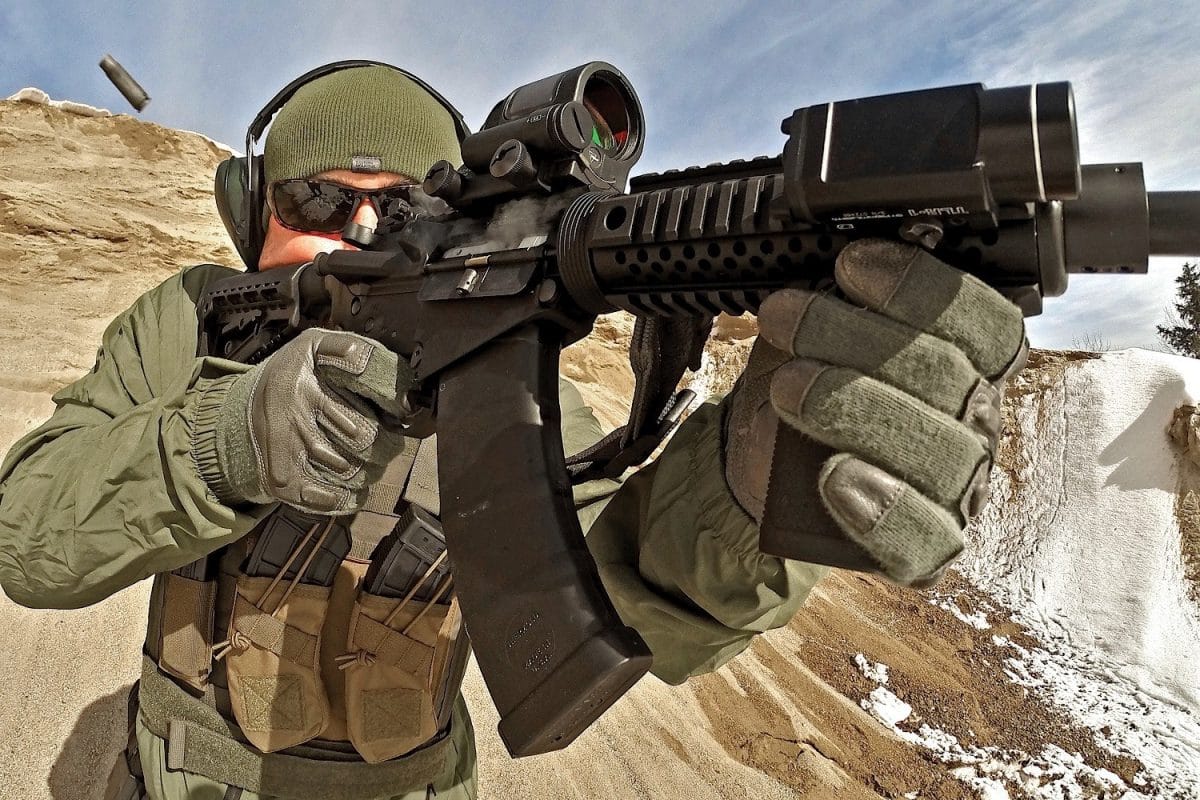 I’ve always been a big fan of the 7.62×39 cartridge. I own a number of AK-47s and I’ve grown to appreciate the power of the 7.62×39, especially when compared to the 5.56 NATO round. Comparing a 123-grain 7.62×39 to a 55-grain 5.56 NATO, the former is not only less expensive to shoot, but offers a kinetic energy advantage of about 300 ft. lbs. at the muzzle, 250 ft. lbs. at 100 yards and 175 ft. lbs. at 200 yards. These significantly higher kinetic energy levels—combined with the nearly 50% larger diameter hole it punches—arguably make the 7.62×39 a superior cartridge for urban warfare and personal defense. That’s one of the main reasons why you see so many military contractors and special operators running around with AKs on TV.

Rock River Arms is certainly not the first AR maker to offer a 7.62×39-chambered AR-15, but it is one of the few doing right. The company’s LAR-47 is offered in two different configurations: The LAR-47 CAR A4 ($1,270) and the LAR-47 Delta Carbine ($1,545). Both are A4 flat-tops, and aside from the CAR A4 having a gas block with 3-slot top rail and sling loop (as opposed to the Delta Carbine’s low-profile gas block), the two models differ only in their furniture. A tricked-out X-Series version is reportedly on the way soon.

The CAR A4 is fitted with a 6-position Tactical CAR stock with round comb and fixed sling loop. The upgraded Delta Carbine gets RRA’s innovative, 6-position Delta CAR buttstock with triangular-profile comb for an enhanced cheek weld, quick-detach, full-rotation sling swivel receptacles on both sides, two-piece rubber butt pad—the lower section has a push-button release for access to a battery storage compartment in the lower tube and a full-length Picatinny rail molded into the bottom surface of the lower tube.

The CAR A4 is fitted with Mil-Spec A2 pistol grip, while the Delta CAR gets and textured rubber Ergo SureGrip. Mil-spec M4 handguards appear on the CAR A4, but he Delta Carbine is fitted with a two-piece, 6.5-inch long, highly ventilated, machined aluminum quad-rail handguard. The 15-slot Picatinny top-rail is not continuous with the upper receiver’s top-rail, there bring about a 1-inch gap between the two. The two-12-slot side rails have full-rotation, quick-detach sling swivel receptacles front and rear, and the 13-slot bottom rail has a single full-rotation, quick-detach sling swivel receptacle at the forward end.

The CAR A4 weighs 6.4 lbs. empty, while the Delta CAR tips the scales at 7.75 lbs. The Delta CARs two-piece rubber butt pad ads 1/2” to the extended overall length, making it 36.5 inches. Both models come with an RRA lockable plastic hard case and one 30-round polymer  AK-47 magazine.

Our evaluation rifle was the LAR-47 Delta Carbine, and everything you’re about to read applies equally to the LAR-47 CAR A4. While the upper and lower receivers are quite similar in appearance to those of a Mil-Spec AR-15, both are RRA proprietary designs forged and machined from aero-space grade aluminum alloy. The external differences in appearance are necessitated by head size and forward-raked angle of the AK magazine, and the way it locks into the lower receiver.

The magazine well is cut high on at the front end to accommodate the forward rake, and the mag release has been completely redesigned. Mounted on the rear of the mag well, inside the rifle’s elongated winter trigger guard, the mag release consists of an ambidextrous paddle that is pushed forward with the tip of either trigger finger to drop the magazine. The magazine is inserted the same way it’s done with an AK-47—holding the magazine almost parallel to the handguard, just shove her into the front of the mag well and swing the body of the magazine down and to the rear to engage the magazine lock. The LAR-47 will accept most steel Mil-Spec AK-47 magazines, and all ones we tried fit and functioned just fine.

Controls consist of a Mil-Spec safety selector, forward assist and cocking handle. The traditional AR mag release button and bolt release lever mounted on the left side of the lower receiver have been eliminated altogether. Like the AK-47, the LAR-47’s bolt carrier does not lock back in the open position on an empty magazine. The trigger is RRA’s 2-stage model, one of the best factory-standard AR triggers we’ve used. The first stage consists of 1/8” of trigger travel at a pull weight of 2 lbs. 0 oz. With 3.0 more pounds of pressure, the trigger breaks crisply with and almost no perceptible trigger movement, and no creep or stacking.

The LAR-47 is fitted with a 16-inch, heavy-profile, chrome-lined barrel rifled at a 1:10” right-hand twist. An A2 birdcage flash hider is mounted at the muzzle via 5/8 x 24 threads. The bolt, bolt carrier and gas key are all chrome plated, and except for the larger recess in the bolt face to accommodate the 7.62×39 cartridge head, and bit of extra mass in the bolt carrier, you wouldn’t know that you weren’t looking at the guts of any direct-gas-impingement operated, 5.56 NATO chambered AR-15.

For testing we installed a Blue Force Gear Vickers 221 sling, mounted a Magpul a pair of MBUS Pro steel flip-up iron sights front and rear and a Trijicon SRS Reflex sight with 1.75 MOA illuminated red dot. We used both the SRS and the MBUS Pro sights for reliability testing at 25 yards on our Salute Products steel-plate targets. The rifle transitioned easily between targets, perceived recoil was about equal to that of an AK-47—a bit heavier than a 5.56 NATO chambered AR—and we experienced no failures of any kind with the variety of magazines used for testing.

Shooting from the bench at 100 yards, the Hornady 123-gr. Z-Max Zombie Defense turned in the best 3-shot measuring 1.04” center to center. With this Hornady ammo, the LAR-47 was a very consistent 1-MOA shooter. All of the other brands of ammo printed groups running from 1.35” to 2.18″. Only one failure to feed was experienced using the Herter’s ammo.