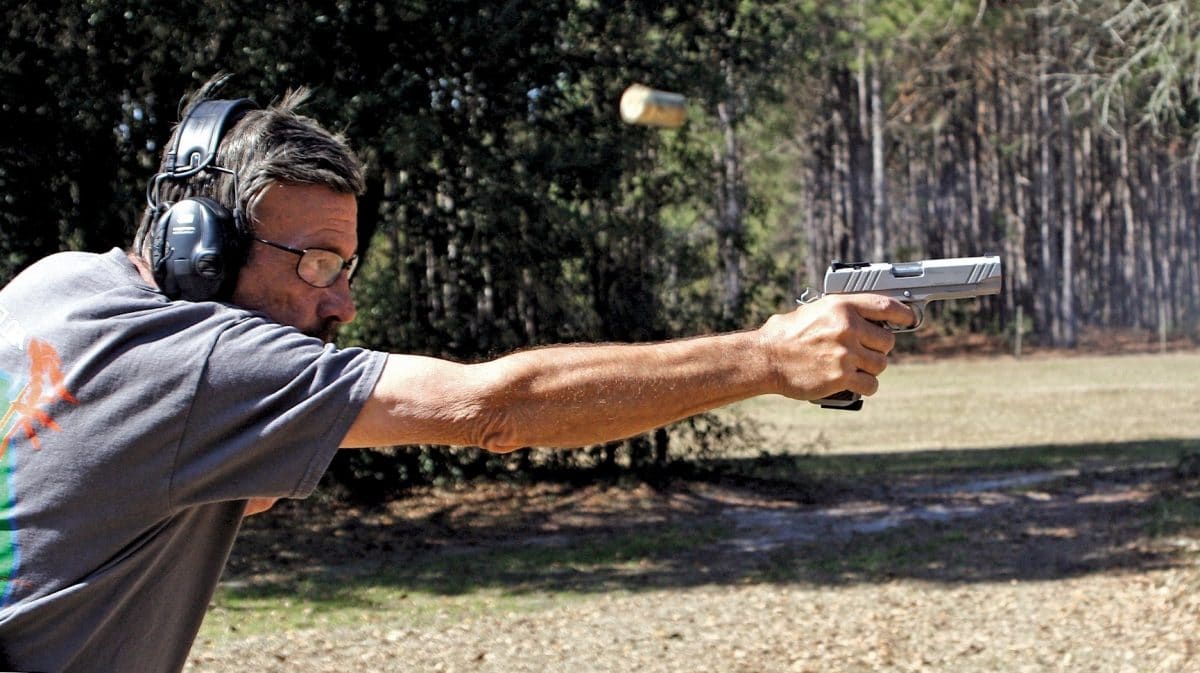 Thanks largely to its angled-down edges, that excellent rear sight didn’t catch on anything. The rough Predator G10 grip panels might have been harsh on bare skin, but gave no discomfort to the wearer through a tee shirt, and the outer panel did not seem to catch or drag on covering garments, which were variously cotton and Gore-Tex. (Why Gore-Tex? ‘Cause there were monsoon-ish rains, which made me glad the Marvel Nighthawk was stainless!)

There were nits to pick. While the oversize slide release lever hastened speed reloads, it protruded enough to be a pain in the butt in terms of holster fit. Some of us would have preferred an ambi thumb safety. Secondly, the sights shot left for all of us out of the box. The extraordinarily tight test target included with the gun, fired from the bench at 15 yards by Nighthawk’s David Atchly, printed that one hole group dead on. Maybe the tester’s eyes were simply different from ours. In the end, that’s what adjustable sights are for, not to mention allowing the serious shooter to dial in for a variety of loads. The Nighthawk magazine that came with it seemed to tilt its topmost round downward, but that never interfered with feeding. The recoil spring system will make takedown more complicated than what the U. S. military may have taught you with the GI 1911A1.

The nitpicking was far outweighed by the accolades. The light stippling atop the slide for hand traction (it looks “antiqued”) was a pleasant touch. The trigger was all we could ask for in an all-around 1911 that might see street or home defense duty. Frame checkering and grip surface absolutely prevented gun shift in the firing hand, without being painful or abrasive to any of the several testers. Reloads were fast. Accuracy lived up to the promise of its manufacturer.

As promised, recoil was soft and controllable. How much of that was due to Marvel’s unique recoil spring system, none of us could discern—we were all accustomed to controlling this level of recoil at speed already. However, the promised 10,000 round service life of the recoil spring system can’t be a bad thing. For perspective, Nighthawk recommends that conventional recoil springs be replaced at 2,000 rounds, the springs on 4.25” guns like this one at 1,500, and with 1911s with 3- to 3.5-inch, at 50 rounds.

Accurate and reliable, designed by shooters for shooters, the Marvel pistol is the child of some of the most brilliant thinkers in the 1911 universe, and will carry great pride of ownership. Its performance comes at a price—$3,995 suggested retail—but such prices seem to be the table stakes today if you want to play the game with the finest of 1911 pistols. See the Marvel Nighthawk at your firearms dealer, or for more information contact Nighthawk Custom, Dept. OT; Tel.: (877) 268-4867; Web: www.nighthawkcustom.com