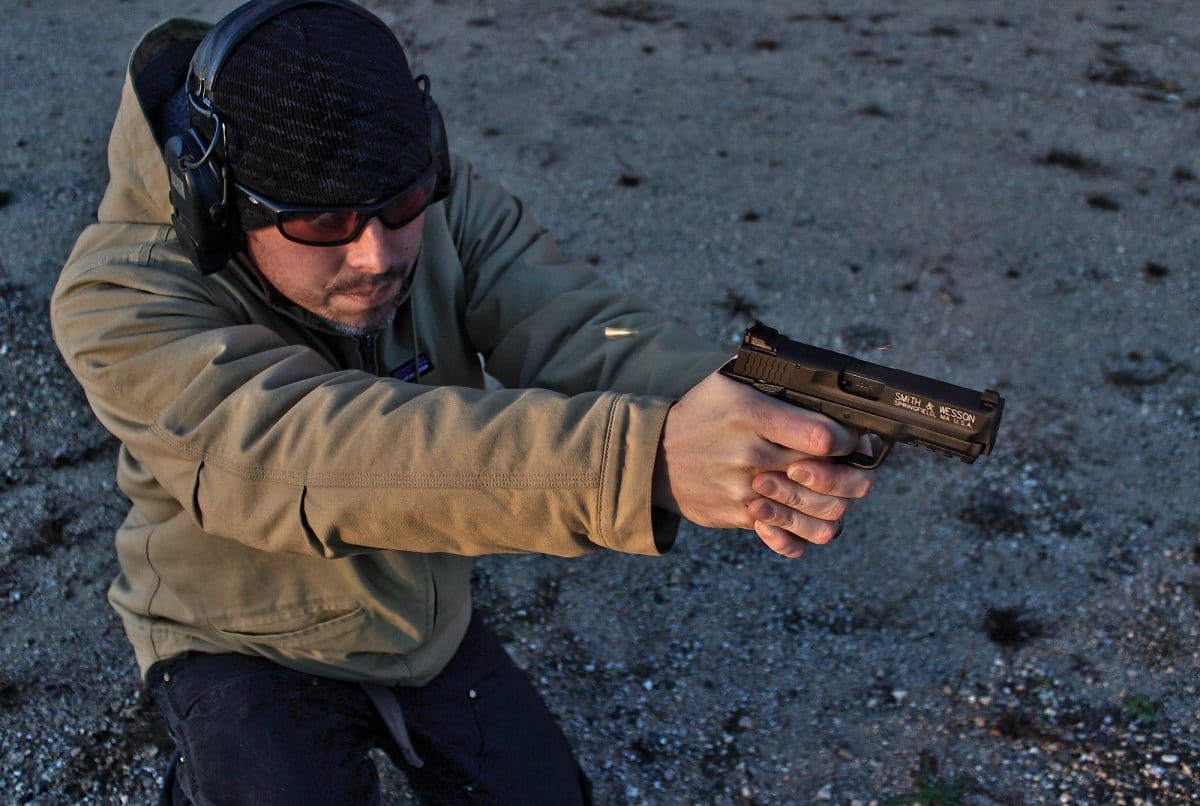 There’s no doubt that the M&P line of semi-auto pistols has been a huge shot in the arm for Smith & Wesson. Introduced in 2005, the M&P pistol has since been adopted by military and law enforcement agencies in 30 foreign countries, as well as six U. S. government agencies and almost 300 American state, county and municipal police departments. Our very own New Hampshire State Police is one of them, issuing the M&P45 as its standard duty pistol.

The new M&P22 Compact ($419) is a slightly scaled-down, pretty close look-alike of the centerfire M&P9. Visual differences include a slightly shorter barrel (4.1” vs. 4.25”) and a correspondingly shorter slide, and both the frame and grip are about 1/2’ shorter than those of the M&P9. The slide is made from machined aluminum rather than steel, and the grip lacks the “big gun’s interchangeable backstrap panels. The M&P22 Compact comes with two 12-round steel magazines (10-rounders where required) and 3-dot steel sights dovetailed into the top of the slide. The rear sight is adjustable for both windage and elevation.

On the inside, however, the blow-back operated M&P22 is a totally different animal. It is hammer fired—as opposed to striker fired like the centerfire M&Ps—and the slide recoils over a fixed barrel. It shares the articulated trigger shoe of the centerfire M&Ps, but the internal trigger components are quite different in both appearance and function. The M&P22 Compact is also substantially lighter than the M&P9—15.2 oz. empty without magazine vs. 24 oz.

Features common to both the rimfire and centerfire models include the overall appearance—the M&P22 Compact looks just like an M&P9, just a bit smaller—scalloped rear slide serrations, 3-slot equipment rail molded into the frame’s dust cover, similar looking and operating controls placed in the same general locations, and the external key lock common to all M&P pistols. The M&P22 Compact has an internal drop safety and the M&P’s standard articulating trigger safety. It also has ambidextrous manual external safety levers and a magazine disconnect safety (both of which are optional on the M&P9), which we consider to be very smart additions to a pistol that has a high likelihood of being used by young and/or inexperienced shooters.

We’ve found in the past that .22 LR pistols generally don’t care for standard-velocity ammunition, as it doesn’t have sufficient recoil energy to fully cycle the slide and reliably chamber the next round. Accordingly, we tested the M&P22 Compact for functioning and accuracy using two different 40-grain high-velocity .22 LR loads. The first was CCI’s tried-and-true Mini-Mag copper-plated round nose (1,235 f.p.s./135 ft. lbs.), a round that long ago earned its place in the hearts of America squirrel and rabbit hunters. The other load was a case of first impression for us: Aguila’s new Eley-primed, .22 SuperExtra copper-plated round nose (1,255 f.p.s./140 ft. lbs.). We’ve been very favorably impressed with the Mexican-made Aguila center-fire ammunition we’ve tested recently, so we had high hopes for their .22 SuperExtra load.

Functioning was 100% with both loads, with no failures to feed, fire, extract or eject in over 100 founds fired. To avoid “4+1” syndrome—frequently caused by the first round being chambered by manually releasing the slide—we loaded each magazine with six rounds, fired the first one off target, then fired the next five mechanically chambered rounds for accuracy.

Like many semi-auto pistols—especially those chambered in .22 LR—the M&P22 Compact demonstrated a clear preference between the two loads. From the bench at 15 yards, the CCI Mini-Mag’s best 5-shot group measured 2.60” center to center, with the best three going into 1.38”. The Aguila .22 SuperExtra bettered the CCI Maxi-Mag’s best 5-shot group by nearly an inch, printing a “best-of-test” 5-shot group measuring 1.63”, with a best-three of 0.56”. All groups with both brands of ammo centered about 1.5 inches high and 1.5 to the right of point of aim, but no biggy there. That’s what adjustable sights are for.