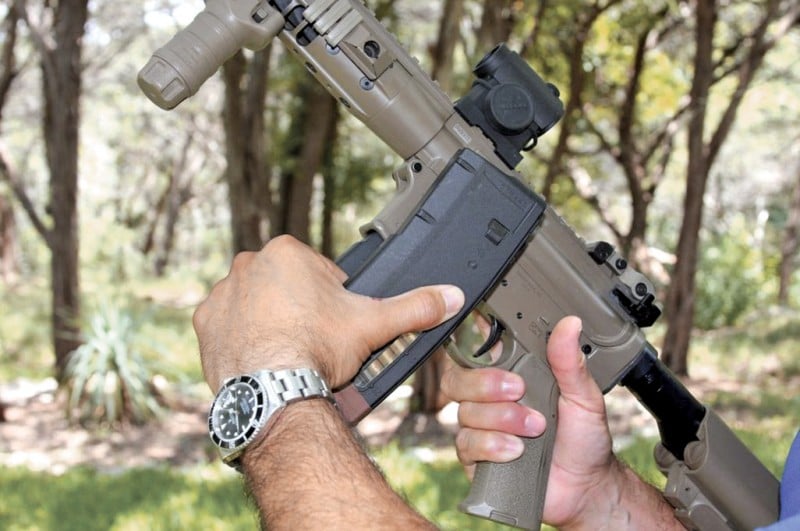 Let’s say that you had to employ your firearm in the immediate defense of life. And let’s say you expended most of your ammunition in the process of neutralizing the threat. Now what?

Ammunition management is the process of “topping off” your firearm. There are three principal methods available: first is a combat reload, then a speed reload and lastly a tactical reload.

A combat reload is pretty simple: You have completely expended your primary ammunition source; i.e., you have run out of ammunition. In a perfect world the threat would be neutralized, but you can’t bet you life on that. You should assume there is still an active and immediate threat, so the urgency to get back in the fight is compelling. The combat reload is done in a two-way gun fight where rounds are still being fired, outbound and inbound.

So, what is the difference between a speed reload an a tactical reload? The only difference is that with a speed reload you discard the magazine, while in a tactical reload you retain it. Some folks will get all bent out of shape about how discarding a magazine could be a tactical error, and that they may need that magazine later. In reality, the chance of the average citizen being involved in an extended gunfight is pretty remote; and an extended gunfight where a retained magazine made the difference in winning is even further down the remote road.

You really have to ask yourself, “What is the tactical imperative?” If you believe the original threat could still be a threat, or that additional threats could be present, then topping off as quickly as possible is the right move. If you don’t think additional threats are possible, but you still want to top off, then there is less urgency and so retaining the magazine is a better choice.

Of course, all of the foregoing is based on the assumption that you have a spare magazine in the first place. Let’s say you have a single spare magazine—which is fairly common in the typical concealed-carry scenario. After you respond to an immediate threat to your life with lethal force, you need to start asking yourself some important questions.

Questions like “is he down” and then “is he out.” Before you can perform any form of ammunition management, the situation has to allow for it. If there is still an active threat, then immediately return accurate and effective fire. If no immediate threat, then look for additional threats, perform a good scan of your area and, if reasonable, seek cover or at the very least change positions.

At that point it makes sense to consider which type of way reload to perform. In reality, it will be pretty clear which way to go. Take some time to consider your options, practice both in advance and then let the situation dictate.