Home Training and Tech The High Ready – Rifle or Pistol? The Realities of Home Defense 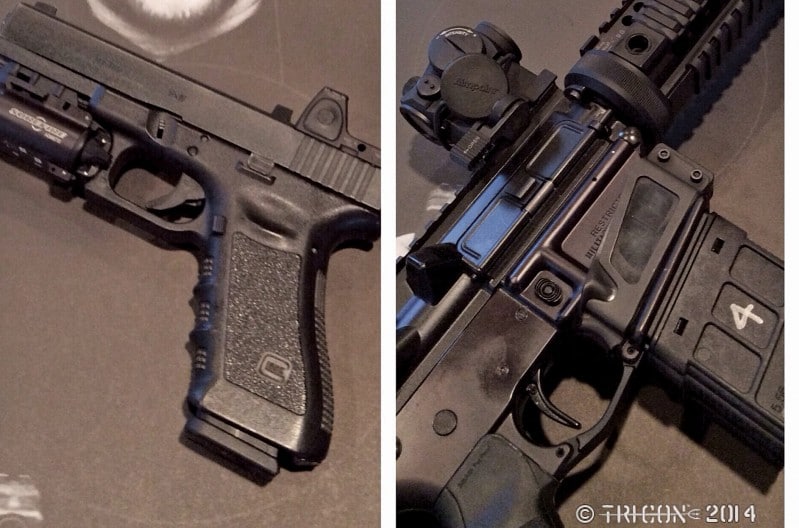 A common question we get regarding home defense is whether the home owner should use a rifle or a pistol. For about 90% of the population our advice may seem counter intuitive, but hands down, we recommend the pistol.

First off, the advantages of a rifle. There are several, but a few that are brought up for home defense situations center around increased lethality, increased capacity, day/night target acquisition (with a red-dot sight) and increased accuracy. Agreed on all accounts. Most defensive rifle cartridges offer increased lethality over defensive pistol cartridges. If all things are equal as far as shot placement is concerned, the balance definitely tips in the rifle’s favor. Even my 17+1 capacity defensive pistol still comes up short compared to an AR rifle’s standard 30-round magazine. I could add a +2 extension to my pistol magazine, but I could also jump up to a 40-round rifle magazine. Target acquisition in any lighting conditions can be achieved with a red-dot sight (like the excellent Aimpoint Micro T1) used in conjunction with a powerful white-light illuminator (such as the Surefire Mini Scout 300a). Not all bumps in the night are lethal threats, so good white light illumination is critical when in search mode, while the ability to quickly and accurately engage a hostile threat with confidence is provided by a well-zeroed red-dot sight.

So why dog the rifle so much? Let’s put things into perspective; if you had no reason to pursue an unknown threat through your home, and could strong-point in your master bedroom to wait for the police to arrive, then a rifle will, hands down, be the better option.

If, on the other hand, you have to get up to investigate a disturbance the rifle adds some complexities most folks will have a hard time dealing with in the middle of the night. While the rifle has all the advantages listed above, it also has a few disadvantages to consider. It will be heavier, it requires two hands to employ accurately and effectively, it is more cumbersome in tight quarters and if you have to carry or herd small children or family, it will be very difficult to do both.

This is where a good home defense pistol comes in handy, and my recommendation is to select a model with the highest magazine capacity available. You can get caught up in the caliber wars, but 9mm offers a huge advantage—the greatest magazine capacity of all centerfire defensive pistol cartridges. Do not rely on the extended-capacity magazine add-ons commonly seen. Not that they are a bad idea, but start with the highest capacity standard magazine, then consider magazine extensions a bonus.

Most of today’s semi-automatic pistols come equipped with a utility rail that allows attachment of a powerful white-light illuminator. It is one thing to simply attach the light to your pistol, but a whole other thing to employ it effectively, so practice is critical before you’re posed with a life-threatening ordeal. Highly visible night sights and/or mini-red dot sights are the last pieces of the puzzle to be considered—the latter of which certainly level the playing field between pistol and rifle. These sights give the end user the same benefits as they would on a rifle.

If you haven’t already conducted home-defense drills—where you move through your home in order to secure a position to strong-point—I highly recommend doing so. Follow all safety guidelines and practice with both a rifle and pistol. In the process, imagine having to herd family members, work doors, or worse, fight while injured. Regardless of which type of weapon you decide to deploy, it’s an excellent idea to take advantage of qualified trainers in your area.