In the time of the single-stack, striker-fired 9mm pistol, we review two of the guns that started—and still maintain—the paradigm.

Work as a gun writer for a while, and it won’t be terribly long before you get jaded. You go to an industry show, look at all the new stuff, and moan, “Good Lord, is this all that’s new?” For us old guys who’ve been in the business for a while, that’s not a new thing . . . which is why I still remember that day at the SHOT Show in the mid-1990s when I found myself at the tiny booth with a new name in the Industry: “Kahr Arms.”
The guy behind the booth, Justin Moon, was the designer and at that time pretty much sole proprietor. And what he had was special: a striker-fired 9mm pistol, super-slim for concealed carry thanks to his patented offset feed ramp. Amazingly well-made. With a double-action trigger pull so smooth and light it felt as if it didn’t have a mainspring. He called it the Kahr K9. 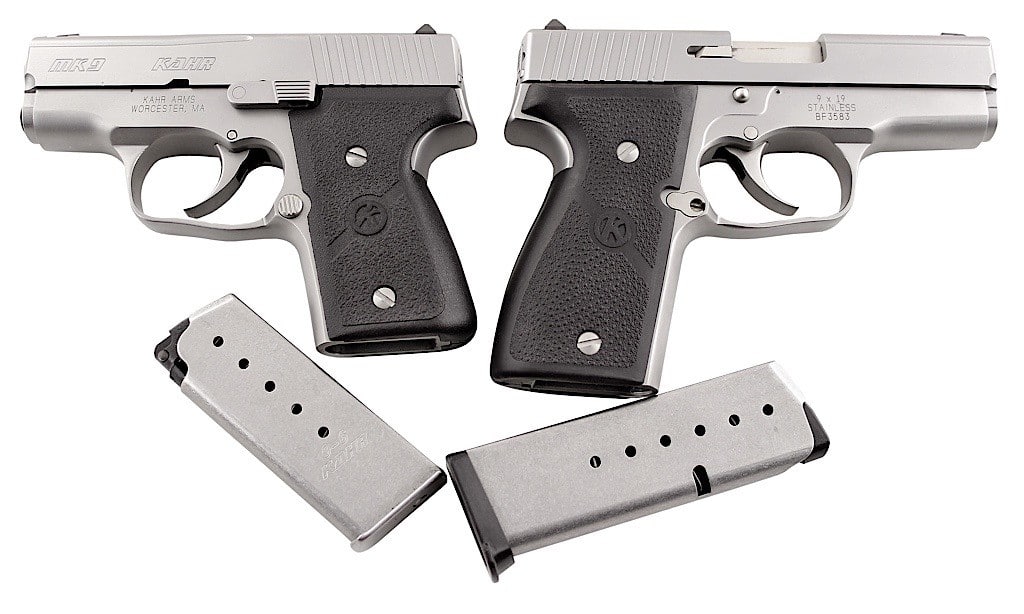 Cynic that I was and am, my BS alert went off. I asked him to send me a gun to test, and left thinking, “This is vaporware. He can’t mass produce a gun that smooth and that cool, that actually works, at the low price he’s quoting.”
Justin Moon and Kahr Arms proved me wrong. Soon, the Kahr P9 was out. Its blue steel finish wasn’t the best, but everything else was exactly as I’d seen on the prototype. When I was able to put five Federal 9BP rounds into 1-3/8 inches off the 25-yard bench, I was hooked. I bought the test sample, had it refinished, and suggested he make it in stainless. So did many others. He listened, and did. My first stainless K9 proved to be a keeper, too. And so did his next, down-sized version, the Micro-Kahr 9mm MK9.
We shooters are never satisfied, and the next wave of feedback from the customers was, “OK, it works and we love it, but can’t you make it lighter?” Justin Moon listened yet again, and soon we had the polymer-framed Kahrs which are today the company’s best-selling products.
But those all-stainless guns from the early days remain in the line for a reason, and that’s why On Target is writing about them now.