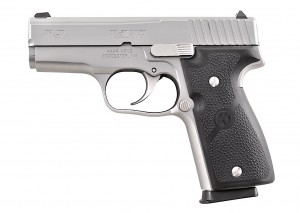 At 25 ounces unloaded, the stainless K9 ($880) was comfortable enough to carry that circa 1996, I was carrying one all-steel K9 in an Alessi ankle holster and the other on my hip in a Ted Blocker LFI Concealment Rig, and felt pretty darn comfortable with both, and of course a spare mag or two.
Recoil is extremely mild. It’s surprising how little more the polymer Kahrs kick, but if absolutely minimal recoil is one of your concerns, the all-steel Kahr should meet your needs. Years after meeting Justin Moon, he told me that he had read my writing and that of Evan Marshall, and based on that had built these guns to run with hot +P+ 9mm ammo. Almost 20 years later, having seen 147-grain subsonic ammo make great advances in loads like the Winchester Ranger-T and the Federal HST performing well “on the street,” I’m still seeing such impressive wound channels and police satisfaction with 115-grain +P+ and Speer’s 124-grain +P that I’m more comfortable carrying a 9mm Kahr with that kind of ammo. It seems to handle those hot loads with aplomb. I do know, however, of one department that found their super-hot Winchester 127-grain +P+ was beating up the Kahrs in constant qualification shooting, and switched to 124-grain +P Winchester bonded to solve the problem. 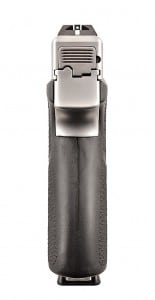 The soft “rubber” grips on the K9 feel sweeter to my hand than the other Kahrs. The frame lets me get all the fingers onto the grip-frame, while still being extremely concealable in a forward tilt holster.
I’ve always found Kahrs to be subject to “4+1 syndrome,” with the first hand-chambered round landing away from subsequent automatically-cycled ones. From the 25 yard bench and a Matrix rest, this test K9 put all five in 3.40” with Winchester’s economy white box 115-grain FMJ. Shots 2 through 5 landed in 2.55”, and the best three of those, in only 1.80”. The same brand’s 147-grain subsonic FMJ did 2.55” for the best 5-shot group, with the last four in 2.10” and the best three in 1.20”. SIG’s new V-Crown 124-grain JHP yielded a 5-shot measurement of 2.95” with the last four shots in about half that, 1.45”, and the best three in 1.20”. Not at all bad for a compact pistol with a 3.5” barrel. 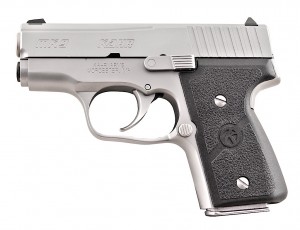 While you can hide a K9 in an ankle holster (I used to, regularly), the shorter butt of the MK9 ($880) is still less likely to bulge there, and much more amenable to pants pocket carry than its larger brother. Only you can assess what’s small enough to fit your particular dress code and need for discretion. The price is only one round . . . and that’s if you choose the short magazine. Like the K9, the MK9 comes with two, but unlike the larger pistol it’s accompanied by a short six-round concealment mag and a longer 7-rounder, for reloading or for when you’d rather have one more shot at the tip of your trigger finger. With less steel at muzzle and butt, the MK9 is about two ounces lighter than the K9. I have to tuck my little finger under its shorter butt, which sacrifices a small amount of control. The MK9 comes with hard composite grips, flat for concealment but not quite as “comfy” as the K9’s neoprene. The flat grips make right-handed shooters more wary of the thumb-nicking sharp edge at the rear corner of the slide stop lever. 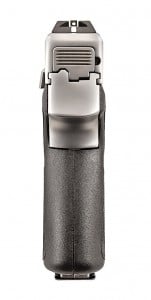 A big advantage of the MK9 is that because its recoil spring guide comes almost parallel to its muzzle, if you press straight in against your opponent’s body and pull the trigger, the MK9 will fire. It’s called “stand-off capability.” With the K9, that same press will force the longer barrel/slide assembly just far enough out of battery that the pistol won’t discharge, as happens with most auto pistols.
On the range, the MK9 hit a bit low for me, because I was using a 6 o’clock post-in-notch sight picture on the aiming dot, while the test pistol was obviously sighted to hit where the white dot was painted on its front post, below the top edge. When using the “dot the i” sight picture and using the front dot as an aiming reference, the MK9 hit to point of aim.
The “4+1” element was more pronounced with the subcompact Kahr. 115-grain Winchester FMJ from 25 yards gave a disappointing 8.75” 5-shot group counting the first, un-called flyer; the next four went into 4.55”, and the best three were in 2.35”. The little MK9 redeemed itself with the 124-grain SIG V-Crown JHP: 2.80” for all five, 2.60” for the last four, and 1.50” for best three. The more I shoot this SIG-brand ammo, the more I appreciate its accuracy. 147-grain Winchester subsonic FMJ spread its 5-shot group to 5.60” due to the first shot, while the next four were in a diamond pattern that went 3.05” whether measuring best three or best four, which happens rarely.