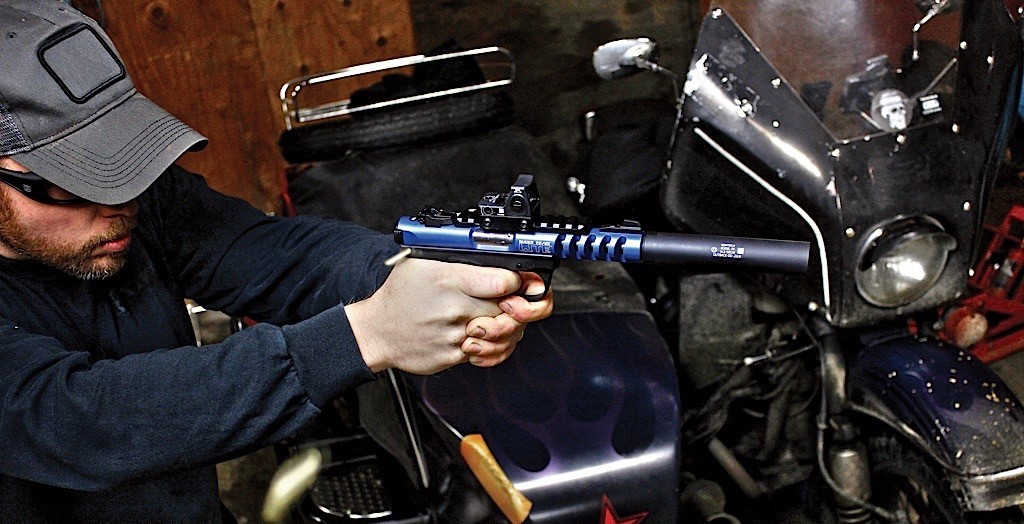 The pistol cycled high-speed ammo without a hiccup, and performed flawlessly with Eley Match. But the Federal and PMC didn’t have enough oomph for sure function. Failures to pick up the next round, and stove-piping, were common. This pistol was made for frisky plinking and hunting ammunition. I tried no sub-sonic loads. From the 4.4-inch barrel, nearly all Long Rifle loads clock below the speed of sound (1,127 f.p.s. at sea level). It’s also worth noting that Editor Ben Battles tested a different sample of the same pistol using a Trijicon RMR mounted to the optics rail, a Gemtech Outback II sound suppressor threaded to the muzzle and firing Aquila’s 40-grain SuperExtra load. He reports that suppression was outstanding with the Gemtech, and functioning flawless with the Aquila fodder.

With a short, iron-sighted pistol, I usually do well to keep groups around an inch and a half from 25 yards. Some days, two inches is a blessing. Right away the 22/45 Lite delivered 2-inch groups with high-speed loads. From a machine rest it would no doubt beat that. I was delighted by a 1-inch knot from the Federal Match. And, to be honest, surprised. Firing the Lite accurately was difficult. The grip and balance passed muster. The trigger did not. It had lots of take-up, and broke at a measured 6/5 pounds—more than four times the pistol’s weight! A colleague tested a Lite with a 4.5-pound pull; I suspect my sample has a pull near (or over!) the top end of spec.
Save for its trigger, the new Ruger 22/45 didn’t disappoint. It should rank high on a list of “carry” pistols for the woods, whether you holster it or toss it in a backpack. You’ll hardly feel 23 ounces
Each current 22/45 Lite comes with a soft case and two magazines. The pistol retails for $515—$16 more than it did last year. If you think Rugers aren’t investments, let me know if you still have one of those 37-dollar Red Eagles. See the 22/45 Lite at your firearms dealer, or for more information contact Sturm, Ruger & Co., Dept. OT; Tel.: (603) 865-2442; Web: www.ruger.com