Built by professional trigger-pullers, this may be the best value going today in high-end combat carbine’s 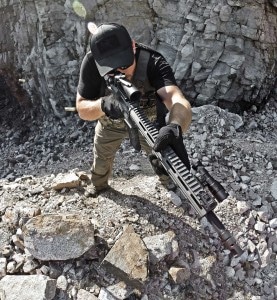 We’re never surprised to hear of a new player in the AR market, but we are by one that has a post office box about six feet from our own. That new player is Daemon Defense, a Special Forces Veteran Owned Small Business located right here in the White Mountains of New Hampshire.

One of our staffers heard about Daemon Defense through a friend, and set up a visit to their shop. He was so impressed with the quality of their guns that he arranged to have one shipped (actually, delivered) to our office. When the rest of us got a look at it we decided it was time to put this new company on the map.

Daemon Defense manufactures five versions of their direct-gas-impingement operated OPR-15 AR: three carbines, a pistol and an SBR (short barreled rifle). They were designed by from the ground up with input from the Army Special Forces and the law enforcement Special Operations community—experienced military trigger-pullers all, who have honed their skills in places ranging from the streets and back alleys of Iraq and Afghanistan to the dusty corners of the Third World. The carbine variations include the standard OPR-15, a limited-edition (100 total) Army Special Forces version with OD Green anodized lower receiver and engraved Special Forces motto, and a state compliant model. All are available chambered in 5.56 NATO or .300 Blackout, and all are priced at $1,599. Our evaluation carbine was the standard OPR-15 chambered in .300 Blackout.

The lower and A4 upper receivers are CNC machined from aerospace-grade billet aluminum, and finished in either a black or OD-green colored Type III hard anodizing as standard. Our sample rifle was finished in a great looking, “granite-grey” Cerakote (an optional $149 upcharge) that provides an eye-catching contrast with the black furniture, barrel, muzzle brake and trigger. The handguard is finished in the same color. The upper is machined in a blocky profile, with big side flats, a huge shell deflector and an oversize, flat-sided forward assist housing. The machining profile of the lower receiver complements the upper nicely, and has all of the standard controls in their usual locations. Two unique departures from Mil-Spec are a heavy, integrally machined trigger guard and a very widely flared magazine well. A Magpul ASAP ambidextrous sling plate is fitted at the rear of the lower receiver.