The pistols I’ve come to call “slim-nines” are steady sellers in the concealed carry market. Slim and flat, ideal for inside the waistband carry or even toting in the pockets of less than skin-tight clothing. Seven to nine rounds of full power 9mm Luger ammo on board, and soft enough recoil to allow for serious “shootability.” 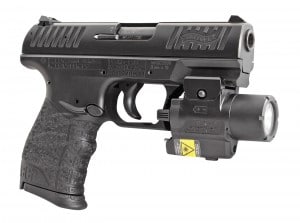 Walther has already done very well in that market with their PPS pistol. Now, they’re expanding with a low-priced handgun in the same genre: Meet the Walther CCP.

Let’s go to the source before we go to the product. My understanding is that Walther is a family member of Umarex, best known for its quality airsoft guns, and further that the CCP is made at the Umarex factory, not the Walther plant. Offering a low-priced handgun with your brand that was made in another factory is not a new thing in the firearms industry; this senior citizen was a kid when Colt reintroduced their pocket .25 that had been famous since 1908. Only difference was, it was a Spanish Astra re-branded with the Colt logo. It did not turn out to be the most stellar moment in the history of America’s oldest handgun manufacturer.

Not for nothing did Ian Fleming listen to the advice of real-world British gun expert and arm his fictional Agent 007, James Bond, with a Walther PPK. (And even name Bond’s armorer “Major Boothroyd” in the subsequent novels.) Bond was created as a connoisseur of fine watches, fine automobiles, and bespoke suits from Saville Row: the prestige of the high-quality German Walther brand fit right in for such a man’s “carry gun.”

In that sense, the Walther CCP (Concealed Carry Pistol) is not seen as a “true Walther” by gun purists. I get a sense that it is marketed as a functional defensive handgun for someone who wants the reassurance of a name badge associated with high quality, and does not have a large budget for guns. So, let’s just look at it as a concealed carry 9mm with a roughly $400 price point, and leave the name (and any attendant “gun snobbery”) out of the discussion.

A tad over an inch thick at its widest point, the CCP’s frontal profile tapers toward the top of the slide. Grip length allows all of my medium-size adult male fingers to get onto the gun, thanks to the slight flange at the bottom of its magazine, which holds eight rounds and brings capacity up to nine with one in the spout. The frame is polymer and the  slide—while it resembles Zamac—is Cerakoted stainless steel. This is a striker-fired, single-action pistol. Walther states adamantly in the owner’s manual, “CAUTION SINGLE ACTION ONLY! THE WALTHER CCP IS DESIGNED AS A SINGLE ACTION MODE PISTOL. EVERY TIME YOU RETRACT AND RELEASE THE SLIDE THE STRIKER IS COCKED.” (All caps and exclamation point are Walther’s, not mine.) There is a manual safety: up is safe, down is fire, and it’s right hand only, because ambi safeties seem to get in the way of “minimum price point.” Having carried single-action auto pistols cocked and locked for more than half a century, this writer has to say, It’s single action – if it’s cocked, and has a manual safety, carry it locked!

The Walther website says, “The CCP’s SOFTCOIL gas-delayed blowback system uses gas pressure from the ignited cartridge by directing it through a small port in the barrel in front of the chamber to slow down and delay the rearward motion of the slide. This is accomplished by means of a piston contained inside a cylinder located under the barrel that opposes the rearward motion of the slide until the gas pressure has declined after the bullet has left the barrel. This allows the slide to end its rearward motion, opening the breech, and ejecting the empty cartridge case.”

Takedown is . . . well . . . different. On the electronic gun forums, there are reports of lots of users running into trouble here. Not a deal breaker: just don’t throw away the manual and, better yet, download the video on how to strip and reassemble the CCP from Walther’s own website, here: http://www.waltherarms.com/ccp/