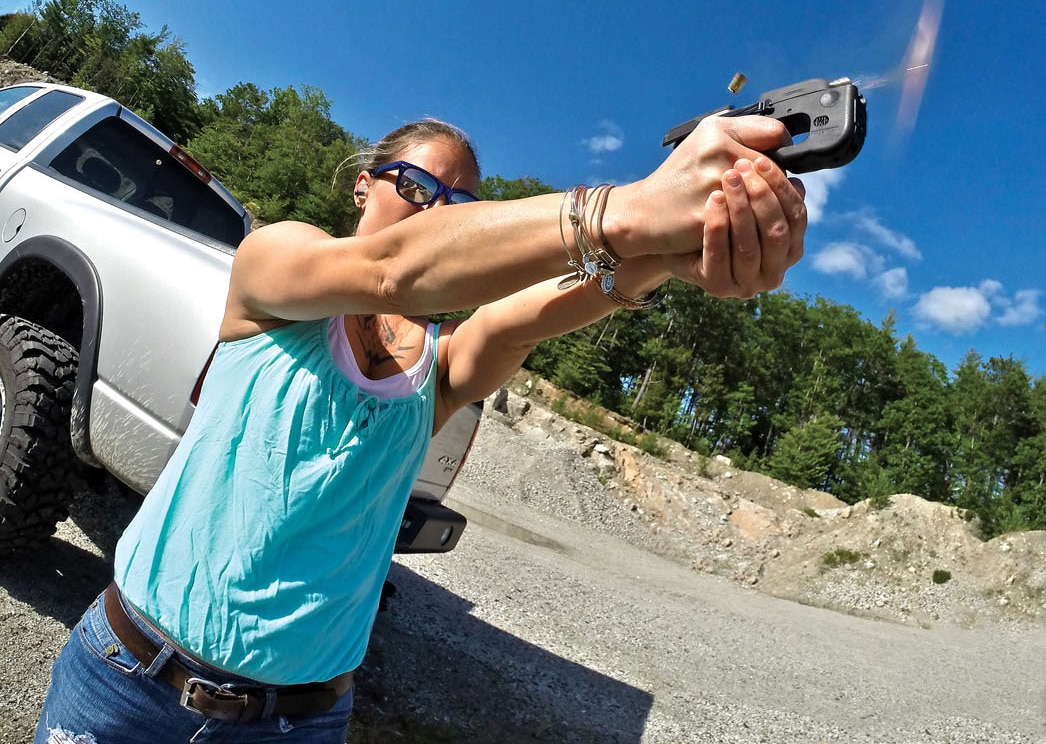 Other features include a completely snag-free exterior design, 2.5-inch stainless steel barrel, a removable (but not reversible) spring-steel belt clip (mounted on the right side, of course), the key-locking Taurus Security System, grip tape on the front and back straps, pop-up loaded chamber indicator, beefy external extractor/ejector, circular indented touch pad to indicate where the tip of your trigger finger should be until you’re ready to fire and a unique “bore-axis sighting system” consisting of horizontal and vertical white lines on the rear of the slide for “instinctual shooting.” There are no iron sights mounted on the slide, so if the laser quits working, the bore-axis sighting system is your only option.

The Curve comes with two 6-round magazines and a molded polymer Trigger Shield that completely covers the trigger to prevent accidental discharge when belt mounted or carried in a pocket, effectively eliminating the need for a holster. The Trigger Shield has a attached to a lanyard that can be looped around your belt, and pulls the Trigger Shield off the pistol when it is drawn.

Another ammunition-related issue involves the prohibition against use of +P or +P+ ammo in the Curve. Taurus is entirely correct in this respect, as SAAMI does not recognize or publish standards for +P pressure ratings for .380 ACP ammunition. In fact, there are only four cartridges that can carry +P rating from SAMMI: 9mm Luger, .38 Special, .38 Super Auto and .45 ACP. And SAMMI does not recognize the +P+ rating in any cartridge. Any .380 ACP ammunition purporting to be +P or +P+ rated is operating at unknown pressures and should not be fired from any .380 ACP-chambered firearm.

During testing we found the Curve to be comfortable to wear and easy to conceal when carried in either a hip pocket or inside the waistband using the belt clip. We did’ however, discover a couple of limitations. When carried inside the waistband there’s damned little to get a grip on when attempting to draw the pistol, and regardless of where you carry it, it takes a hefty pull against the lanyard to shed the Trigger Shield.

The Curve is a hammer-fired, double-action-only pistol with no restrike capability; the side must be racked to clear a dead round. The internal hammer is cocked and released by pulling the trigger, but since there is no external spur it cannot be cocked manually. The trigger pulls through a moderately light but extremely long stroke, measuring a full inch in length, and is consistent first round to last. Average trigger pull weight measured 4 lbs. 5 oz. on our Lyman digital trigger pull gauge. There was bit of palpable stacking in the first 1/4” of travel, but the remainder of the stroke was pretty smooth.

Accuracy testing was conducted at 15 yards from a sandbag rest using the laser and the ammo noted above. The Black Hills load printed a best 5-shot group of 3.48” center to center, with the best three going into 1.6”, and best two forming a single elongated hole. The group was centered right to left, but about three inches above point of aim. The SIG SAUER fodder printed a best group of 2.75”, with the best three in a impressive 0.43” cloverleaf. This group centered an inch to the left and three inches above point of aim. The Curve liked the Federal Hydra-Shoks best, with a 1.61” 5-shot group and a best three of 1.1”, with the best two in a single hole. This group centered a half inch to the left and an inch high. There were no malfunctions of any type during testing, but the extremely long stroke length was like the trigger equivalent of the Never Ending Story when trying to shoot for precision. 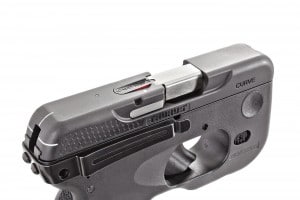 Despite a couple of rough edges that are likely to be smoothed out as production progresses, the Curve is an amazing engineering achievement and a solid and reliable concealed carry pistol.