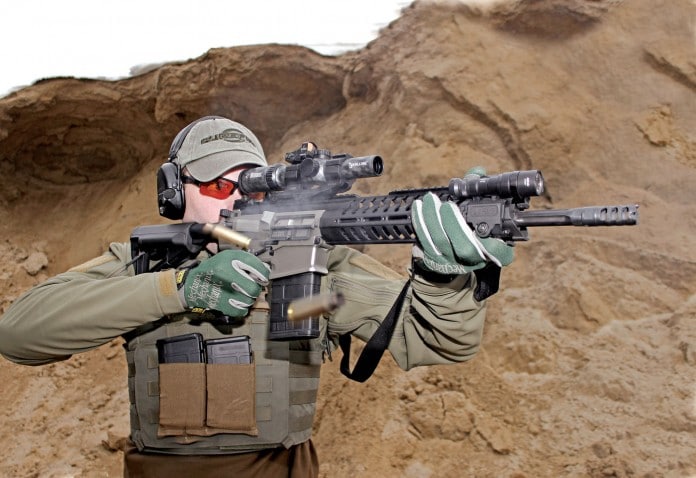 If your interest in AR-pattern rifles runs to the “big iron,” then the 7.62 NATO chambered P308 from Patriot Ordnance Factory (POF) should be on your very short list of new toys to acquire. Its relatively light weight (8.5 pounds empty), cutting edge features, gas-piston operating system, bomb-proof construction and superb precision make it a top-shelf choice for hunting, target shooting and defensive work.

It’s a little-known fact that the first commercially available gas-piston-operated AR-15 was the 5.56 NATO chambered P415, the P308’s little brother. POF’s founder and president, Frank DeSomma, was an aerospace engineer with no prior experience in firearms design, but in 2002 he set out to solve the two most vexing problems plaguing the U. S. military M16 and M4 platforms: excessive carbon fouling, and the M4’s short-barreled timing issue.

The first problem is inherent in the M16/M4 direct-gas-impingement operating system, where a big blast of red-hot combustion gas is delivered directly into the upper receiver to cycle the action. Workarounds adopted by the military included frequent cleaning and lots of lubrication, but this approach became problematic in desert environments where sand and fine dust particles combined with generous lubrication gummed up the whole works.

The short-barreled timing issue of the M4 is a result of its 14.5-inch barrel, which requires a much shorter gas tube than that of the 20-inch barreled M16. Shorter gas tubes result in an over-pressured weapon with critically high bolt speeds that lead to feeding and extraction problems, broken extractors, blown primers and case-head failures. Brute-force workarounds to help force extraction and get the next round chambered included heavy buffers/buffer springs, extra heavy-duty extractor springs, rubber o-rings and high-reliability magazines. But none of these “Band-Aids” directly addressed the short-barreled M4’s real problem: improper gas regulation.

DeSomma realized that these problems never existed in the M1 Garand, M1 Carbine and M14, all of which employed gas-piston operating systems, so he reasoned that if an effective, easily regulated, gas-piston system could be designed for the M16/M4, these reliability issues would go away. The principal result of his efforts was the POF Regulated Short-Stroke Gas Piston System, but while he was at it DeSomma re-engineered the entire weapon system to maximize functioning, reliability and accuracy.

The P308 is offered with black-anodized, OD Green, NP3-coated or Tungsten and Burnt Bronze Cerakoted upper and lower receivers, with prices at $2,729.99. It’s also available with 14.5-, 16.5-, 18- or 20-inch barrels as no-cost options. Our evaluation gun had the NP-3 finish and 14.5-inch barrel. To make it civilian legal, the 14.5-inch barrel has a very effective, 6-port muzzle brake permanently installed to satisfy the 16-inch minimum overall length requirement.