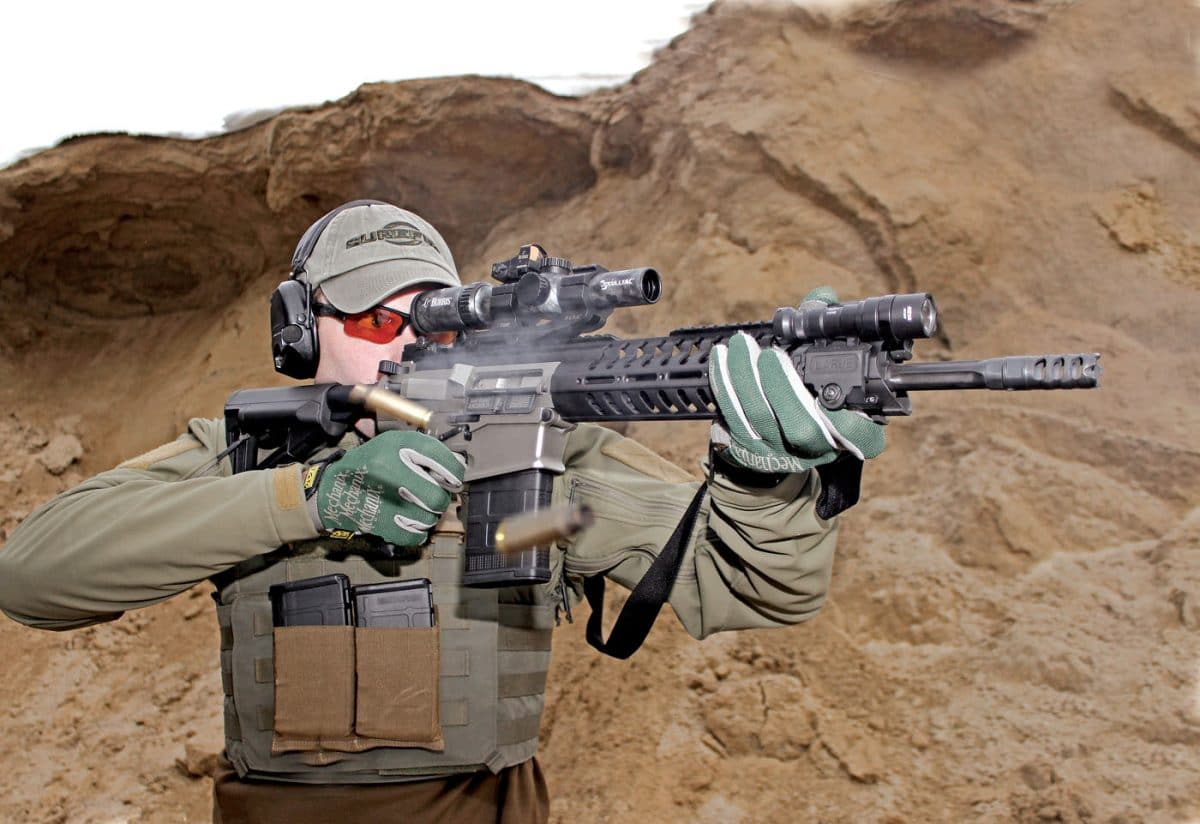 Both the upper and lower receivers are billet machined from 7075-T6 aircraft-grade aluminum alloy, but their shapes and integrally machined features are very different from other AR-10 style rifles. The upper—called the POF M.R.R. (Modular Railed Receiver)—is machined flat on top down to only 1/4” above the ejection port to accommodate the company’s monolithic handguard/top rail system which is made up of two pieces: the reinforced “backbone” receiver to which the barrel is attached, plus a second top piece that includes a free-floating, monolithic handguard/quad rail system. This design removes stress form the bolt area, eliminates receiver flex and strengthens the entire upper receiver. Machined integrally with the one-piece hand-guard is a 22-slot Picatinny top rail, with a 5-slot Pic top rail all the way forward. In between the two integral rail sections is a 7-inch long flat that is drilled and tapped to accept additional rail sections to create a continuous top rail. Flats along the handguard at the 3, 6 and 9 o’clock positions are drilled and tapped to accept as many optional 5-, 12- or 17-slot rail sections as you care to install.

The bolt carrier is machined from 8620 steel and nickel-boron coated. It houses the bolt, extractor and firing pin—all of which are hard-chrome plated—as well as a POF designed cam pin with a novel, NP3-coated roller head that glides along in its channel, enhancing reliability and prolonging receiver life.

The lower receiver features a wide, heavy, integrally machined trigger guard with an oversize opening, and a mag well that is dramatically flared to aid in magazine insertion under stress. Controls are fully ambidextrous, with a safety selector, bolt release and mag release on both sides of the lower. A bolt hold-open lever is positioned in the front edge of the trigger guard and is reachable by the trigger finger. The trigger is a non-adjustable, single-stage, POF design that is among the very best single-stage AR triggers we’ve tested: zero take-up, zero creep, zero stacking and a crisp break at an average pull weight of 3 lbs. 3 oz. The trigger and hammer are secured by KNS Precision stainless steel, non-rotating, anti-walk pins specifically designed for the POF ambidextrous lower receiver.

The P308 is fitted with a Magpul STR 7-position collapsible buttstock mounted on a POF-designed anti-tilt buffer tube that prevents carrier tilt. It also comes with a Magpul MOE pistol grip and one 20-round Magpul magazine. Overall length measures 33.25” with the stock collapsed; 37.25” with it fully extended.

Function and reliability testing was conducted using a Burris Skulltac Combo, which includes a Skulltac 1-4x24mm illuminated-reticle riflescope, Burris P.E.P.R. mount with integral rings and a Burris Fast Fire III reflex sight mounted atop the rear ring. The P308 put fifty rounds on steel  without a failure of any type.

Switching to a Burris 4.5-14×42 AR 7.62 riflescope mounted on the top rail, accuracy testing from the bench at 100 yards revealed a rifle with some serious precision potential. The P308 showed a real preference for Black Hills’ 168-grain Match BTHPs, with a best 3-shot group measuring 0.68” center to center, and the rest all printing under 1 MOA. Hornady 155-grain TAP FPD was a close second, with a best 3-shot group of 0.93”.