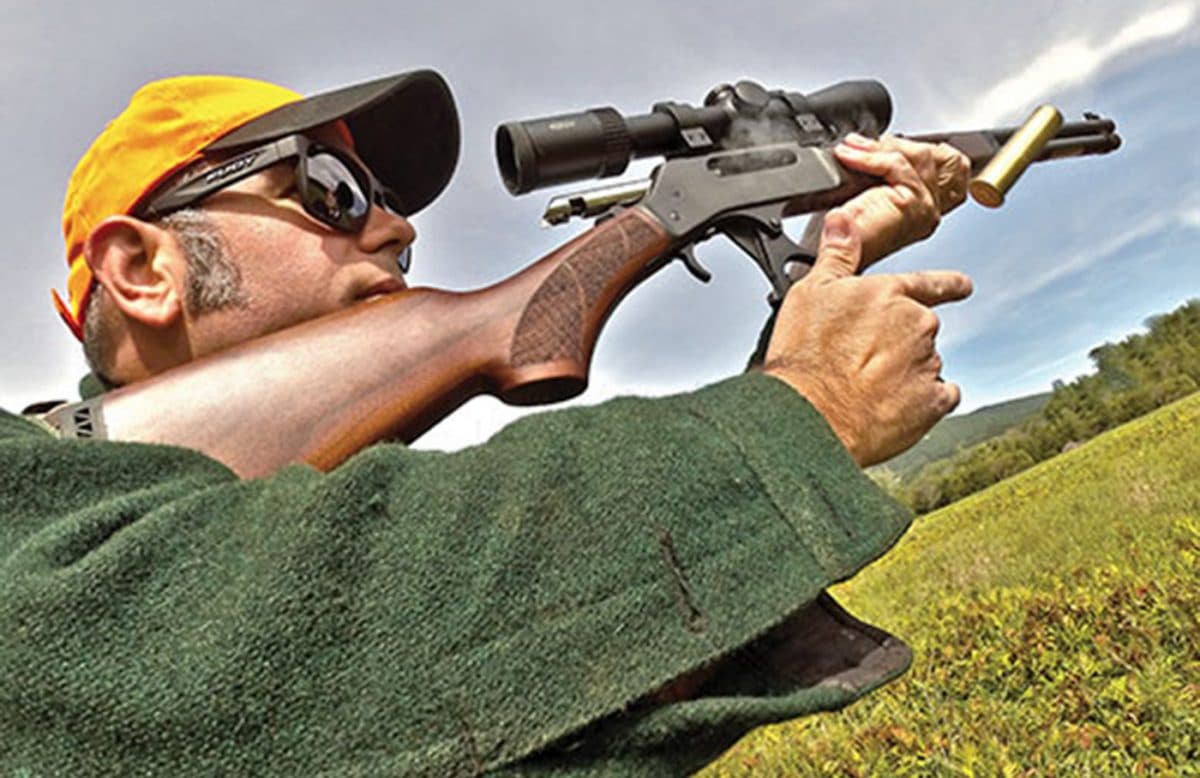 On a cool winter morning just minutes after first light, a hunter in the mountainous terrain of the Catskills begins his stalk. After several miles he comes over a hill looking down at the buck of a lifetime. He quickly raises his rifle, takes aim and unleashes a thunderous boom. Then just a few yards from where it stood lies enough meat to keep his family fed for the cold months that are to come.

The rifle was the Henry lever action, and the cartridge the .45-70 Government.

With roots dating back as far as 1860, the modern Henry Repeating Arms Company knows how to make a masterpiece, and their new rifle is no exception. Continuing with their tradition, this rifle is 100% made in America, by Americans with American made parts. In other words it was built by those who know what’s needed emerge from the woods victorious. Utilizing a best-selling design, they simply shifted their attention to another popular caliber, extending the line to suit even more needs.

As still seen today, when the military adopts a cartridge, it instantly becomes popular in the civilian market. Adopted by the U.S. Army in the 1870s, the .45-70 Government cartridge has been a popular choice among hunters. With loadings light enough to take whitetail deer without ruining meat, to cartridges powerful enough to literally drop an elephant in is tracks, this venerable cartridge fits the bill for many applications. As adopted by the Army, .45-70 Government cartridge was loaded with a .45 caliber, 405-gr. bullet (later increased to 500 grains) over 70 grains (by volume) of black powder. Hence the name “.45-70”. Today these low pressure loadings are still available for antique and authentic reproduction arms, and loads as light as 250 grains from Hornady extend the use of this cartridge to smaller game such as whitetail deer.

The Henry .45-70 lever gun ($850 in blue; $950 with straight stock, 22-inch octagonal barrel, and brass receiver, barrel band and butt plate) is simply made for traversing rough terrain. Our evaluation rifle was the blued model (H010). With an overall length of just 39” and weighing in at only 7.08 pounds, it’s a very easy gun to maneuver through thick brush, or on your shoulder for long hauls into the woods. The rifle comes with sling studs both fore and aft to make attaching your favorite sling quick and simple right out of the box. Checkering on both the forend and pistol grip provides excellent traction no matter how damp it might be outside or how sweaty your hands get during pursuit.

This rifle showcases a host of design features that help it in the hunt. For starters, I enjoyed the natural ambidexterity of the lever action, making it just as fast and fun for lefties as it is for righties. The deer didn’t enjoy the natural camouflage of the dark American walnut furniture against the deeply blued steel receiver, barrel, magazine tube and lever. The rifle simply blends into the woods and with the hunter doing his part, it makes for a stealthy shooting package up in a stand or down in a blind.

Having a magazine capacity of only four rounds makes it legal in virtually every hunting zone. All these attributes have helped the lever gun survive the test of time as one of the most popular action styles to take into the woods.

Adding your favorite optic is simple, as the receiver is drilled and tapped for an easy-to-find, inexpensive, Weaver 63b mount. After mounting a Meopta MeoStar R2 1.7-10×42 RD (www.meoptasportsoptics.com) it was ready to hunt. This particular scope was chosen because of Meopta’s legendary lenses boasting 99.8% light transmission, providing clarity when you are most likely to see game (dawn or dusk). It also features their new 4K illuminated reticle, making it effortless to pick it up against woodsy backgrounds in any lighting condition. The 1.7 to 10x magnification range provides the ideal magnification range for this versatile cartridge.

Iron lovers will find the factory sights more than adequate for hunting. The rear site has a gross range adjustment feature using common step system, with a set screw holding the rear blade for fine tuning. Although it wasn’t required out of the box, windage can be adjusted by drifting the front sight, which houses a brass bead for easy sight acquisition.

Range day proved to be exciting and entertaining. We tried two different Hornady hunting loads, as well as Black Hills 405-grain load that is designed to reproduce original trajectories and recoil. The Hornady offerings were their 325-gr. FTX and 250-gr Monoflex. Both bullets are from their LEVERevolution line and have a soft polymer tip, making them accurate as well as safe for use in tubular magazines. Our Black Hills load mimics the original loading with a flat-nose, solid lead bullet.