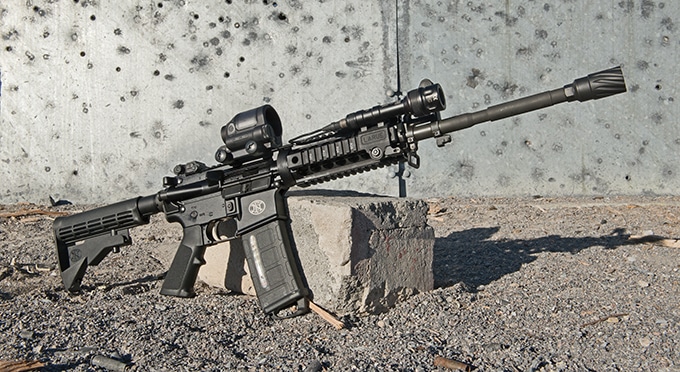 Red dots are all but standard equipment on police rifles today. For patrol use they need to be rugged, reliable, simple and proven. Trijicon remains a leader in this arena, building some of the best reflex sights and optics you can acquire. Trijicon’s SRS is a state-of-the-art reflex sight built to withstand the harshest possible use. It’s 1.75 MOA red dot is powered by a solar cell that is assisted with a AA battery (Alkaline or Lithium). Waterproof to 165 feet it is impervious to most duty conditions. It’s unique design using larger diameter lenses provides one of the least obstructed views of any similar sight. It has become my go to sight, especially for duty applications.

Accuracy testing was accomplished using a magnifying optic to make certain the tightest possible groups were shot. In this case a U. S. Optics SR-6 1.5-6 power scope with illuminated reticle ($1,250) was mounted. I’ve used this scope on several rifles, and it is very consistent when trying shoot groups. For those choosing to use a magnifying optic on their patrol rifle, it’s an excellent choice.

Tactical lights should be mandatory on patrol rifles, as identification of your threat is imperative in low-light and dark conditions. Surefire’s Scout series includes a number of sizes ranging in power from 120 to 600 lumens. Slim yet powerful, they install easily. My test light is a Sure M600V ($485 to $595) that includes both white light and infrared illumination for use with night vision. Mounted in a Larue Offset Scout mount, it sits close to the hand guard at 1:00.

An EliteIron suppressor added sound and flash suppression to the package. New this year, the Battledog ($750) is relatively short yet provides excellent sound, flash, and muzzle blast suppression. Using EliteIron’s Bravo 1 muzzle attachment device and cover makes it even better. Used alone it acts like a typical muzzle brake. Add the cover and it sends flash and blast forward and away from your partner. With the Battledog attached, the FN 15 Patrol Carbine was very quiet, and the suppressor created no adverse affects on operation. Possibly one of the most solidly built suppressors recently tested it, has clean lines, stainless steel construction, and weighs in at 16 ounces. I’ve used it on several test rifles, and it is one of the best for use on 5.56mm rifles. Machine gun rated, it has been used with great effect on my M16 selective-fire weapons. 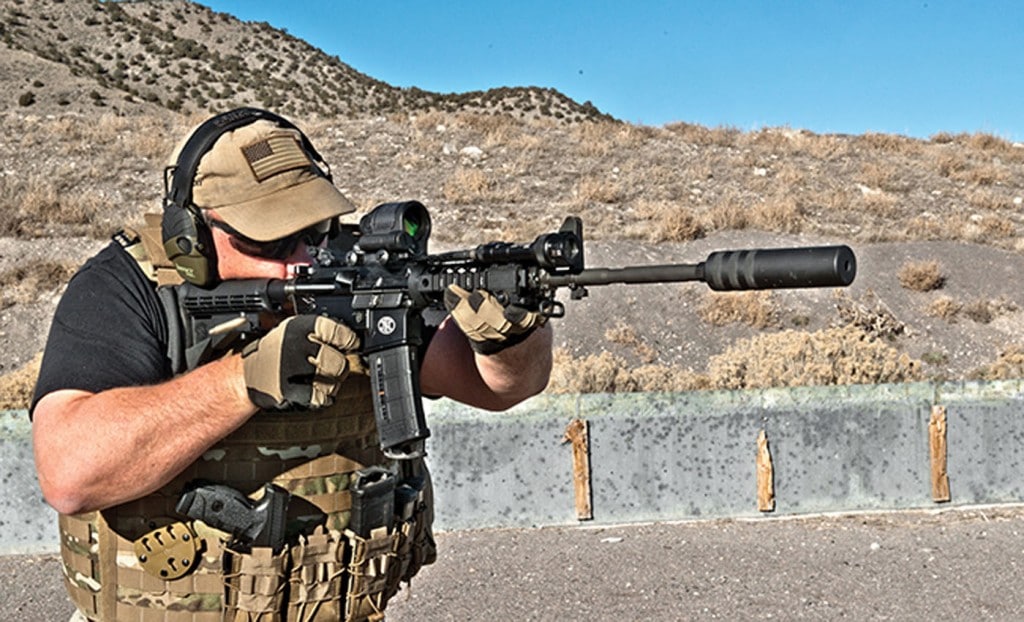 Testing at CQB distances this rifle was 100% reliable. Initial testing with the standard A2 flash hider was just like any standard AR-15 rifle. Flash suppression is solid, muzzle blast is still present but not debilitating with no recoil control. Mounting the Bravo 1 muzzle brake changed things quite a bit. Louder for sure, muzzle blast was then 360 degrees, with a bit of muzzle control. Installing the muzzle cap was a huge improvement. No recoil control but all the blast is sent forward. None of these attachments altered brass ejection or had any effect on the rifle’s operation. Adding the Battledog Suppressor resulted in a noticeable recoil reduction, flash suppression and elimination of muzzle blast. It visibly altered brass ejection from a very consistent 4 o’clock to an equally consistent 2 o’clock position. Bolt speed was clearly altered but reliability was never compromised, even during very fast strings of fire.