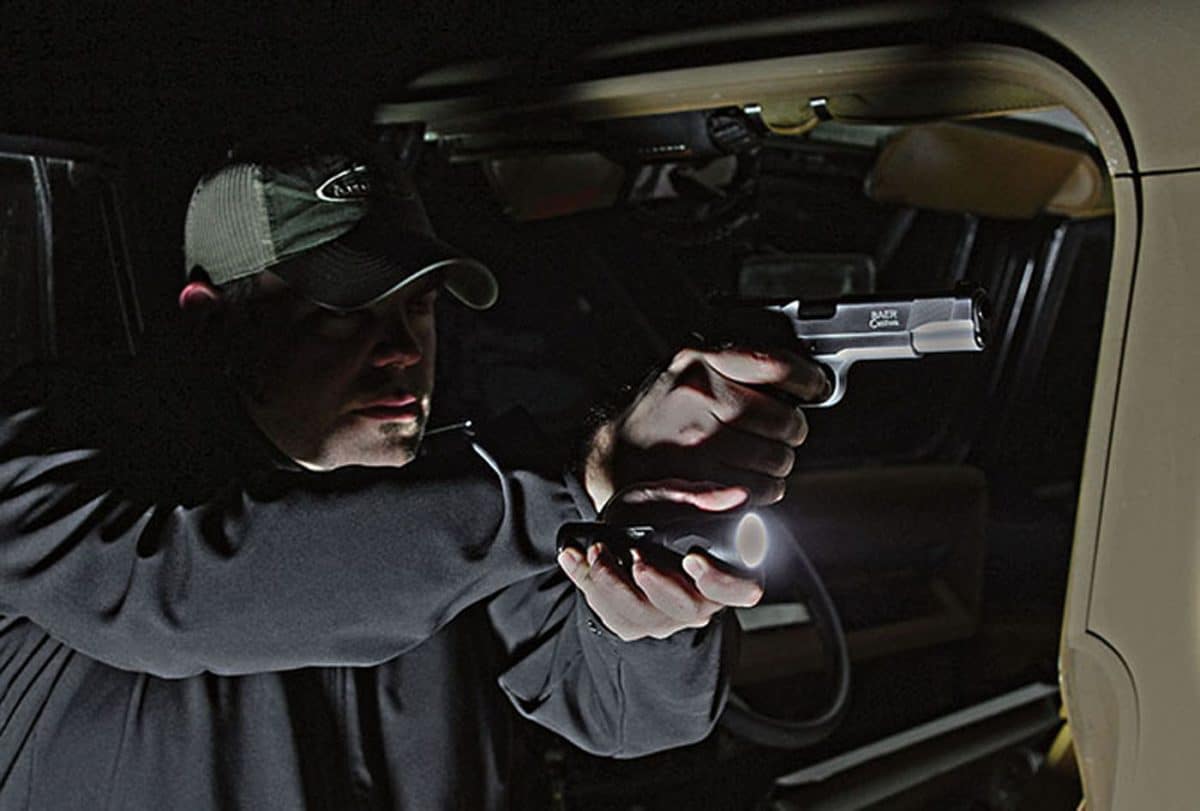 Muscle cars are one of Les Baer’s two primary hobbies, and he has a substantial collection of them. His other hobby, fine firearms, is where he has long made his living. Les Baer Custom is one of the top tier 1911 custom-build houses. “Each pistol is hand-built one at a time, and we ain’t gonna change that,” he told me in an interview for this article. The guns have no MIM parts. Les has determined that it takes 43 man hours per gun to turn out this issue’s test pistol, a variation of the popular Premier II dubbed the Hemi 572.

Muscle cars like the 1970 Plymouth Barracuda Hemi 572 Les named his latest pistol after generally have two things going for them: distinctive appearance, and heavy duty components. The Hemi 572 pistol continues both traditions. Dark DuPont S finish highlights what Les calls the “appointments”: ambidextrous thumb safety, hammer, trigger and magazine release button. These create a stark visual effect against the silvery hard chrome finish of the rest of the pistol, a finish not only for looks but for serious wear, with a surface hardness of Rockwell 89. VZ grips, the black Recon style, not only “fit the look” but their rough surface guarantees hand traction in mud, blood or flood. This is augmented with checkering on the mainspring housing, done to a solid-holding 20 lines per inch, and a little finer on the front-strap of the frame, presumably for user-friendliness.

Sights are adjustable, made in-house by Les Baer and offering homage to the redoubtable BoMar. Up front is a fiber optic. I suspect Les continues to keep his finger on the pulse of his buyers, as he has since I’ve known him. I say that because the fiber optic came in green, and the general consensus of serious shooters I’ve discussed it with is that green is their preferred color for visibility when doing fast, accurate shooting in varying light conditions.

Baer offers the Hemi with a promise of 3-inch group capability at 50 yards. According to Les, his shop makes the whole pistol, except for the grips and the Wolff springs they’ve used with great satisfaction since 1976.

The first thing our test team noticed, to a man (and woman), was that while the thumb safety wiped down into the “fire” position with just the right amount of resistance, pushing it back up to “on safe” was a chore. Most had to use the other hand to “on-safe,” and all had to at least shift the gun in the hand to get enough leverage to do so one-handed, particularly when operating the ambi safety southpaw. I hadn’t seen that before, so I called Les and asked him about it, and got a surprising answer.

“We make them now with a stiff safety on purpose,” he told me, “because people were bitching about us setting it too light and they were worried about knocking it on with their thumb while shooting.” He added that it could be made lighter at the customer’s request. Since my own feeling is that if your 1911’s safety starts going on by itself you need either a gunsmith or an exorcist, I’d make that request. It’s the sort of thing that boutique makers like Les Baer handle routinely for their clientele. (On this pistol, the thumb lever on the right is smaller than the one on the left, to reduce the likelihood of the lever being accidentally pushed down in the holster during routine carry by a mostly right-handed clientele.)

The rear sight on our test sample had been mounted slightly left of center, requiring extreme adjustment to get on target. Trigger pull was very consistent, with only about 2.5 ounces variation between lightest weight and heaviest, averaging 4 pounds, 6.54 ounces on a Lyman digital gauge. This is certainly within “common custom and practice” safe-pull weight specification for a 1911 pistol used for “serious business.” (It’s also NRA-legal for Distinguished competition, a/k/a “hardball” matches.)

As is typical with the Baer guns, “hard-fitted” for accuracy, it took a lot of force to “break battery” and retract the slide. Baer’s pistols have historically taken a few hundred rounds to “break in” in this respect. They should be broken in before carry, like any pistol, and particularly in this case should it become necessary to perform an emergency manipulation with injured/weakened hands or arms.

Les doesn’t care for full-length recoil-spring guide rods on 1911s. His exact quote is, “I hate the damn things!” Given his long history of building super-accurate, super-reliable 1911s with the standard John Moses Browning recoil spring system, he’s hard to argue with. I don’t try, if only because I agree with him. The pistol has forward slide serrations; I have no use for them, but they don’t get in my way either, so I’m neutral on that. The magazine well is lightly beveled on the Hemi, and I’d like something wider, being old and clumsy, but we’re treading close to subjectivity here, so let’s go to something that can be more objectively analyzed.