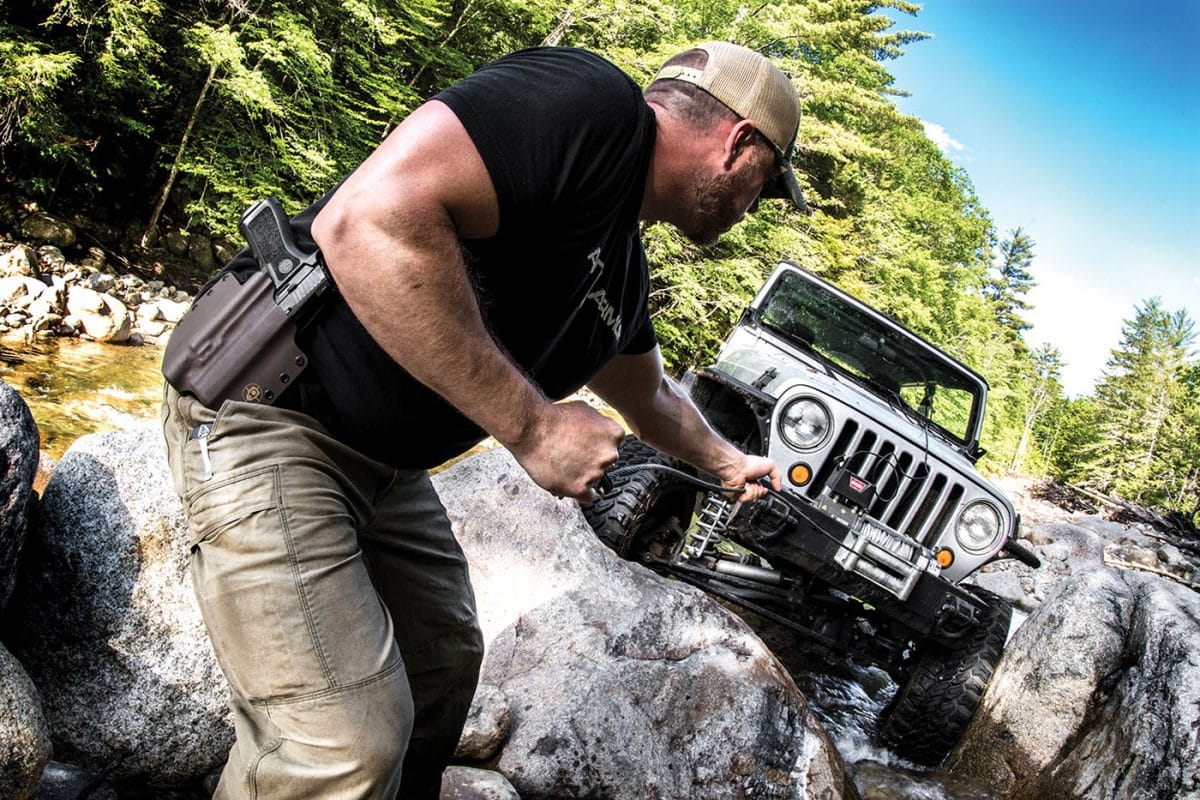 As I push 50 I am beginning to appreciate these sorts of sights more and more. For those who want to add a red dot on their EDC, the X-Carry slide also has a cut out and plate just ahead of the rear sight for a Romeo-1 optic, the Sig version of an RMR. The pistol comes in the usual padded hard case with two 17-round magazines and instructions. The X-Carry does not come with a holster as the stock P320 does. An additional point worth noting is that due to different floor plates the X-Carry magazines are not compatible with a standard Carry or Full-sized P320 frame. Just change them out with standard floor plates and you are back in business for standard use.

Which brings us to the final major difference between the X-Carry and your average P320—the flat faced trigger. Given the X-Carry’s pedigree and proliferation of flat faced triggers on many popular pistols and rifles out there, particularly Glocks, M&Ps and AR-15s, this does not seem at all unusual. I personally own more than one Overwatch TAC trigger for my favorite Glocks, and flat-faced Geiselle triggers along with other models for some of my well-used AR15s. On those platforms, in those configurations, flat-faced triggers work great and I can recommend them without hesitation. On the Sig X-Carry however, for me it was slightly less enthralling. I had previous experience with the Apex Tactical flat advanced trigger for the standard first generation P320 series, and while it certainly wasn’t bad, it turned out I just liked the curved one better. That happened to be the case here as well. The trigger on my X-Carry broke cleanly at an average of just under five pounds, depending on where I placed the trigger gauge. Take-up was minimal, as was over-travel. It felt a tiny bit gritty, as if there is almost another stage. Still, it’s a good trigger, and at current pull weight almost ideal for concealed carry, but for me tended to shoot low unless I really concentrated. I prefer something nearer 4-4.5 lbs. on my carry gun triggers, so that could have been a factor, or I need to work more on my trigger press. All that said, my research shows that others folks out there really like the flat-face and pull weight on the Sig X-Carry trigger, so this personal data point should be taken with a grain of salt.

If it turns out you also prefer the curved trigger, swap the flat one out with a standard P320 version and push merrily on. Regardless, my groups and scores with the X-Carry averaged in the 2.5 inch range, and I had to work for them. Most loads grouped typically low and right, often with a called flyer opening up otherwise decent groups shooting from a bench at 25 yards. I noticed about midway through testing that the front sight was ever so slightly to the left, which may explain the tendency to shoot right. Top honors went to the Hornady 147-gr. XTP loading at a group size of 1.75”, strung vertically just right of center. Other ammo utilized was Federal 115-gr. JHP HI-Shok, Tula 115-gr. ball, Sig 124-gr. V-Crown JHP, and some nickel cased Freedom Munitions 147-gr. HP reman. While slightly wider and a bit longer at the tail than a P320 Compact or Carry, it still was plenty concealable with your typical concealed-carry clothing. Various drills from concealment at typical engagement ranges demonstrated that the X-Carry could do its job in the intended role, and then some.

Mags dropped free as if launched, and locked in place upon loading very positively. Reliability was perfect, which is not surprising given how other P320s typically perform.

For those who are looking for an EDC pistol that comes with high quality sights, will accept a red dot, a beavertail, and otherwise has everything else you need straight from the box, the X-Carry could be for you. This especially true if you already like or own P320s and associated gear. The X-Carry stays with the Sig tradition of accuracy, reliability and modularity we have come to expect with the P320 line. While not the most concealable pistol out there, it still meets those requirements, and is ready for IDPA SSP or ESP division competition if that is your cup of tea. Right now they are available only in 9mm, but I would bet that will change in the future. MSRP is around $862, which is a deal considering what you get. See it at your gun shop, or contact SIG SAUER, Dept. OT; Tel.: (603) 610-3000; Web: sigsauer.com