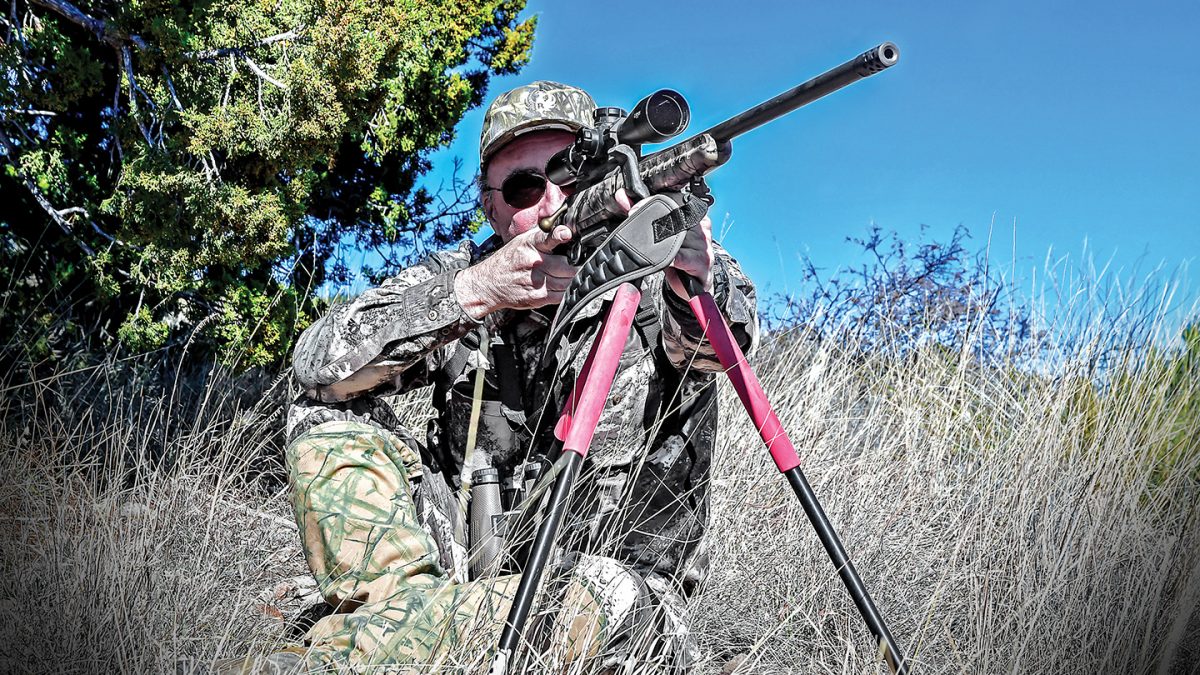 Tested in the field and at the range, a much-enhanced version of Ruger’s popular American rifle performed spectacularly.

The thousand-yard stalk would be a tricky one. My quarry, a big-bodied, 3X3 West Texas desert mule deer, was bedded with five does near the top of a hill covered sparsely in long grass and scattered cedars. The first 500 yards were safe enough—if you consider maneuvering through a Catclaw-choked ravine safe—but that cover eventually ran out, as did most of the cedars. Although we worked to within 125 yards of the buck, he might as well have been on the moon. The does were already looking suspiciously in our direction, and there was no way to move around the last pair of cedars, find the buck in the tall grass and get on him before he bolted.

It was a stalemate, and the buck was holding all the cards. Then my guide, Steve Jones of Backcountry Hunts, fished an ace from his pocket in the form of a small fawn bleat call, and blew on it while we tucked in beneath a cedar. Three does we hadn’t even seen jumped up and came running, angered that something was trying to eat junior.  The other five does followed, trailed by the buck, and one by one they crossed a small opening between the cedars to our front, snorting and stomping the ground. But the buck was a wise one. He let all the does go first, and remained hidden until all the does crossed, with only his nose showing. It seemed an eternity before he stepped out, giving me one fleeting chance to touch off a 6.5 Creedmoor round and send a 143-grain ELD-X bullet into his vitals.

He dropped at the shot, and I let out a very long-held breath. It was one of the wildest endings to a deer hunt I’ve ever experienced, and that was entirely appropriate, for I was hunting some truly remote and wild country with the Ruger American Go Wild rifle, a much-enhanced version of the popular, economically priced Ruger American bolt-action rifle.

It’s obvious at a glance that the Go Wild rifle is quite different from the standard Ruger American. For starters, the synthetic stock has, as its name implies, an attractive and effective Go Wild I-M Brush pattern camo finish. This is complemented nicely by a bronze Cerakote protective finish on the action and barrel, which is threaded (5/8-24) and topped with a 360-degree radial muzzle brake. Notably, the rifle comes with an AI-style detachable, three-round magazine versus the rotary polymer magazine used on other Ruger American models. I like the change, for the new magazines have some positive attributes, including being easier to load.

There are some tradeoffs, to be certain, with rifles in this price category, especially when compared to flagship models like the Ruger Hawkeye, which costs nearly $400 more. The process for adjusting the trigger, for example, is a bit awkward, requiring removal of the magazine latch to access the rear action screw. The Ruger American rifles have, however, arguably become the most popular of the value-priced bolt-action hunting rifles, and with good reason. The guns tend to be superbly accurate.