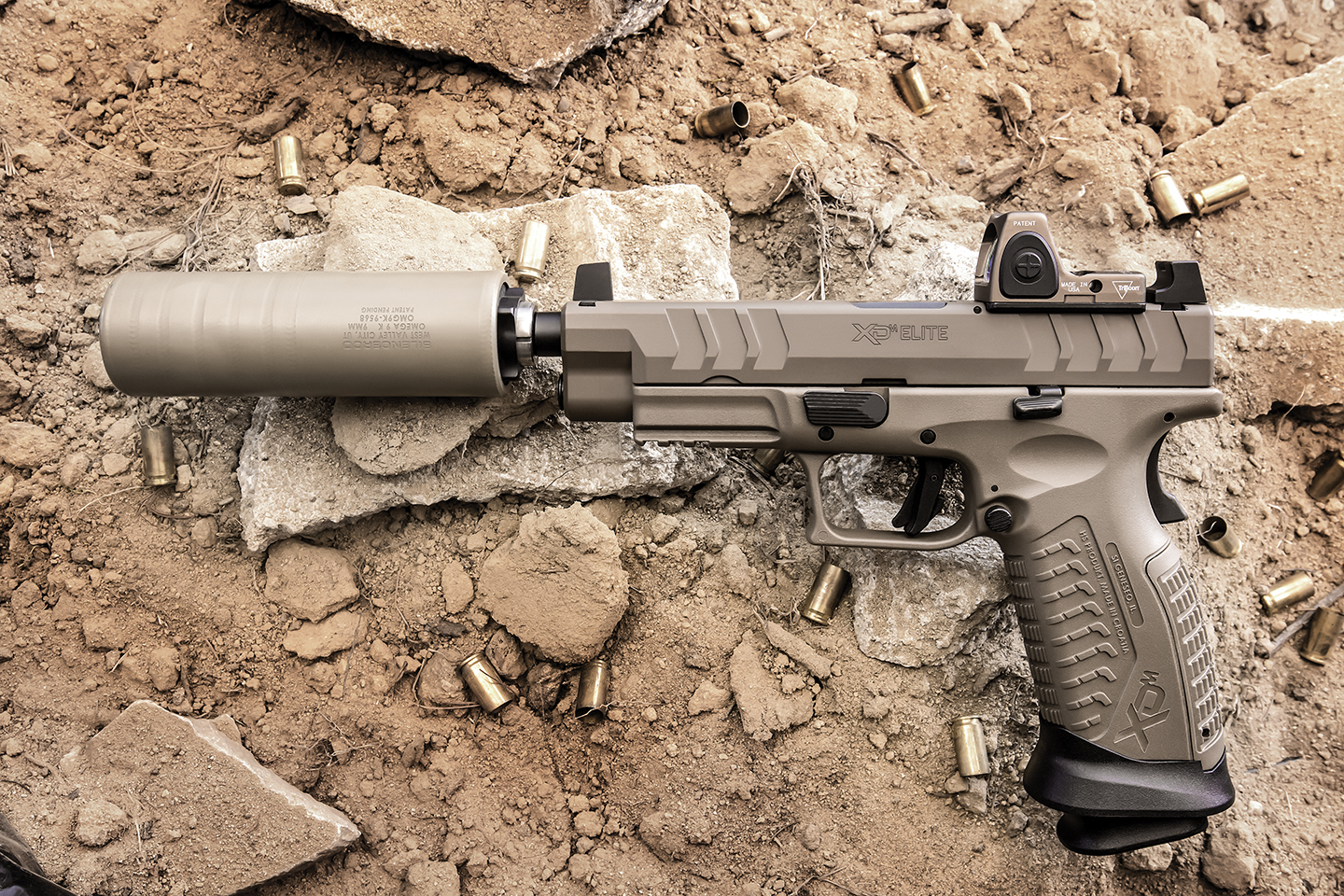 Having tested Springfield Armory XD pistols since their introduction in 2002, I’ve found them to be among the most comfortable-shooting pistols on the market today, commanding a very strong following among owners. Several officers purchased their own, 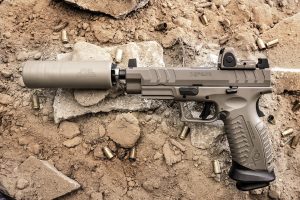 carrying them as duty pistols when I was the department armorer. They were accurate, reliable, and—aside from some magazine issues very early on—served well. With the introduction of the XD-M (Match) version in 2008 they only increased in popularity. Often seen at local action-pistol matches, they continued their popularity as model choices grew. As time passed several models have been added, including those accepting red-dot sights and suppressors. Testing the Elite OSP using a Vortex red-dot sight and Liberty suppressor it was accurate, reliable and truly a blast to shoot. With the introduction of the XD-M Elite series, Springfield Armory has brought it all together. High-capacity, optics and suppressor ready, and with the META trigger it is the culmination of years of development and customer input.

Like most long-in-the-tooth shooters (especially those with a police background) red-dot sights have been a slow burn. Over time that has changed and I have become a pretty strong advocate of them. Maybe it’s experience, or maybe age and a failing ability to get anything that resembles “focus” on a front sight. Up close there is not much of an advantage for me, but at distance a red-dot sight is night and day, making it a regular feature on any pistol I carry consistently. Arguments still rage, just like they did for red-dots on rifles, but the battle is about over. Regularly seen in competition and duty, even the military has adopted them for certain applications. Red-dots are here to stay.

Threaded pistol barrels for suppressors are still warming on me. Some suppressors are pretty short and you can at least fantasize about practical application. For the most part,

they are just flat out fun, especially on rimfire pistols. Zero recoil, incredibly quiet and easy to shoot, they smack of fun on the range. Attaching a suppressor to your .22 LR pistol is the epitome of fun plinking on the range. Move to center fire and they still have their advantages. Great for people who are sensitive to muzzle blast, they tend to tame recoil a bit as well. I have also used them to great effect hunting hogs with a handgun, especially with a red-dot sight, or even better, night vision and infrared light. Not much for concealment, they have their place in the tactical world, but remain pretty rare in real world applications. Pistols that accommodate both a red-dot sight and suppressor are starting to pop up, and Springfield Armory’s XDM-Elite OSP is one fine example.

The new XD-M Elite pistols are built around Springfield Armory’s META (Match Enhanced Trigger Assembly) trigger, one of the smoothest factory triggers out there on a polymer-framed, striker-fired pistol. A flat face provides control and speed, while the integral overtravel stop provides precision. Reset is short and it has proven reliable and predictable.

Capacity with the removable magwell is a healthy 22 +1 rounds of 9mm. Remove the magwell and you still have 20+1 rounds. Ergonomics have been improved for a solid grip and comfortable feel over long range sessions. Controls are improved, with an ambidextrous slide stop to match the ambi magazine release.

Enhanced slide serrations are cut on a slide that contains a match-grade, hammer-forged

barrel with loaded chamber indicator. Although fitted with a 4.5-inch slide, this model includes a threaded (1/2 x 28) 5.28-inch barrel to accept suppressors or other muzzle devices. Capping the barrel is a nicely matched thread protector with grooves for access with gloved hands or in inclement weather. Optics ready, the Elite OSP includes plates for popular red-dot sights, including the Trijicon RMR used for testing. The drift-adjustable rear sight is black with serrations, and suppressor height to co-witness with the red-dot sight of your choice. The font sight is a red fiber-optic. Coated in a Flat Dark Earth finish, it ships with two 22-round magazines in a useful padded nylon carry case.

Every XD-M tested has been soft shooting for its respective caliber, and the Elite is no exception. Part of that is the fact this is a full-sized pistol, but its dual recoil springs are some of the best out there. My large hands enjoy full-sized pistols and it allows for some pretty impressive accuracy all around. My best group from 25 yards was four rounds clustered, with one ringer, that still measured just over 1.5 inches firing Federal’s 147-gr. HST. The same was true for most everything tested, but it seemed to shine with the Federals. This round is always accurate, but more often than not, the +P rounds tend to win out in the long run; not with this pistol, even at 50 yards. With the RMR zeroed at 50 yards it put ten rounds into a group the size of my fist, around 4.5 inches. Not bad using the hood of my truck and a bag for a rest. Even at 100 yards it was still accurate, although Doubletap’s 115 +P loaded with the Barnes TAC-XP bullet was a tad tighter at this distance; it’s a screamer, making just under 1,300 f.p.s. out of this 5.28-inch barrel.

I’ve never had reliability issues with any XD-M. I put a tad over 700 rounds through this one over two days and it never missed a beat unsuppressed.

Shooting suppressed, center-fire pistols can be an adventure. Some suppressors seem to have fewer issues, but I’ve never had a pistol/suppressor combination that ran everything. That being said, the Dead Air Wolfman used during testing is one of the best to date. Most shooters have a load they prefer, and in this case it was those with  heavier bullets. It ran the 147-grain HST without a hitch, as well as the 135-grain Hornady +P Critical Duty. All of the 124-grain loads ran like crazy—the only ones that would not run all the time were my 115-grain competition loads. Pretty anemic by design, they ran fine unsuppressed, but just didn’t have enough juice with the suppressor.

Mounting the Trijicon RMR Type 2 is pretty straight forward. Like everything with this RDS, you will need the Trijicon mounting kit that includes the thin metal plate and the properly sized screws, otherwise they are just too long and will not mount the RMR securely. Using this kit and thread locker on the screws they just don’t shoot loose.

I suppose you could carry this pistol, as people carry all kinds of stuff, but that’s not its strong point. Having carried full-sized, all-steel pistols for years, I get it and know the drill, but this is a big pistol. It’s fast, accurate and designed for use in a tactical or competition rig. Throw on a light and RDS and it fits nicely in a thigh rig, even with a suppressor in the correct holster. Without the RDS the sights work fine, but they are tall. If you want dots or glow in the dark you will need to change them. It works great with the taller sights and no RDS but some prefer normal height sights, and they can be easily changed. This pistol out of the box is really set up for adding an RDS and/or suppressor and handles both really well.

This is really the “bigger is better” pistol for those looking to use an RDS, suppressor, compensator, light or all of the above together. You can pick and choose, but it will accommodate them all with 23 rounds online.

Springfield Armory is one of the best companies for providing what their customer base
wants. With so many companies ignoring their base and building at the whim of social media and the loudest guru, Springfield’s approach is kind of refreshing. If you are an XD-M fan looking for an RDS-equipped pistol that does it all you will absolutely love the Elite. Give it a try, it just may surprise you how much fun this pistol really is to shoot! See it at your gun shop, or contact Springfield Armory; Tel.: (800) 680-6866; Web: www.springfield-armory.com 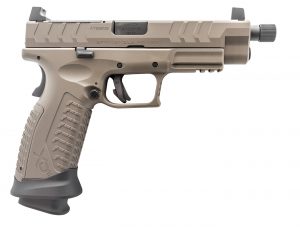 Groups fired from bag rest on the hood of my truck at a range of 25 yards. Three 5-shot groups for comparison. Velocity in feet per second measured with a Chrony chronograph.