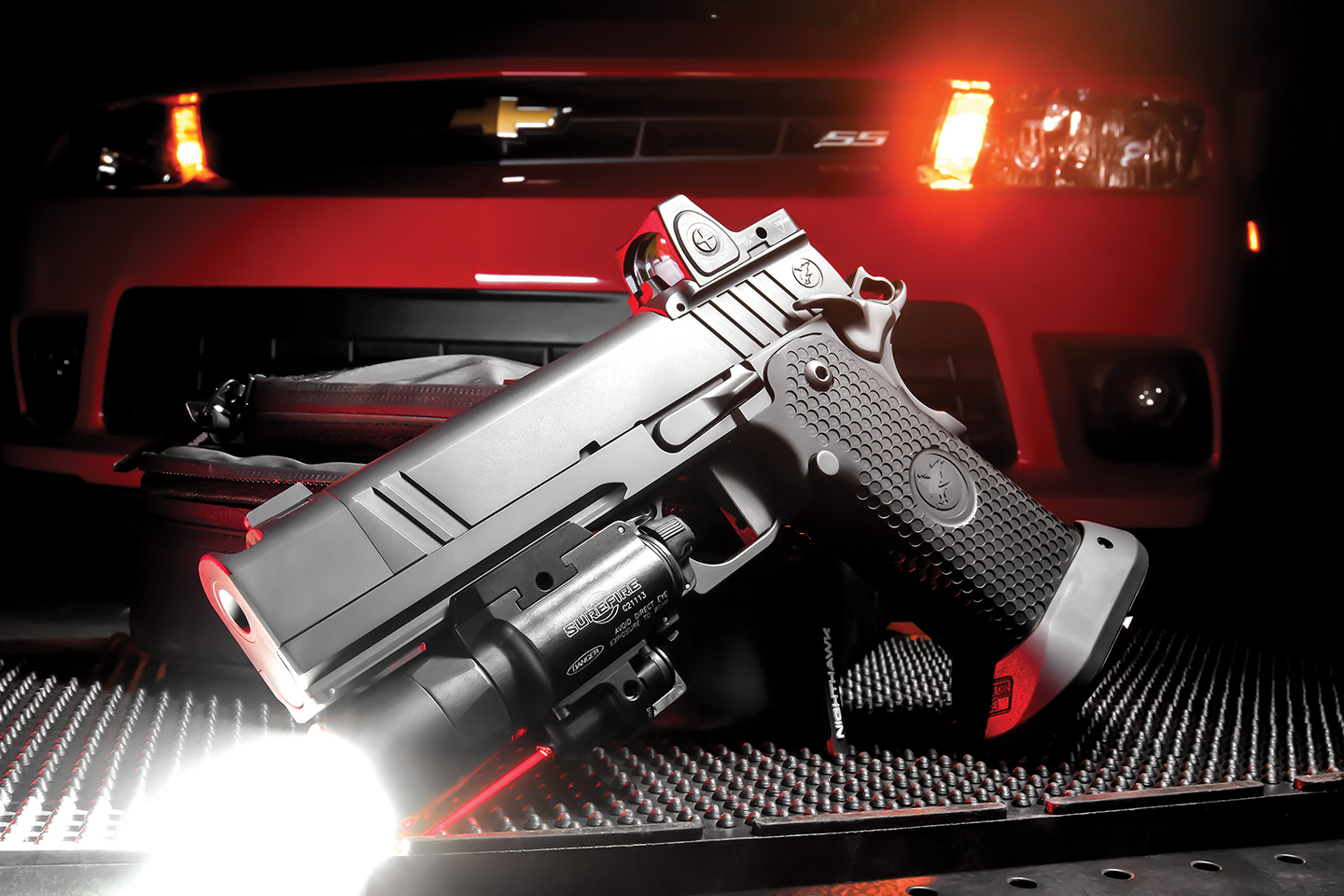 The Need For Speed 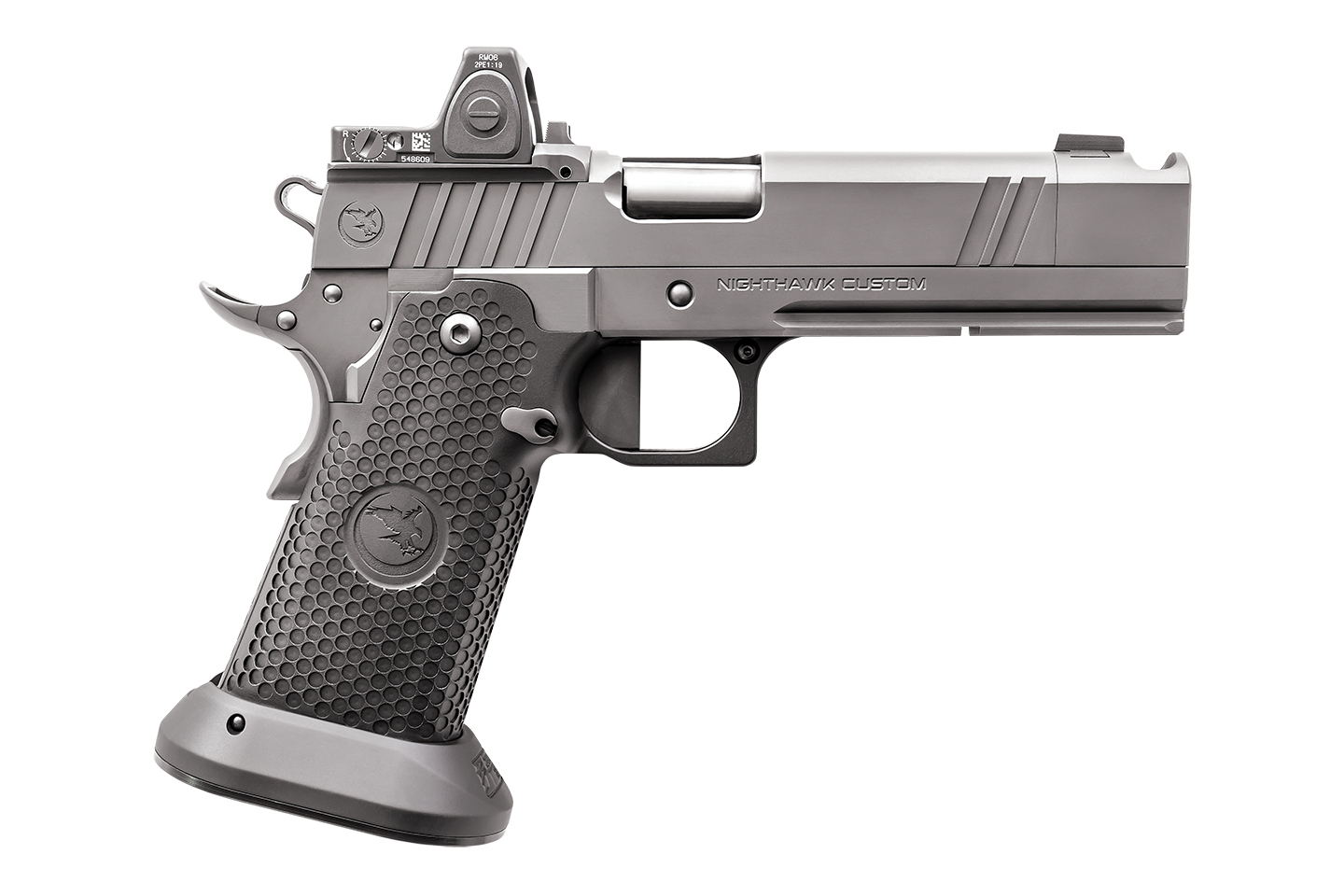 I’ve been fortunate to shoot a wide variety of Nighthawk pistols over the years ranging from prototypes to production guns. Like a fine wristwatch, there is no mistaking the quality the moment it’s in hand. The TRS Comp is simply awe-inspiring, and I don’t freely give such a compliment without substantial reasoning.

The TRS Comp might just be the best combination of show-and-go performance that I have ever fired. The fit, finish, and craftsmanship are second to none, and the features integrated into the pistol are both practical and display-worthy. Straight out of the box, the slide quite literally feels like it rides on ball bearings. The slide-to-frame fitment is scary perfect, as is the seamless integration of the effective compensator.

The TRS Comp is deceptive in its dimensions. At a glance, the pistol appears no longer than a standard Government model 1911. In fact, it does feature a full-length 5-inch match-grade barrel that has been paired with an integral single-port compensator. The business end of the compensator has been crowned and, like the slide, flawlessly fit to the end of the slightly extended rail of the frame’s dust cover. Sitting atop the comp is a standard-height Tritium night sight that has been seamlessly blended to the rounded contours of the compensator and top of the slide.

The slide features conservative-looking yet deep slide serrations that nicely accent the pistol while still being extremely functional. A precision-machined optic plate with an integrated rear sight appears to be one with the slide but is removable. Our test pistol came with Trijicon’s excellent RMR Type 2 RM06 featuring a 3.25 MOA adjustable-intensity red dot sight. The optic sits extremely low in the slide — so low that standard-height sights are utilized in place of taller suppressor height sights, adding to the slick lines of the pistol.

The frame features a full-length recon rail dust cover that provides just the right amount of weight to the front end to perfect the pistol’s balance. Combined with the effectiveness of the comp, any semblance of muzzle flip is nearly nullified — more on that key attribute in a minute.

The double-stack frame accepts 17-round flush-fitting magazines produced by Staccato but tuned by Nighthawk Custom. A pair arrives with this pistol. These magazines are fed into the frame by way of a simply enormous Dawson Precision flared magazine well; even Ray Charles could slam reloads home with the best of ‘em. Just like every other feature of the TRS Comp, this magwell has been precision-fitted to the frame and integrates well with the slim, wrap-around grip panels.

Circular dimpling texturing on the grip frame is non-abrasive yet highly effective in setting and maintaining your grip. I have extra-large hands and the grip panels, the relief cut beneath the squared-off trigger guard, and the magazine well set my grip like few pistols ever have. My hand is perfectly aligned to hit and maintain pressure on the extended memory bump grip safety while my thumb lines up just right with the left-side only extended thumb safety.

The flat-faced, serrated trigger provides consistent leverage and control regardless of where your finger lands on the shoe and provides a clean, crisp trigger pull measuring a hair over three pounds. The magazine release is extended and rounded, while the slide stop has a melted appearance.

The entire pistol has been finished in a flawless black DLC (Diamond-Like Carbon) coating, contributing to its mysterious appearance. On the one hand, the TRS Comp looks, feels, and performs like a modern-day assaulter’s pistol, while at the same time, possesses this sort of highly-refined, heirloom-like air about it that begs to be stashed away and shown only to a select few in secret. At the end of the day, I think the pistol is both.

As to the function of the TRS Comp, the compensator very effectively turns this pistol into a flat-shooting 9mm bullet hose. And the rest of the workmanship makes it a very accurate bullet hose. In short order, I felt as though I could will rounds onto target just as fast as I wanted to pull the trigger — the bullets simply go where you want them to, in tight little clusters without effort. The weight and balance must be felt in order to fully comprehend what I’m saying. The pistol recoils like a pellet gun. The red dot does a little jig on your point of aim under fire, never dancing outside the lines of the lens — even when shooting hot +P defensive loads. The Nighthawk ate everything up and neatly spit it out without disturbing the shooter one iota.

The TRS Comp is an overachiever, one that strives to make its owner look like a seasoned champion. As one might expect, the pistol delivers on 25-yard accuracy, rewarding its shooter with flattering levels of performance. Some pistols require you to work pretty darn hard to unlock their accuracy potential — this one does all the work for you while discreetly covering up any sloppiness or errors when the shooter slips up. The best groups came from SIG Sauer’s 124-grain JHP V-Crown load, neatly stacking five rounds into a tight 0.70-inch group at 25 yards.

I like this pistol. I like it very much. But, as I said, if you’ve got the need for speed, it’s going to cost you money. In this case, a buck less than five stacks to go TRS fast. In my book, the attention to detail, high functionality, and sheer shootability make it worth saving for (or splurging on). This package brings rifle-like capability to the waistband of your pants, as well as capacity with some 170mm mag extensions. You’ll need to plus size up your t-shirt just to hide the massive magazine well, but the capability the TRS Comp brings to the table would make it a hard-to-resist companion if forced to visit the other side of the tracks … or if you felt the need to dominate the field of carry optics in style. See the TRS Comp at your nearest Nighthawk dealer, or for more information, contact Nighthawk Custom; Tel.: (870) 423-4867; E-mail: [email protected]; Web: www. nighthawkcustom.com