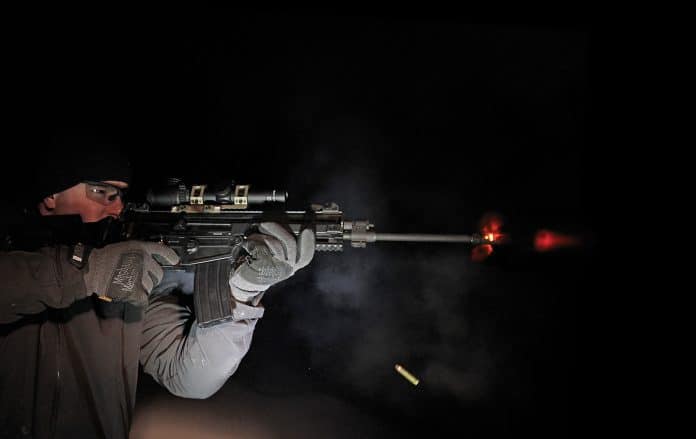 If you’re one of those people for whom a mere AR is not good enough, there are options out there. In the past decade or so we have seen AR alternatives, including the Robinson XCR, Bushmaster ACR and SCAR-16, to name a few. Now, the Czech Republic has something new, or new to us at least: the .223/5.56 NATO CZ Bren 805 S1 ($1,999), a semi-auto export version of the current-issue Czech Army assault rifle. The Czechs know a thing or two about producing small arms, having had a robust small-arms manufacturing base since before WW II.

A casual look at the Bren 805 will clearly demonstrate its biggest influence was the FN SCAR-16. While not an exact clone, the resemblance is unmistakable. As the proud owner of a SCAR-17, I have come to the conclusion that it is arguably the finest battle rifle in the world, so any rifle modeled on the SCAR cannot be a bad thing. While the appearance is more than skin deep, there are some significant differences that set the Bren 805 S1 apart. That being so, it may be useful to separate general discussion of the Bren 805 into the categories of “like a SCAR” and “not like a SCAR”.

In the “like a SCAR category,” the Bren has a synthetic lower and trigger housing group, topped with a high-grade aluminum upper receiver housing a 16.2”, 1:7 twist pencil barrel. These can be broken into their respective parts via capture pins in a fashion similar to the SCAR. The upper sports Picatinny rails along the top and below forward of the magazine well, along with options for adding rails on the sides. As with the SCAR, the Bren 805 S1 is short-stroke gas piston operated with a reciprocating charging handle that can be easily switched to the opposite side. The charging handle can be used as a forward assist, and care must be taken to keep the support hand thumb far enough forward so as to not let it get hit during firing.

The 3-position adjustable gas valve is also exposed forward of the hand guard. It comes with high-quality steel BUIS similar to those on the Sig 716, as well as integrated sling attachment points high on the fore and aft portions of the upper. It ships with one 30-round aluminum magazine.

In the “not like a SCAR” category, the CZ weighs in at about eight pounds, or 3/4 of a pound heavier than the SCAR-16. It feels stout, without being unwieldy. The synthetic grip looks like a futuristic version of a Tango Down BG-17 model, but it’s not interchangeable as its molded into the trigger housing. It is however quite comfortable. The synthetic stock folds to the right of the receiver, bringing the OAL down from 39 to 28.5 inches. It also articulates like a SCAR, but is thinner and somewhat skeletonized, with a cheek riser similar to that on some bolt rifles. The stock released easily, locked up tight and felt solid, though adjusting the cheek riser forward took a bit of work. Third, though the controls were similar to a SCAR, there were notable differences. The safety was ambidextrous and flanged to make it easy to reach, while the magazine release was also ambidextrous. The bolt hold open is just that, as it will not release the bolt like the SCAR or an AR. To do that, you must use the charging handle. The CZ’s two-stage trigger is significantly better than a stock SCAR trigger, feeling more like a very refined AK or revolver.

Shooting the Bren 805 S was interesting, and the word that best describes it is “smooth”. Recoil impulse and muzzle rise were minimal, with follow up shots very fast. This is due to the combination of its weight, operating system, trigger, and very effective two-port muzzle brake which is more effective than the PWS version on the SCAR.  Unfortunately, the Bren 805 was not capable of tack-driving accuracy, at least in my hands.

I topped it with a Leatherwood 1-4x CMR 2024 scope. Maybe the marginal accuracy can be attributed to the low–power magnification, the pencil barrel,  and/or more likely to me. My best group of about 1.5 MOA was fired at 200 yards with Freedom Munitions 5.56 55-g.r ammo. Practical accuracy was fine, as I was able to hold “minute of man” fairly easily, hitting a pepper popper with 5 of 5 on center firing rapidly at the same range. This, and the fact the Bren 805 fed everything without a single problem from five different types of synthetic and metal AR mags is far more important to me than getting holes to touch. Contact CZ USA, Dept. OT; Tel.: (800) 955-4486; Web: www.cz-usa.com