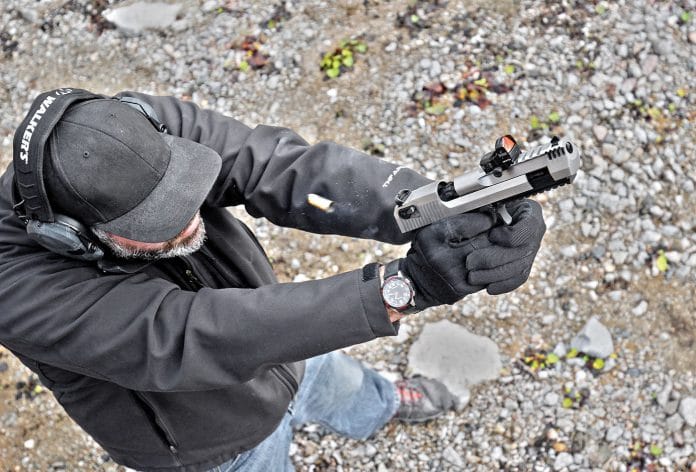 Despite popular myth that the .50 AE (“Action Express”) cartridge was developed by the Israeli Special Forces, it was, in fact, developed by Evan Whildin of Action Arms in 1988. The .50 AE cartridge looks a lot like the .500 S&W Magnum, albeit with a 3/8” shorter, slightly tapered case with a rebated rim. Both shoot .500 diameter bullets. The Magnum Research Desert Eagle pistol was the first firearm ever chambered for the .50 AE, and the cartridge remains a mainstay of the Desert Eagle product line.

The newest member of the Desert Eagle family is the Mark XIX .50 AE L6 ($2,054). The “L” stands for “lightweight”. Lightweight in relative terms, however. Tipping the scales at a “mere” 55 oz. empty with magazine, this aluminum-framed version is a full pound (16.2 oz.) lighter than its steel-framed siblings. In addition to the 8-slot Picatinny top rail common to all .50 AE Desert Eagles, the L6 has a 10-slot Picatinny bottom rail machined out of the frame. With the exception of the hard-coat black anodized aluminum frame, 10-slot bottom rail and stainless steel barrel and slide, it looks and functions just like an other .50 AE Desert Eagle. 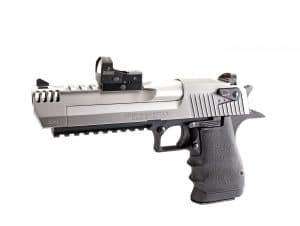 The L6 employs the standard Desert Eagle single-action-only gas operating system, wherein the barrel is fixed to the frame and does not move during cycling. A 3-lug bolt that looks somewhat like that of an AR-15 rotates to unlock the action when the gun is fired and cycles to the rear inside the massive slide. The barrel is rifled in a six-grove polygonal pattern at a RH twist rate of 1:19”, and has an integral 8-port muzzle brake (four ports on each side). Fixed, combat-style sights are dovetailed into the top of the barrel and slide.

Controls consist of the aforementioned SAO trigger, spurred external hammer, left-side mounted magazine and slide releases, large, ambidextrous, 2-position safety levers and a right-side mounted take-down lever. Trigger pull weight measured a very consistent 3 lbs. 13 oz. on our Lyman digital trigger-pull gauge, with about 3/16” of take-up, but no creep or stacking. It also exhibited about 1/8” of overtravel, with no overtravel screw to in the trigger or frame to eliminate it. Trigger reset, however, was incredibly short at just over 1/16”. All in all, a pretty good hunting trigger.

Other features include a large, flared magazine well that makes magazine insertion something you don’t have to think about, 7-round steel magazine that drops free at a push of the mag release button, one-piece Hogue wrap-around rubber grips, an extended beavertail to minimize muzzle flip, deeply cut rear slide serrations, serrated trigger and square-front trigger guard. On the downside, pulling the slide back to lock takes two strong hands (or as Massad Ayoob would say, “two men and a boy”), and operating the slide release will be a both-thumbs proposition for some.

The .50 AE is not a widely chambered round, and we rarely test guns chambered for it, so we don’t keep hundreds of rounds from several different manufacturers in stock. All we had available was a couple of boxes of IMI/Samson 300-grain soft points (1,475 f.p.s./1,450 ft. lbs.). Until a few years ago, all Desert Eagle pistols were made in Israel by IMI, so they ought to know what to feed it. In addition, Magnum Research, Hornady, DoubleTap and Federal list .50 AE on their websites in, variously, 300- and 350-grain hollow points and soft points, but the 300-grain loadings predominate.