The debate will always rage on between concealed carry vs. open carry. Concealed carry allows you to maintain the element of surprise and not receive a strange look when eating dinner out with your family. Open carry gives you the fastest access in an emergency.

While I am not about to debate open vs. concealed carry, one stark problem can’t be ignored with the former and that simply is finding a pistol small enough to conceal, yet comfortable enough to fire accurately. Most attempts at this either turned out a tiny pistol that was chambered in an anemic caliber such as .380, .32 or .25, or delivered a larger pistol in 9mm or better that just wasn’t effectively accurate under stress.

In 2007 Walther addressed this with their first PPS. It was certainly a step in the right direction. However, Americans never warmed up to the magazine release on the trigger guard, and the grip, although flat, left a lot of airspace in the hand, making controllability less than ideal.

Enter the PPS M2. Walther’s new PPS M2 (short for Police Pistol Slim) addresses these issues and more to deliver an amazing little carry gun that became an instant favorite around our range.

Let’s start with the ergonomics. If you have had the pleasure of shooting a PPQ it will feel very familiar. The grip has a very form fitting palm swell and aggressive texturing that helps it stay put during firing. Previous to this design, comfort never held a premium, as a carry pistol “would most likely never be fired”. This is true as long as you ignore the most important aspect of carrying a pistol to defend your life—PRACTICE! Carry guns often are plagued with issues that revolve around the idea that they aren’t going to get much use. Next to ergonomics, caliber is the worst offender. Finding ammunition for many of these pocket pistol calibers can be harrowing, especially if you are limited to the big box stores. Once found, there is usually a considerable premium payable to purchase said rounds. All of this inconvenience to have a mouse round to stake your life on. Coming in 9mm, and later .40 S&W the PPS M2, fires very readily available, affordable rounds that will be much more effective in a fight than the mouse rounds. 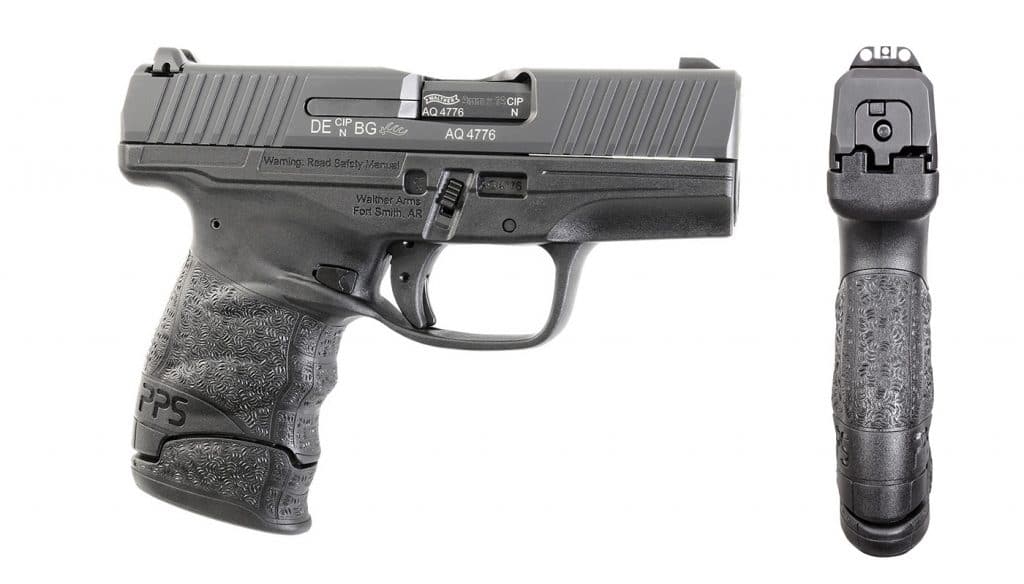 At an overall length of just 6.3 inches, this gun can be concealed in a variety of locations in many different styles of dress. Weighing in at just 21.1 oz. empty, the PPQ M2 delivers compact firepower in a very easy to manage weight. This is another key characteristic of a carry gun. A firearm that is bulky and cumbersome is more likely to be left home. This new piece from Walther is also very slim, coming in at only 1.04 inches at its widest point. I had no trouble concealing mine in a TUFF Products iTuck holster (www.tuffproducts.com $42), among many other holsters.

The trigger houses a traditional integral safety, leaving no steps between the draw and the round on target. I simply won’t carry a pistol with any other type of safety; the inability to disengage an external safety—or the oversight in failing to do so—during presentation could cost you your life. The trigger broke at an average of 6 lbs. 6 oz. per my Lyman Digital trigger pull scale (www.lymanproducts.com $74.99). There was very little creep before the release, and an amazing reset of just 1/8 inch. Much of the design is transferred from the PPQ, making this a wise choice if you already compete with or open carry a PPQ.

The new push button magazine release ejected the magazine with little effort and reloads were very intuitive. Out of the box my test sample came with both 6- and 7-round. Even with my large hands, the 7-round magazine gave me more than enough room for my pinky. The 6-round magazine gave a very concealable flush fit to the mag well and still was comfortable to shoot. Recoil was very manageable, giving me a hammered pair time on average of 1.13 seconds with both shots in the alpha on a standard USPSA target at seven yards.