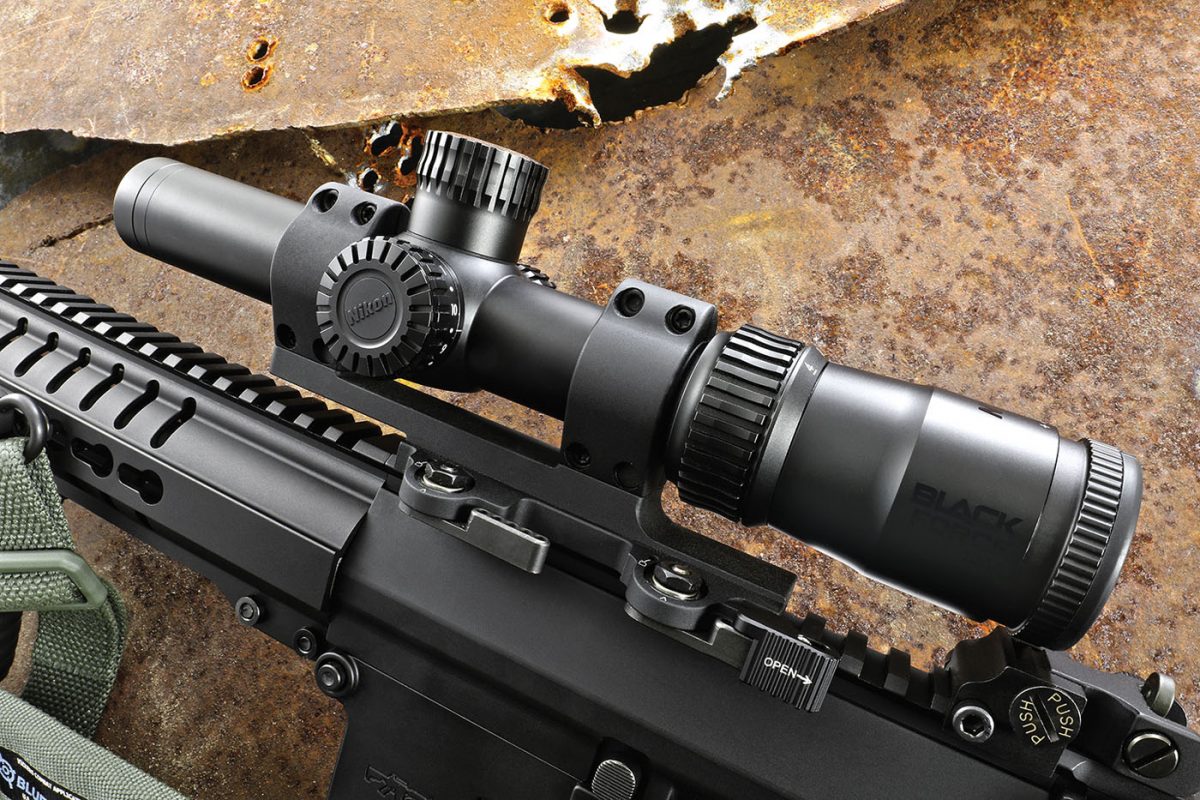 The best value yet in a low-power, variable optic?

For decades optics giant Nikon has delivered on amazing hunting optics. With the rise of the shooting sports, and particularly the modern sporting rifle, Nikon now brings us the BLACK line. This new line of optics is geared toward the competitive and recreational shooter, not just the sportsman. We just happened to be lucky enough to snag a BLACK FORCE1000 1-4x24mm ($399.99) to put through its paces.  Read on to see how it did.

Unpacking the new glass, my first observation was its weight. At only 16.4 ounces it barely changed the feel of our test rifle. Shoulder a rifle bearing this lightweight optic and you’ll immediately take notice of the next attention  grabber, the SPEEDFORCE reticle, Nikon’s newest illuminated reticle sporting a 2-MOA main dot. The user has the choice of 10 intensity levels with an off position between each one, making it easy to not only turn on and off, but also return to your preferred setting without looking and with just one click. Aiding the central red dot are two flanking “+” symbols that are spaced approximately 12 MOA apart. Covering all three are two “horseshoes”. This configuration is designed specifically for competition targets, such as IPSC and IDPA cardboard, as well as steel pepper poppers. At 4x magnification the inner horseshoe will “frame” the outer edges of a standard IPSC or IDPA target.

This is very helpful for range estimation in use with rapid holdover. Once target distance has been estimated, there are BDC circles that will get you on target out to 400 yards. These subtentions are calibrated for a 55-gr. 5.56 flying at standard speed. Below that are standard MOA hashes that will get you out to the practical range of a 5.56 NATO.

For our testing we mounted the BLACK FORCE1000 onto a Frontier Tactical 16-inch 5.56 upper using Nikon’s new 1-piece M-Series 30mm mount ($79.99)  and zeroed for 100 yards. The 30mm tube gave us a massive adjustment range, with a total of 868 clicks. Adjustments are in 1/2 moa for both windage and elevation, making it very fast to dial in your clicks and start shooting, or dial in come-up on the fly. Once we were dialed in all that was required to reset the knobs to zero was to lift them up and turn them. The spring tension snaps them back down into place and you are ready to rock. Shortly after we set up a mock 3-gun stage and commenced fire.

We found the subtentions to be accurate for hold-over at 4x as stated in the manual. Transitions were smooth and target acquisition was very fast. The 1x setting was a true 1x and it ran just like a holographic optic. I enjoyed the extra pluses on each side of the center dot; I felt that it made it easier to track the reticle. The Y axis also served to help ensure that the rifle was level for the awkward shooting positions that are the norm in 3-gun. Overall I was very fond of my work with Nikon’s new optic. It held zero, even through aggressive barrel dumps and overall rough service.

The tube coating was also surprisingly resilient to the abuse it took being staged out on tables covered with a film of sand. The reticle was instinctual and being the BDC was built with just one round in mind. It was very accurate. Take a look through one at your local dealer, or for more information contact Nikon Optics, Dept. OT; Tel.: (800) 645-6687; Web: www.nikonUSA.com