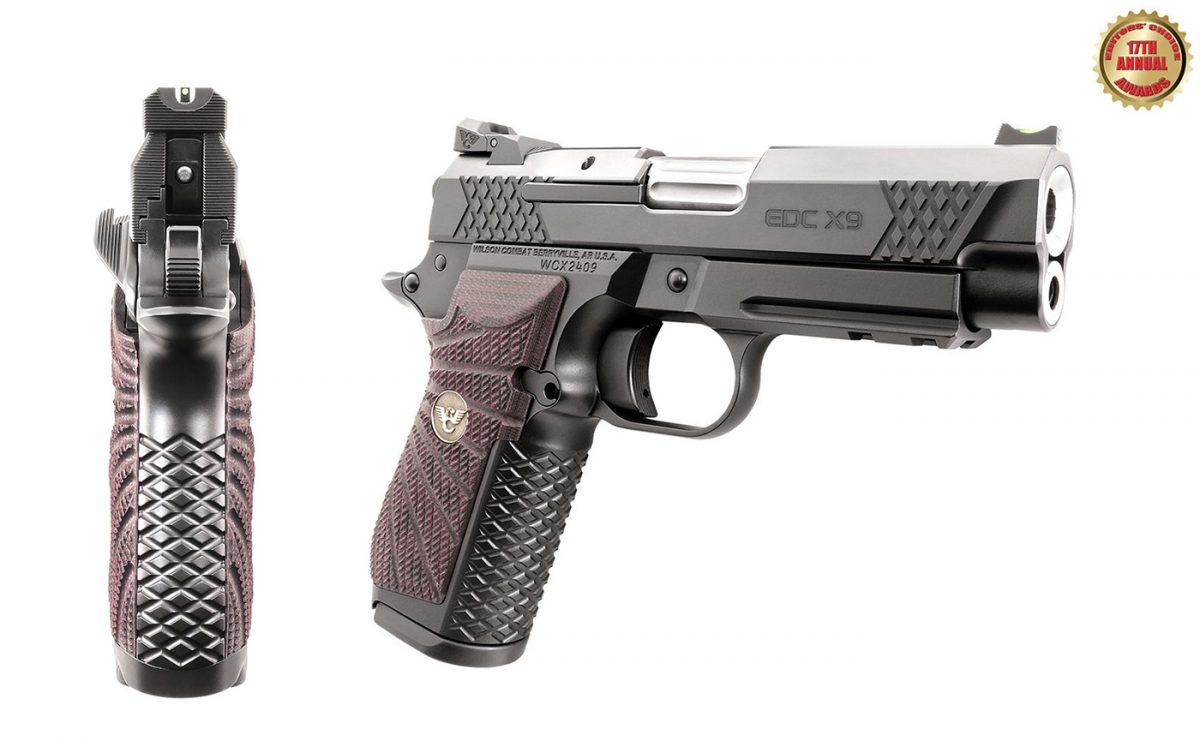 This new pistol blends 1911 design with “wonder-nine” capacity and prestige-level quality to earn itself a 2018 Editors’ Choice Award.

Picture the 1911 pistol in one of its most classic formats, the shortened-barrel, lightweight configuration defined by the Colt Commander in 1950. Picture it with a grip-frame that feels more like a Beretta 92 Compact, housing a 15-round 9mm magazine much like that of the Walther PPQ, and G10 stocks from VZ in the grippy, distinctive pattern Wilson calls “starburst.” Visualize a slide cross-hatched with high traction grasping grooves, and a fluted and deeply crowned barrel. That, my friends, is the EDC (Every-Day Carry) X9 pistol from Wilson Combat.

Ask seasoned 1911 fans why they cleave to this ancient design and the most common answer you’ll get is, “The trigger.” Short and crisp, with rapid re-set, a 1911’s trigger lends itself to good shooting. Bill Wilson is famous for the quality of his triggers, and the EDC X9 lives up to the expectation. There’s a very short, light take-up followed by a very short “roll,” and then a crisp, clean “break” of the shot. Bill likes the Series 70 style triggers, and to make it drop safe, he fits the EDC with a lightweight firing pin and a Wolff XXP firing pin spring. He finds this combination lights off the toughest primers and still passes a 48” drop test.

In keeping with my usual theme of testing the three most popular bullet weights in the given caliber, I chose Wilson Combat’s own brand for 115- and 124-grain, and plain vanilla American Eagle for 147-grain subsonic.  At 25-yards the 147-grain American Eagle full metal jacket truncated cone bullets delivered a 5-shot group measuring 3.70”, with the best three in 2.05”. (All measurements were to the nearest 0.05”.)

Our Wilson pistol was true to its brand and shot better with ammo that wore the same stamp as its own. 115-grain Wilson Combat TAC XP +P comprises an all-copper hollow point rated for 1,200 feet per second from a five-inch service pistol barrel. It punched five holes into a group of 1.95”, and the best three in three-quarters of an inch. That’s darn good for a compact pistol with a 3.8-inch barrel.

The piece de resistance in the accuracy test turned out to be another Wilson Combat round, the 124-grain XTP +P, also rated for 1,200 foot-seconds from a five-inch tube. All five hits were in 1.85”, but the best-three cluster was simply awesome. The target presented with two 9mm holes and one misshapen one that measured half an inch from outer edge to outer edge and wasn’t confirmed as a three-shot group until the exit side of the target revealed three distinct radii. Center to center, near as I could tell, that trio of hits were barely more than a quarter inch apart. There are a lot of rifles that can’t stack three hits like that at 25 yards. Needless to say, I was impressed with both the accuracy of those 124-grain Hornady bullets loaded under the Wilson brand, and that of the pistol from which they were fired. My compliments to the chefs.