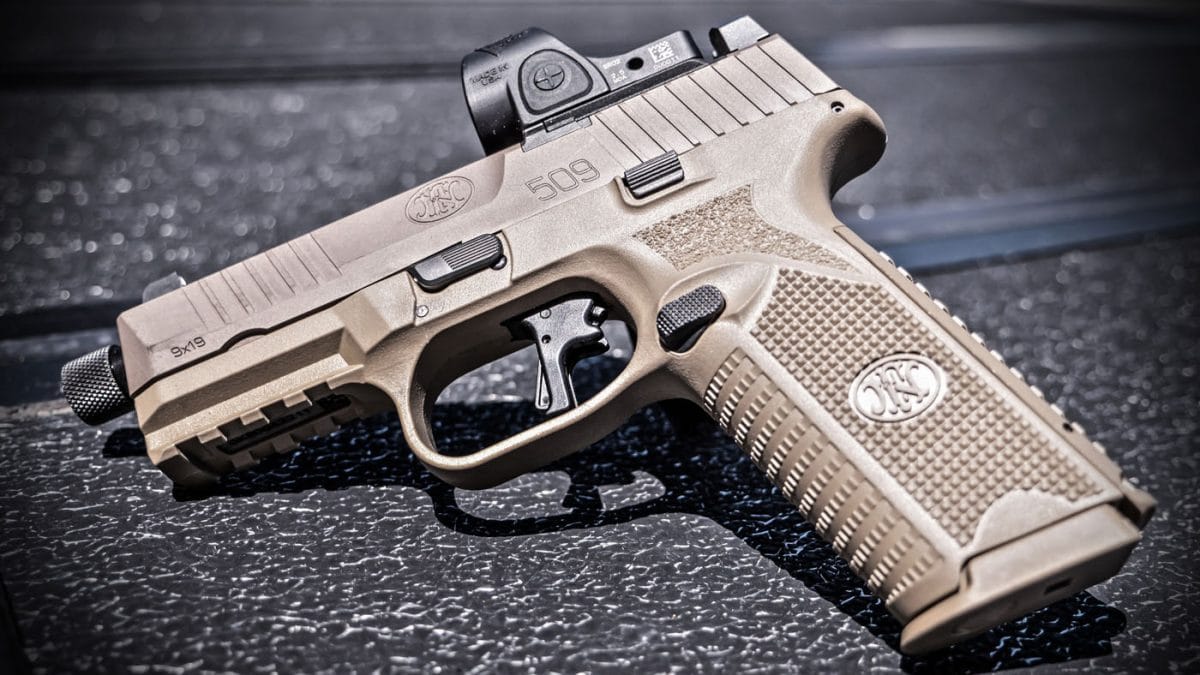 Introduced in the FN America FNS9 in 2012, the FN Apex Tactical Trigger proved to be a solid entry into the ever-growing striker-fired pistol market. Later (in 2017) the FN America 509 crossed my path and became one of my favorite test pistols.

Built for the Army’s XM17 handgun contract, it was robust and reliable and thoroughly tested. Another military contract pistol, FN’s FNP-45 Tactical was the first MRDS (Mini Red Dot Sight) equipped pistol used. For me, the 509 Tactical has become a stalwart for testing the latest MRDS, and a primary pistol for more rigorous pistol schools. It has been fantastic in general, the only downside being the trigger. As these things go, it’s not bad, better than most, just not my favorite. I wanted something with less take-up and stacking, and the Apex Tactical came through with flying colors.

Having used Apex Tactical triggers in my M&Ps for years, they are about perfect for me. Much of the take-up is removed, stacking is reduced, reset is shortened and overtravel eliminated. The flat trigger replaces the hinged factory version and fits my hand better.   It feels about as close to a 1911 trigger as it gets in this type of handgun. The Apex package for the FN509 does the same thing. Once installed, it was much easier to produce accuracy at range, doubles at close range were faster and more accurate, and overall it enhances the rest of the pistol. High round-count days are more comfortable, as are rapid fire strings.

This trigger does “drop in”, and takes a bit more work than others. It’s not complicated and can be completed with simple tools . . . just lots of small parts. The FN509 pistol is less forgiving of “errors” made mostly due to a lack of patience. If you intend to install it yourself, the Disassembly Fixture is an absolute must, and will be the best $35 you’ve ever spent. Removing the unlocking pin requires a real hammer and punch. This fixture holds, aligns and allows you to remove the pin using a solid flat surface without damaging the frame or your knuckles. Slow and steady is the trick with both the fixture and 509 installation, with videos as constant companions. Even with decades of gunsmithing under my belt, that’s what I did and it worked great. If you are not sure, check the video; still not sure, call them up. It took me about an hour, all said and done, never having taken a 509 apart before and it worked perfectly.

Trigger pull weight was reduced by a couple pounds, measuring just over 5 pounds with less pretravel, overtravel and reset distance. The break is crisp with much less stacking, . . . it is worth every penny and the time to install.  The trigger kit is priced 149.99 ($154.95 in FDE or red), and comes with the sear. The fixture is $34.95 and it also works with the FNS and FNS Compact. As always, if you feel uncomfortable doing it yourself pay a competent gunsmith. But do it, as you will not be disappointed!  Contact Apex Tactical Specialties; Tel.: (623) 322-0200; E-mail: [email protected]; Web: www.apextactical.com