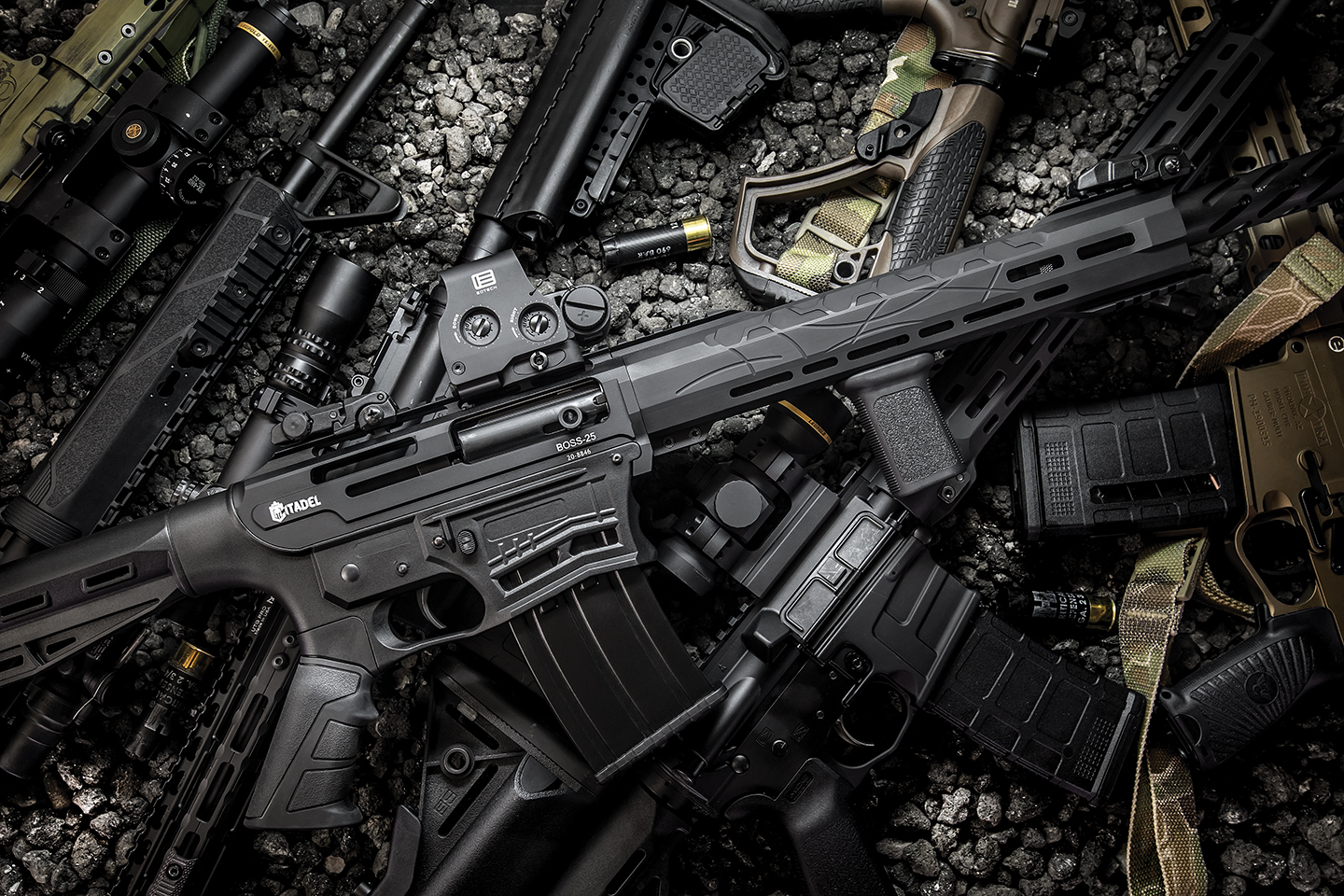 The scattergun that identifies as an AR

I’ve owned a LOT of shotguns over the years. I even collected high-grade Browning Superposed shotguns for a decade or so. I still own a bunch of shotguns—semi-autos, over-unders and side-by-sides—but they are exclusively for hunting or competition clay target use. I’ve always preferred rifles and handguns for home defense, and I’ve never owned a purely personal defense shotgun. That, however, is about to change.

I’ve become concerned lately about the over-penetration issues with centerfire rifle and pistol ammunition being fired, most likely, inside the house. Rifle rounds are almost guaranteed to penetrate a human target and continue on through sheetrock walls into other rooms where family members are sleeping. The potential for unintended collateral damage is just too high for me to rely on an AR-15 as my primary home defense weapon.

I have become so comfortable with the controls and handling characteristics of the AR platform, however, that I hate to give it up for a defensive shotgun. I’ve looked at a number of “AR shotguns” recently, but I just can’t find one I like—meaning one that handles like an AR, has a detachable box magazine of substantial capacity and is drop dead reliable. But then I found the new Citadel BOSS-25 AR-style shotgun from Legacy Sports.

I say “AR-style” because even though the BOSS-25 is a near look-alike to an AR-10—the larger of the two principal AR platforms—and handles just like any AR, it is a totally different design. Because it is chambered for 3-inch shotshells, its AR-style detachable box magazine is almost identical in size and shape to a 20-round AR-10 magazine, which is designed for the 7.62 NATO (.308 Win.) rifle cartridge. The BOSS-25 comes with two 5-round steel magazines, and additional 5-round ($34) and 10-round ($39) magazines are available from Legacy Sports on their website, so loaded capacity is on par with or better than other 12-guage defensive shotguns. ProMag also has this platform supported with a 20-round drum and 10-round stick magazines but we have yet to try them to see how they run. We’re told that the BOSS-25 is also compatible with VR80, MKA 1919 and Panzer shotgun magazines, but again, we have not personally verified this.

Legacy Sports bills the BOSS-25 as the most versatile of shotguns, suitable for hunting, clay target sports, 3-gun competition and, of course, home defense. As if to underline that point, they include a full set of five interchangeable choke tubes. Four are flush tubes, while the Modified tube is both extended and ported. This is very unusual for a defensive shotgun, which usually has just a fixed Cylinder choke.

Built on an aluminum upper and a carbon-fiber-reinforced polymer lower receiver, the BOSS-25 is a gas-operated semi-auto shotgun, but the gas system bears no resemblance whatsoever to that of an AR. Nothing in the available literature—which is surprisingly sparse—says whether the upper receiver is forged, extruded or machined from billet aluminum, and there is no way to tell from looking at it.  But the manufacturing process is really irrelevant, because semi-auto shotguns operate at much lower pressures than center-fire rifles. However it is made, the aluminum upper receiver sports an extended, 21-slot Picatinny top rail. The bolt is cocked by pulling rearward on a round, ventilated, aluminum knob which protrudes from the right side of the bolt body.

The BOSS-25 is fitted with an 18.75-inch, chrome-lined, smooth-bore barrel, and as mentioned, it is threaded for choke tubes and a set of five tubes is included. A ventilated shroud covers the forward eight or nine inches of the barrel, and the rear two or three inches of it are covered by the handguard. The owner’s manual refers to it as a “muzzle brake,” but we don’t see any evidence that it performs such a function.

Controls, which are all mounted in the polymer lower receiver, are made to look roughly similar to those of an AR, but they are not identical, are not found in the same places, and in some cases, do not perform the same functions. The AR-compatible pistol grip is removable—although I’m not certain why anyone would want to—is nicely shaped and has front and rear textured rubber grip panels that make it very comfortable in the hand. The trigger is adequate for a defensive shotgun but is a bit one the creepy and heavy side. Take-down is nothing like an AR, and there are no interchangeable parts.

Furniture consists of a 1-piece aluminum handguard that has three integral Picatinny rail sections: one 6-slot that mates with and extends the upper receiver’s top rail; another 6-slot positioned on top all the way forward; and a 4-slot on the underside all the way forward. In addition, there are two M-LOK slots on each side far forward, plus a row of KeyMod slots the full length of the underside. Adjustable, flip-up iron polymer sights are provided front and rear.

Mounted at the aft end is a 1-piece, fixed polymer buttstock with half-inch thick rubber butt pad and a comb that is adjustable for height but not fore/aft position on the stock. Four finish colors are offered—U.S. flag motif, matte black, tactical gray, and flat dark earth—priced from $649 to $729. Critical dimensions are 37.75” in overall length, 14.0” length of pull and 8.0-pound empty weight with magazine installed (although it does feel lighter due to the excellent balance).

As previously mentioned, being dead-reliable is a prerequisite characteristic of mine (as it is with most) and the BOSS 25 checks that box … if you’re using the recommended 1,300 F.P.S. and higher shotshells. Anything less than that either does NOT cycle the action or yields spotty performance. That’s OK though — personal defense ammo is usually of the high-test variety anyway.

Using ammunition of the recommended velocity and above, the Boss 25 ran without hiccup, feeding extracting and ejecting it all, and additionally, the recoil impulse is noticeably softer than your standard pump-action gun. The sights required significant adjustment from the factory to correct point-of-aim/point-of-impact, but that’s certainly not uncommon with today’s firearms.

All told, the Citadel BOSS 25 is  a lot of shotgun for the money, and if you’re a fan of the handling characteristics and ergonomics of the AR platform, this one should probably find a spot in your safe. Well, not this one … this one’s mine. See the BOSS-25 at your firearms retailer, or for more information contactLegacy Sports International; Tel. (775) 828-0555; Web: www.legacysports.com 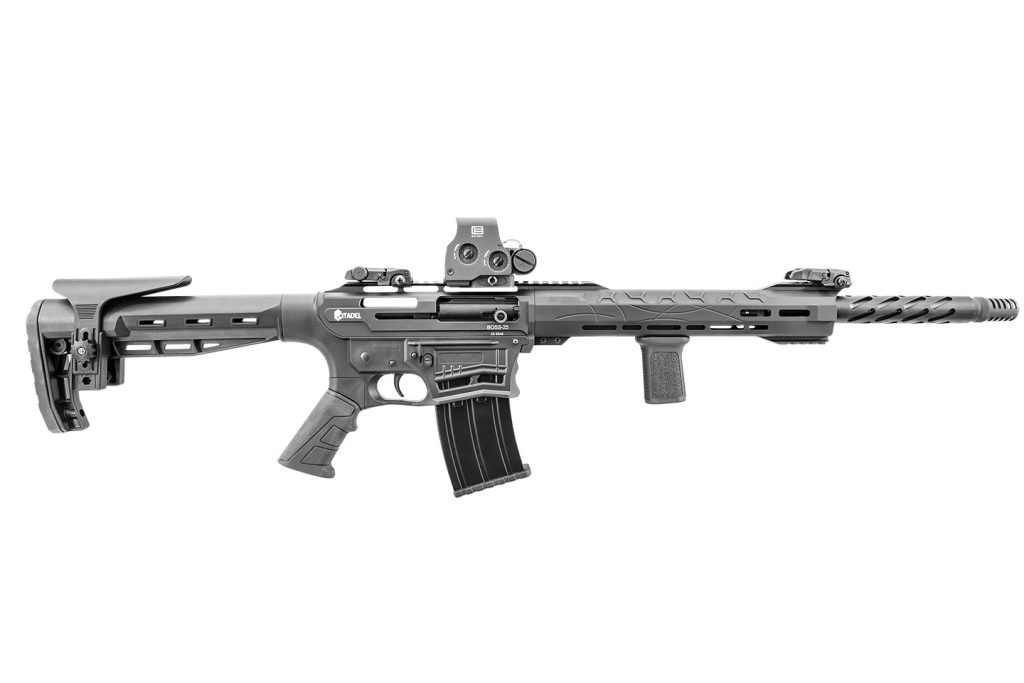