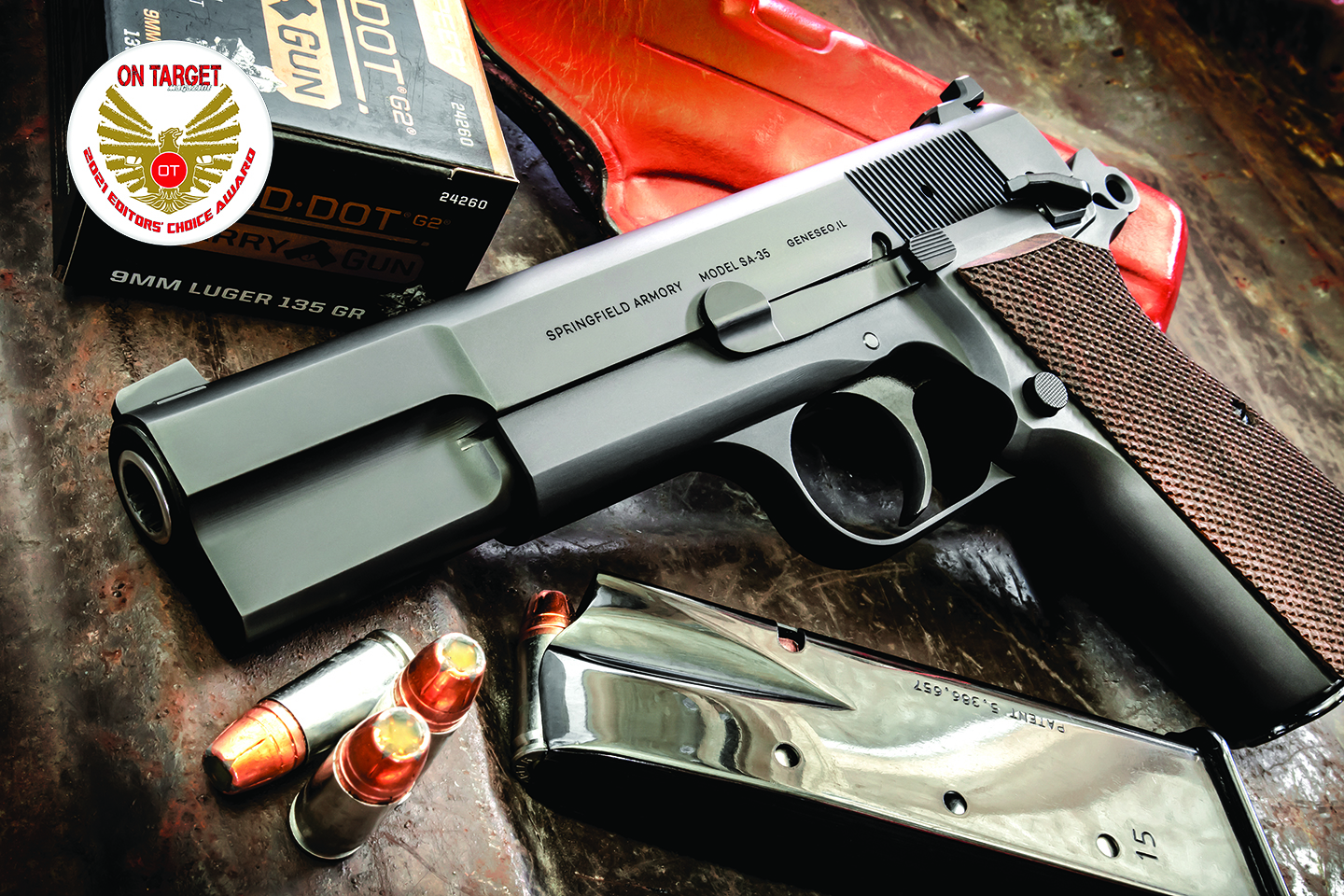 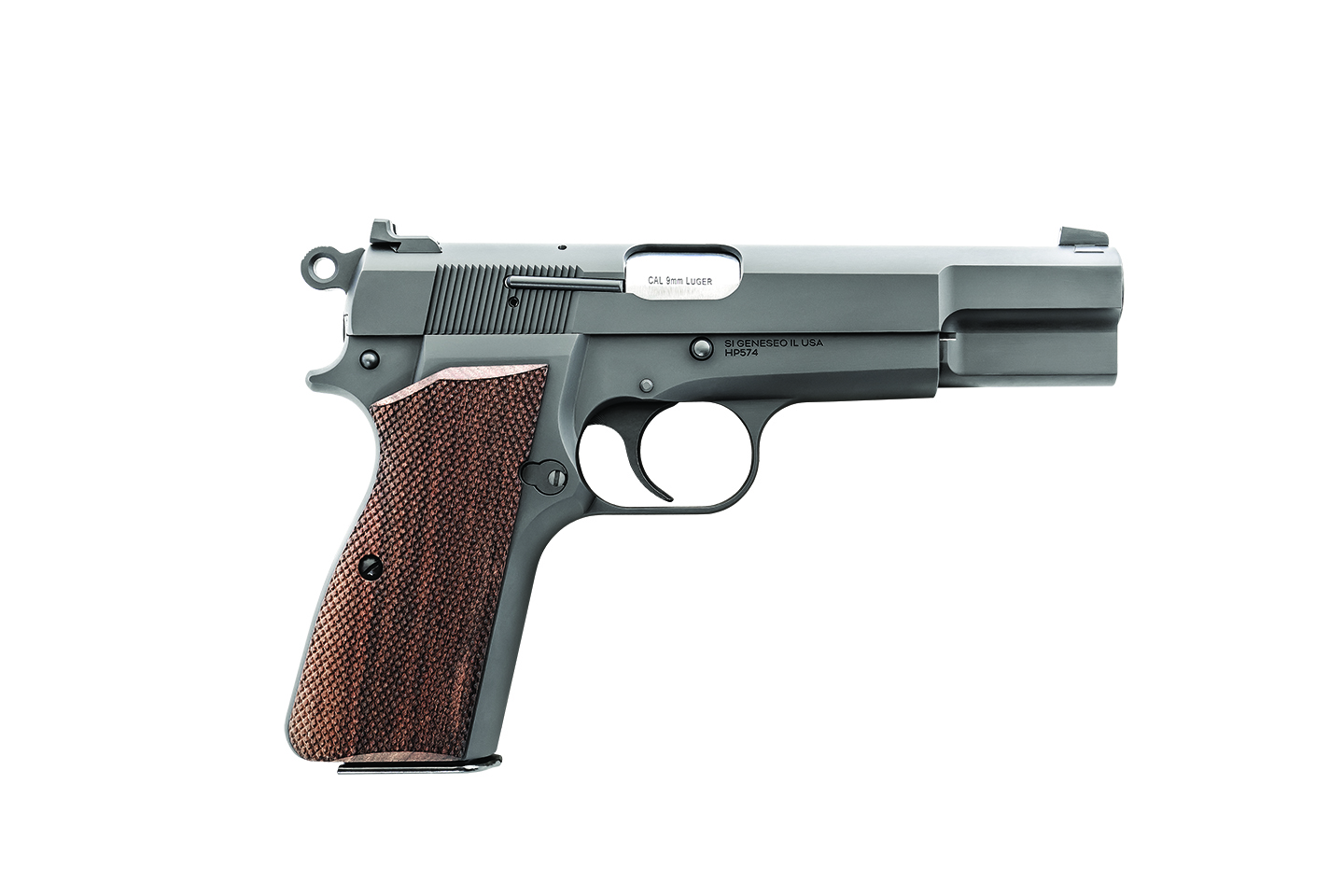 In 2021, few new gun introductions generated as much interest as Springfield Armory’s SA-35, the American company’s homage to John Moses Browning’s last masterpiece, the Browning Hi-Power pistol of 1935. Used by both sides in WWII, slim and comfortable to carry inside the waistband, this gun with its 13-round magazine set the standard for “high capacity” 9mm pistols for much of the 20th Century. Faced with reduced demand and tooling ready for replacement, FN stopped producing the Hi-Power a few years ago, and prices of used ones went up. Sing it to the tune of “You don’t know what you got ‘til it’s gone.”

Enter the SA-35: all forged steel and checkered walnut, and shipped in the box with all the upgrades we used to pay big bucks to custom pistolsmiths to upgrade our stock Brownings!

I’ve spent good time with three specimens of the SA-35 at this writing: the one I got to write up for GUNS magazine; the one popular blogger “Justin Opinion” tested and gave a

rave review; and the On Target test sample, serial number HP574.  With a few hundred SA-35 rounds fired through the trio, I’ve not yet experienced a malfunction, and I’ve been very much impressed. Here’s why.

The old Brownings had crappy little sights that wouldn’t come to the eye quickly, until

toward the end of their FN production life. The SA-35 has a big U-notch fixed rear sight, reminiscent of the Wilson Combat BattleSight. The old ones had crappy, draggy triggers thanks to the odd linkage Browning and Dieudonne Saive put into the Hi-Power to keep its thin profile and added friction caused by the magazine disconnector safety, which also kept empty mags from falling out cleanly the way we Americans want them to. The SA35 is made without the disconnector safety, and the trigger is smooth and sweet, averaging 5.485 pounds on a Lyman digital gauge and breaking cleanly for every shot. “Justin’s” SA-35 put 60 shots in a 300/300 point 4.5-inch group when I shot a demonstration qualification with it under the pressure of a couple dozen witnesses when teaching a course for him in Delaware in November. I can’t ask for more than that.

The original 13-round magazine of the Hi-Power seemed to come up short compared to modern subcompact 9mms. The SA-35 comes with a pair of Mec-Gars whose internals have been altered to work just fine with 15 rounds.

Classic Browning Hi-Powers had flat little thumb safeties, so mushy you couldn’t really feel if you had thumbed them “on” or “off.” The one on the SA-35 is positive both ways and big enough to easily operate.

Off a Matrix bench on a concrete bench, the pistol happily digested 115 grain American Eagle ball, Winchester’s super-hot Ranger-T 127 grain +P+, and Remington-UMC flat nose 147 grail FMJ.  The latter is what it was apparently sighted for, centering all shots in the black for a 3.85″ group with the best three hits in 1.70″. The hot Winchester 127 went 3.75″ for all five, 2.30″ for the best three. The tightest group was with American Eagle 115 grain ball: all five in 1.95″, with four of those in 1.15″ and the best three in 85/100ths of one inch.  The lighter bullets grouped a little low; Springfield set the sights on this one for the white dot, not the post in notch silhouette except with 147 subsonic. Since the “best three” usually extrapolates to what the gun would do with all five from a machine rest, I would postulate an average 1.6-inch accuracy potential with SA-35 #HP574.

For $699 MSRP, this SA-35 is an absolute steal. Back when dollars were worth much more than now, it cost more dollars than that to have a top gunsmith instill these features into a Browning made in Belgium. I haven’t seen a better value in a new firearm in the last year.  Worth an Editor’s Choice Award? Not just “yes” but “Hell, yes!!” Check it out at your nearest dealer or for more info. contact Springfield Armory; Tel.: (800) 680-6866; Web: www.springfield-armory.com — Massad Ayoob