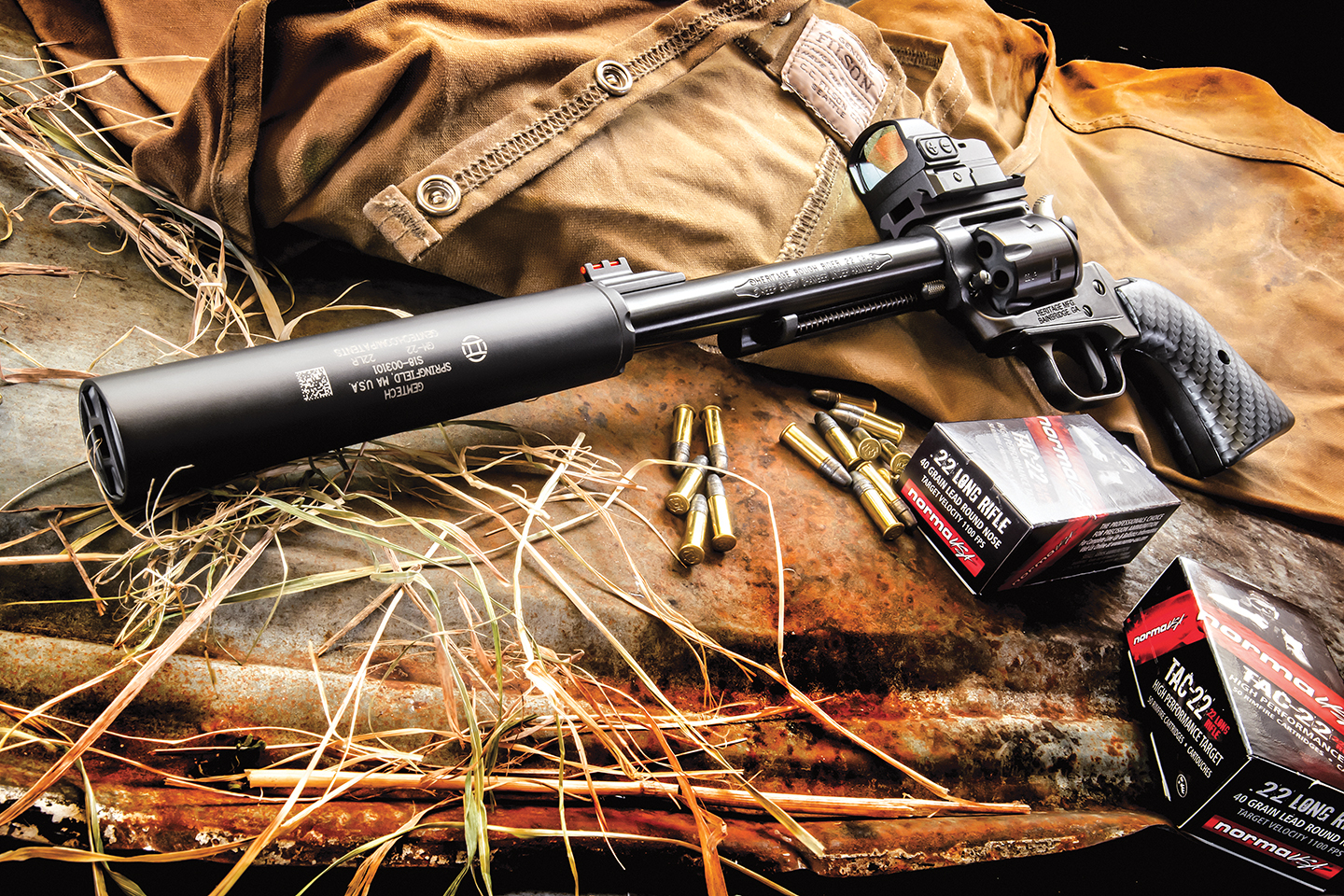 A modern six-shooter with rifle-like accuracy 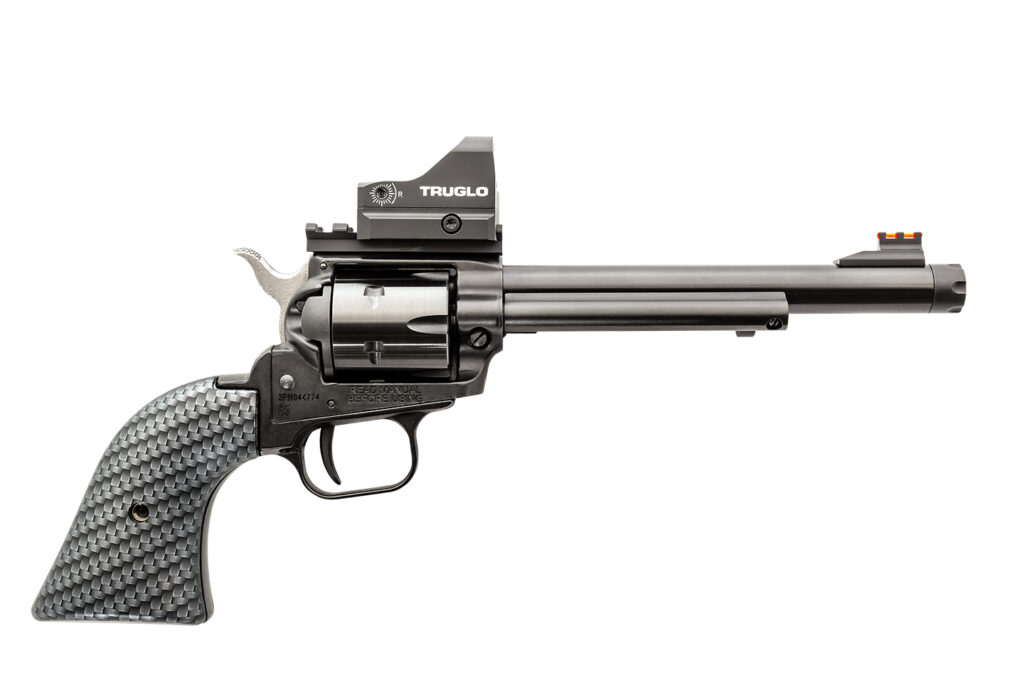 Cowboys were the original tactical tacticians, and the Wild West served as their proving grounds. I’ve often wondered what types of firearms I would bring with me if I could go back to the late 1800s, Wild West-era. A crew-served belt-fed machinegun with an unlimited supply of belted ammunition, complete with night vision and thermal accouterments, would, of course, be on my list. You know, to combat horse rustlers, gangs of countryside bandits, and to make a firm statement that I am not to be trifled with, or else you get the lead hose.

Further, more realistic(ish) daydreaming led to me pondering if a gunslinging cowboy could visit the future, what modifications would he make or bring back with him to enhance his current-era pistol. The answer for me was simple, better sights, or more specifically — a red dot sight.

While many may scream sacrilege at the mere notion of mounting a modern red-dot sight on a classic six-gun, the ability to do so exponentially increases the accuracy potential in the hands of novice and pistolero alike — especially when it comes to sheer accuracy and action shooting. As we’ve all seen in western flicks and accounts of the Wild West, the classic six-gun is more effective pointed rather than aimed, and this is due, in part, to the crude sighting systems of that day.

When I came across Heritage Manufacturing’s all-new Rough Rider Black Tactical Cowboy revolver chambered in .22LR, it quickly rekindled my thoughts outlined above, turning those thoughts into reality. A red dot sight capable six-gun? I’d like to try it, and for the retail price of $219, I had to. Given the cost and availability of ammunition at the time of this writing, we are all taking it easy when it comes to depleting our supply. Most of us learned the hard lessons 2008 taught us, and .22LR has been bought cheap and stacked deep in the years since. While the Rough Rider ships with a .22LR cylinder, a .22WMR cylinder is also available for those with the ammo supply or desiring a little extra oomph.

Now astute observers will quickly recognize what appears to be a threaded barrel on this particular revolver, in addition to a somewhat out-of-place appearing Picatinny rail. Yes, the muzzle is threaded, and no, it is not effective to mount a sound suppressor or silencer on a revolver, especially this one, regardless of the ammunition fired — subsonic, short — it didn’t matter. Sorry to get your hopes up, but nowadays, you can’t call something tactical unless it has at least a few modern features. I can only speculate that the project managers at Heritage (or the marketing department) began adding up the components necessary to call something tactical, and the Rough Rider was short one — alas, the addition of the threaded barrel. Outside of a suppressor, I’m unsure what other device could be added to a .22LR to make it more effective, certainly not a muzzle brake, extended flashider, or combination thereof. Like you, I’m at a loss, but it does add a unique appearance to the six-gun and certainly lives up to the tactical naming.

Now, the Picatinny rail is an entirely different story altogether; it’s fully functional and fully capable of mounting your choice of miniature red dot sight. With a pistol-mounted optic, low and as close to the bore is typically better, allowing the shooter to track the dot under recoil more effectively. Split times are a little slower with the Rough Rider, but as we all know, consistency is king when it comes to shooting a pistol well, so we opted for one that sits low. The TruGlo Tru-Tec did the trick, and its price point is complimentary of the gun. Bonus points for an adjustable illumination, allowing us to turn down the intensity and turn up the accuracy potential of the Rough Rider.

The Rough Rider Tactical Cowboy is equipped with a modern fiber-optic front sight that is well-housed, shielding it from cracks and breakage that can occur in a field environment. The rear sight can be described as a notch-style if you consider the voluminous channel down the center of the Picatinny rail a rear sight. While it can get the job done at close range engaging comically-oversized targets, you definitely will not be earning your Presidents Hundred tab using the iron sights as equipped.

While the lack of a rear sight on a cowboy action six-gun named the Rough Rider was slightly perplexing at first, we quickly got over it when the shooting started. The addition of a red dot sight brought with it simplicity of target acquisition and absolute ease of effectively putting lead on target. Pair those benefits with a surprisingly crisp single-action trigger, and you’ve got a receipt for a shooter.

And the little Heritage is indeed a shooter and far more accurate than you may be expecting. Launching inexpensive 40-grain Federal Automatch, picked up at a local Walmart shopping trip, yielded consistent sub-one-inch five-shot groups at 25-yards without much effort, with the best performance of testing being a 0.83-inch cluster. That is rifle-level accuracy right there sitting in the palm of your hand. Color me impressed.

As much fun as we had shooting the Heritage Rough Rider Black Tactical Cowboy, we did lose the screw holding the shell ejector assembly in place just after the second testing load’s final five-shot group (thankfully). As such, we only evaluated two loads, which also explains why the entire ejector assembly is missing in the target image. Nothing a new screw and a little Loctite can’t fix for future outings.

At the end of the day, the Heritage is a fun and accurate .22LR six-gun with modern attributes that encourages lighter-hearted range trips while still being practical enough for casual pest control — all in a package that is way more accurate than it should be for the price. Red-dot equipped and bagged up on the bench, it would be tough to find a more appropriate training tool for that little cowboy or cowgirl in your life that’s just learning the ropes. You may find it amazing how an afternoon of making tin cans dance can quickly lead to not only a lifelong passion but increased responsibility and respect, I reckon. See the entire line of Heritage rimfire’s at your nearest dealer, or for more information, contact Heritage Manufacturing; Tel.: (229) 515-8099; Web: www.heritagemfg.com.