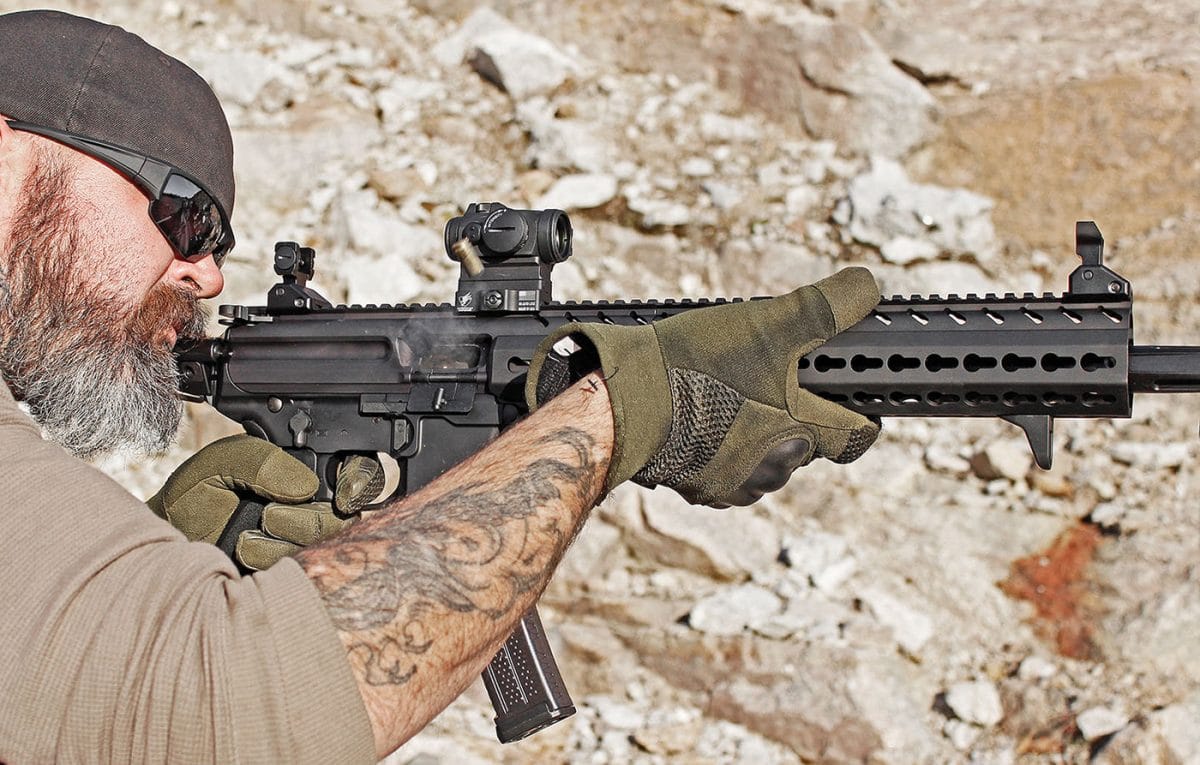 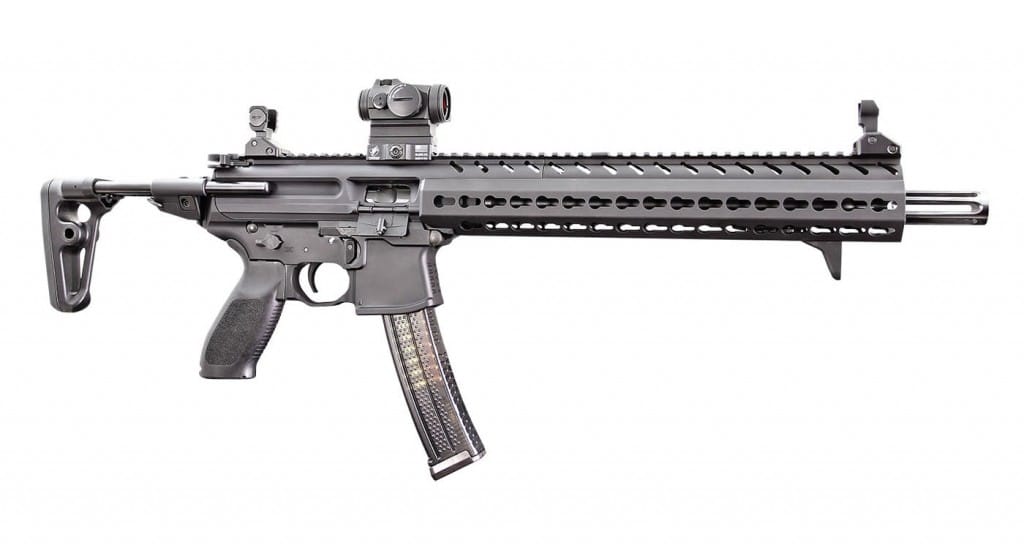 SIG Sauer’s new 9mm SIG MPX submachine gun was designed for the company’s military and law enforcement customers as a thoroughly modern alternative to the legendary Heckler & Koch MP5. In addition to a number of submachine gun and SBR (short-barreled rifle) variations, SIG Sauer is now offering the SIG MPX in two civilian-legal models: a 16-inch barreled rifle and an 8-inch barreled pistol.

While the MPX was intentionally designed to be very “AR looking”—with AR-type controls—it is, in fact, a totally new gun incorporating unprecedented in-field adaptability that lets it fill a variety of roles.

The operating system is a closed, fully locked, short-stroke, pushrod gas system. The gas block is integral with the upper receiver, with the gas tap being just forward of the chamber. The push rod is very short—just long enough to cycle 9mm rounds. The bolt carrier with 4-lug rotary bolt is permanently affixed to a 2-spring recoil mechanism that is driven rearward upon impact by the push rod, in the process unlocking the bolt, extracting and ejecting the spent case. The springs then drive the bolt carrier, chambering a fresh round and locking the bolt into battery. The MPX employs an AR-like T-handle cocking lever with extended locking latches on both sides, and the bolt remains open after the last round is ejected. The MPX will fire with the magazine removed. It’s a dirt simple design that has proven highly reliable in thousands of rounds of manufacturer testing.

Our evaluation gun was the 16-inch barreled rifle with telescoping buttstock and KeyMod handguard ($2,055), which is currently scheduled for introduction at the 2016 SHOT Show in January. The medium-profile barrel is really about 13.75 inches long, but it’s tipped with a permanently attached 3.5-inch long flash hider, giving it an overall length of 16.5 inches. This shorter barrel was a smart engineering move on the part of SIG Sauer, because the 9mm Parabellum cartridge does not generate enough gas volume—and hence gas pressure—for the bullet to overcome the friction of passing through a full 16-inch barrel, and it actually will lose velocity before it exists the muzzle. The monolithic upper incorporates a full-length, 25-slot Picatinny top rail, and attaches to the lower in exactly the same manner as an AR. A dual-aperture, windage-adjustable, flip-up rear sight comes mounted at the rear of the receiver top rail. Empty weight with 30-round magazine is 7 lbs. 10. oz.

A one-piece, 14-inch long, machined aluminum handguard features five sets of full-length KeyMod flats around the circumference, plus another 26-slot Picatinny top rail with an elevation-adjustable, flip-up front sight mounted far forward. A hand stop is mounted at the front of the 6 o’clock KeyMod flat, and the handguard’s top rail interfaces seamlessly with the upper’s top rail.

The machined aluminum lower receiver also looks much like that of an AR, and features and enlarged, integrally machined trigger guard, fully ambidextrous controls (bolt release, safety selector and magazine release), hand-filling nicely stippled pistol grip, integrally machined vertical Picatinny rail at the rear for attachment of a variety of different buttstocks (telescoping, folding or SIG Sauer SBX stabilizing arm brace), and a widely flared magazine well for quick and positive insertion of 10-, 20- or 30-round Lancer polymer magazines with steel inserts, even in the dark. The bolt locks open on an empty magazine, and the empty mags drop free every time.