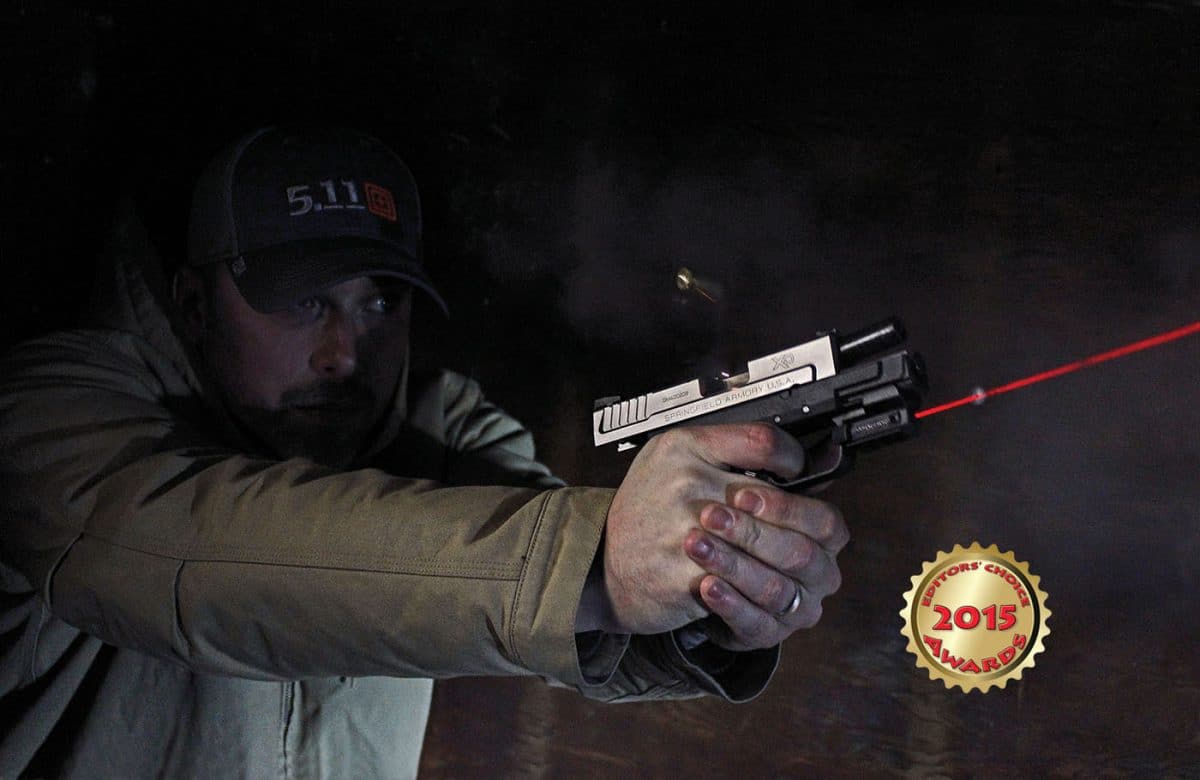 I laid my forearms across the concrete bench like an “auto hood” cover position, and fired at a reasonable defensive pace from 25 yards: not b-b-b-b-bang, but bang, bang, bang, bang, bang. The five 230 grain Nosler Match hollow points grouped in 2.35”, the best three in 1.05”—way better than one would expect from a stubby, lightweight, sub-compact .45 auto, but par for the course with this one. 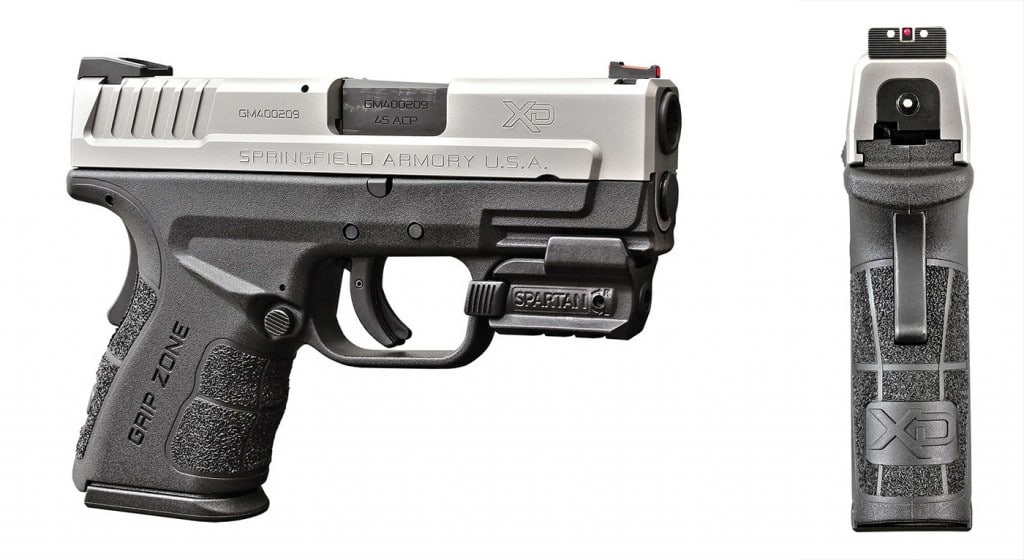 With so much attention paid to ergonomics that it has three different textures of stippling—I’m sorry, but I can’t call it anything but “triple stipple”—this latest .45 sub-compact from Springfield Armory’s XD line is appropriately subtitled the “Grip Zone Mod.2.” Its dual mag release paddles are not only appreciated by lefties, but allow any shooter to use the trigger finger instead of the thumb to dump empty magazines, which is often the fastest way to do it. It has ambi slide stop levers, too.

I liked this gun so much when I tested my first one, I bought it. Guns magazine Editor Jeff John thought enough of this little .45 to make it the cover gun for the 60th anniversary issue of the publication. It seems to make friends of all who shoot it.

In the Hand and On the Range

Despite its stubby (3.3”) barrel and short sight radius, the good sight picture that centers on a red fiber optic front sight combines with a smooth, easy trigger pull that puts bullets where they need to go. From a Matrix rest on a concrete bench, the one I tested for Guns put five Remington 185-grain JHPs in an inch and a half, and a like number of 230-grain Winchester Ranger-Ts in 1.35”.

Recoil was softer than expected for a pistol this light (26 oz.) running full power .45 ACP ammo. Just how controllable was it? Well, let me put it this way. When the FBI report came out saying the Bureau felt the 9mm was just as effective as other calibers but easier for most agents to shoot faster and more accurately, a few of us wondered just how much faster and more accurate that might be. One day John Strayer, Allen Davis and I got together to find out. Two IDPA Five-Gun Masters and one Five-Gun Expert, we gathered three virtually identical Springfield XD Sub-compacts: a 9mm, a .40, and this Grip Zone Mod.2 .45. Each of us shot as fast as we thought we could hit and factored time with score, from “up close and personal” to 20 yards, the maximum distance for the International Defensive Pistol Association classifier course. Ammo was all “heavy for caliber”: 147-grain subsonic for 9mm, 180-grain standard pressure for the .40 S&W, and 230-grain standard pressure for the .45 ACP.

Counterintuitive as it seemed, two out of the three of us shot better with the .45 Grip Zone Mod.2 than with either the 9mm or the .40 XD Sub-compacts. Make of that what you will. My takeaway is, among other things, that the XD45 Sub-compact Grip Zone Mod.2 “hits above its weight class” in terms of “shootability” and potential for delivering powerful hits on target rapidly.

Competing directly with the hugely popular Glock 30 series of small-size .45s, the XD45 Mod.2 comes with a nine-round flush-fit mag, one round short of the G30’s ten, to achieve a shorter butt and more concealability. It’s up to the buyers which features they want to trade for. The XD45 sub-compact also comes with a longer, 13-round X-Tension mag with grip sleeve. I found early on with this gun that if you want more bullets, you need that grip sleeve in place. With a standard full-size XD45 13-round mag, I found if the butt was rested on something it altered the feed stack of the cartridges and caused the gun to jam. When used with the 13-rounder with grip sleeve, functioning was 100%. Also running 100% was the short nine-round mag most folks will carry in the gun for concealment purposes: no malfunctions at all, in many hundreds of assorted .45 ACP rounds.

The “triple stipple” gives good traction, and the XD45 Mod.2’s dimensions give excellent trigger reach. The only beef I had with it was that since the stippling on the backstrap is the roughest, when the gun was carried inside the waistband against bare skin under an un-tucked shirt, it would chafe when pulling the pants up, but was otherwise golden for comfort. Larger love handles than I currently have could make that worse, of course.

Priced to compete head-on with Glock, the S&W M&P, and other striker-fired sub-compact .45s ($565 in black; $599 with stainless steel slide), this one has the advantage of being able to fire when the muzzle is at press contact with the target. This can be critical in a belly-to-belly fight for survival and I’m continually surprised that Springfield Armory doesn’t play up this feature more than they do. The On Target sample was every bit as good as the first specimen I tested. All in all, the XD45 Grip Zone Mod.2 is an excellent pistol, and gets my nomination for an Editors’ Choice Award. Contact Springfield Armory; Tel.: (800) 680-6866; Web: www.springfield-armory.com