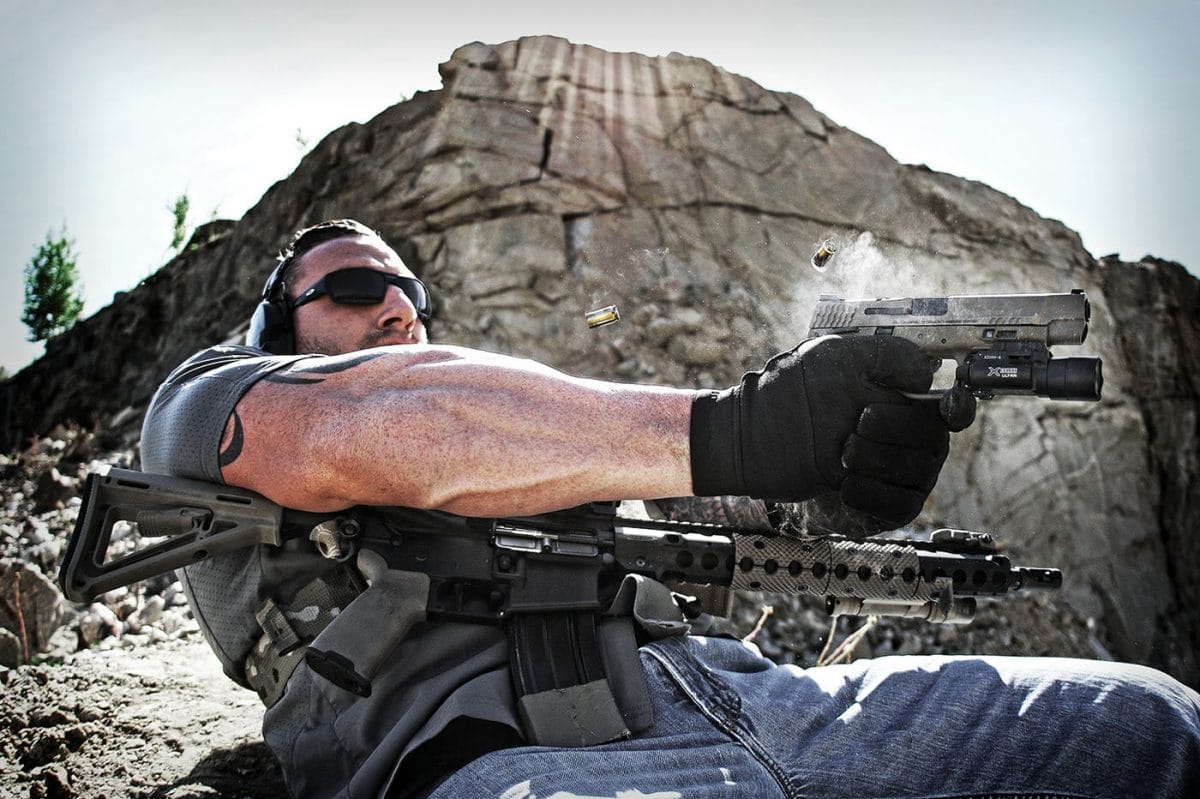 Shooting Against the Clock

I had this gun with me on a trip to Texas to teach a MAG-40 class for Karl Rehn’s KR Training in the Austin area. Shooting under time is always a good test of how a pistol handles under pressure, so while my students were watching a training video KR staffer Tracy Thronburg took me out to the range and ran me and the M&P 2.0 through a timed, sixty-shot police qualification course using the challenging IPSC target.

It started off very well, with the first six shots from my non-dominant hand only going into a very tight, dead-center group. I got a little complacent on the next stage, dominant hand only, and while the hits stayed center the group opened up a bit. For six-reload-six at seven yards, the consistent trigger pull kept the group from opening any larger. There and through the rest of the course, reloads were smooth; just as the M&P has good “trigger reach,” it also has good “thumb to magazine release button reach.” The tapered, double-stack magazines slide smoothly into the big magazine well. As the S&W engineers intended for Gen 2.0, it never auto-forwarded, but it was easy for me to reach the slide release lever with my support hand thumb as it returned to firing position, and all went well.

Once the 60th shot was downrange, I reloaded with 124-grain +P Speer Gold Dots for a return to the street, and then went forward to score. I hadn’t noticed while shooting that the farthest 18 shots were biasing a little to the right, and one of them strayed a quarter inch outside the center “A” zone, reducing the score to 299 out of 300. All 60 shots were in a 4.50” group, however, and I was happy with that. For perspective, I had shot the same course a couple of days before to demonstrate the qualification for the students with another gun I was testing that week, a prestige brand 1911 that sells in the upper $2,000 range. The group with the costlier gun was more centered and nailed a perfect 300, but the overall group measurement was slightly larger than the Gen 2.0 M&Ps, at four and seven-eighths inches. Given the price difference, I had no complaints at all about the M&P 2.0’s performance in that part of the test.

Using a Leather Arsenal Summer Surprise inside the waistband holster built by Elmer McEvoy, I carried the 5-inch M&P 2.0 for four days, two in Texas and two driving from Texas to North Florida. Long drives are a particularly good test of gun/holster carry comfort, since if the butt is far enough to the rear to contact the seat-back—which means it’s far enough to the rear to “print” under the concealment garment—you will definitely feel it. The forward tilt of the Leather Arsenal holster kept the full-length butt of the M&P far enough forward for constant comfort.

The aggressive stippling on the Gen 2.0, pioneered in the M&P Shield .45 introduced a year or so earlier, had worked well as a “man and machine interface” while shooting, but was enough to be irritating if worn under an untucked polo shirt against bare skin. With a tucked-in shirt between flesh and grip, though, there was little discomfort at all that I could discern in those four days of “from when you get up and get dressed to when you undress for bed” carry. With a forward-tilt, FBI-cant that didn’t press the stippled butt between seat back and flesh, it was just fine.

When the gun came out of the box, FFL dealer Herman Gunter III was the first member of the test team to get his hands on it. He reported five 6 o’clock misfeeds with the same magazine in the course of the first hundred rounds, but noted that the gun came in bone dry. When I got hold of it I lubed it, and there were no further problems: hundreds and hundreds of rounds went through it in many hands from Texas to the East Coast, including deliberate limp-wristing and shooting it upside down. We just kept it lubed. “You take care of it, and it will take care of you.”

I’ve always liked the feel and pointing of the M&P, and I like the 2.0 even better, thanks to the new Small and Medium-Small, aggressively-stippled grip inserts. The trigger pull is definitely better than the first generation. I like the optional ambi thumb safety, primarily for weapon retention reasons, though in four days of carry I found it had wiped off-safe twice. The lever could stand to be a little more positive in terms of staying on-safe.

Frankly, I kinda miss the auto-forwarding on the old one; many users saw it as “a feature, not a bug.” Over at the excellent smith-wessonforum.com, readers who’ve owned both seem to be favoring the Gen 2.0 for the most part. MSRP for the Gen 2.0 starts at $599, right in the ballpark for a pistol of this type. See it at your local dealer, or for more information, contact Smith & Wesson, Dept. OT; Tel.: (800) 331-0852; Web; www.smith-wesson.com