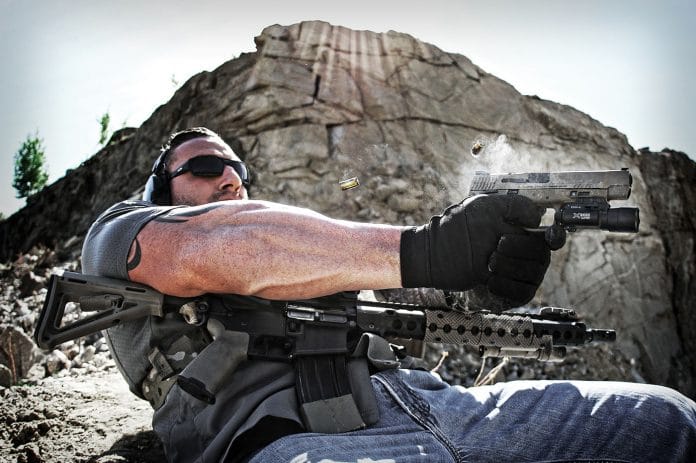 The long awaited “next generation” is here . . . and, yes, the 9mm version is more accurate than its predecessor. 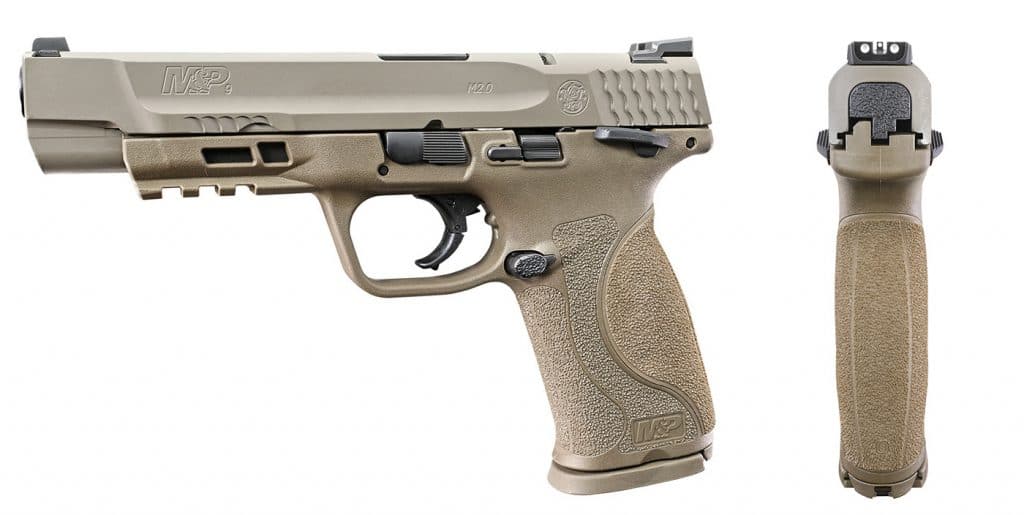 A little more than a decade after the introduction of the S&W M&P, it has vaulted to a strong second place in its class in sales against the Glock, and made a lot of friends. That’s also been time enough to address criticisms. In the 9mm chambering the new Gen 2.0 has a slightly redesigned 1:10” rifling twist for better accuracy, aggressive grip stippling and vestigial forward slide grasping grooves first seen in last year’s Shield .45, and most important, an improved trigger pull. It takes the old gun’s magazines, and is expressly designed not to “auto-forward” the slide during speed reloads. There are other minor changes, including sculpting, and a holster very tightly boned to a Gen 1 may not be a perfect fit for a Gen 2.0, though all my own M&P holsters worked fine with our 5-inch barreled Flat Dark Earth M&P9 2.0 test sample. Instead of the usual three grip inserts, the Gen 2.0 comes with four.

The trigger pull has been the most common complaint among M&P shooters; they felt the re-set was too long and indistinct, and the pull too mushy. S&W apparently got tired of hearing that, and yes, an updated trigger is “the heart of the beast” that is the M&P 2.0.

It’s still not the crisp 1911 trigger that so many people unrealistically wanted in a definitely non-1911 pistol. It does have a much crisper re-set between shots, and a relatively short re-set at that.

Pull weight? In January 2017, when I first got my hands on a Gen 2.0 at the SHOT Show in Las Vegas, the Smith & Wesson representative who had handed me the gun had a conniption fit and snatched it back when he saw me pull a Lyman trigger pull gauge out of my shoulder bag. “No, no, you can’t do that!” Well now, at last. I have a Gen 2.0 M&P and that gauge together, and the result is 6.76 pounds, measured from the center of the trigger. The one at the SHOT Show felt lighter, but I didn’t get to weigh it, so go figure.

Folks, this ain’t a lot. The Gen 1 M&Ps were spec’d for a duty trigger pull in the 6.5- to 7-pound range. Get a firm grip on the gun—take advantage of that short M&P trigger reach and get the palmar crease of your index finger at the distal joint centered on the trigger for maximum leverage—and then just roll the trigger straight back. You can expect to hit what you’re aiming at.

We’ve found over the years that the .40 S&W, .357 SIG and .45 ACP versions of the M&P were better than OK for accuracy, as were the subcompact and longslide (5-inch barrel) 9mms. The standard, service-size 9mm M&P with 4.25” barrel, however, earned a rep for very sloppy accuracy. S&W worked hard to fix that.

On Target’s test gun had a 5-inch barrel, although we’re hearing that the 4.25-inch Gen 2.0 is indeed more accurate than the first generation. At 25 yards on a Caldwell Matrix rest from a concrete bench, we tested our M&P9 Gen 2.0 following our usual protocol: Three brands in three different, popular bullet weights for the caliber, each group measured twice to the nearest 0.05” center to center between the farthest hits. The first measurement of all five hits gives a good idea what an experienced shot can deliver from a stable rest in conditions of calmness, and the second measurement of the tightest three hits correlates well with what all five of those rounds would be likely to do from that same gun in a machine rest.

The Federal 115-grain 9BPLE load, a jacketed hollow point at a +P+ velocity of 1,300 feet per second, was the load this pistol liked least. The 5-shot group measured 3.55”. However, much of that may have been unnoticed human error—the rationale of that second “best three” measurement” in the first place, because the tightest three in this case were in a mere 1.05”.

124-grain is the standard military 9mm bullet weight, and is used by many police agencies with great success in 9mm service pistols. The exemplar here was the SIG V-Crown standard-pressure 124-grain jacketed hollow point. The 5-shot group was under two inches, 1.80” to be exact, and the best three hits measurement was the tightest of the test at 1.0-inch on the nose.

147-grain subsonic is a popular choice in 9mm, particularly in North America. Our exemplar was Winchester’s brass enclosed base training load, probably the most accurate “low lead” 9mm round I’ve ever shot. It gave us the best 5-shot group of the test, with all hits in 1.70” and the best three in 1.15”.

Tightness of shot groups is one measurement of accuracy; another is how close the point of aim comes to point of impact. All on the test team who shot our sample M&P Gen 2.0 hit a bit to the left with it, and the 147-grain subsonic (as usual) hit higher than the others, as well. A visit to M&P armorer, Allen Davis, who had the proper sight pushing tool, got that fixed quickly as to windage.