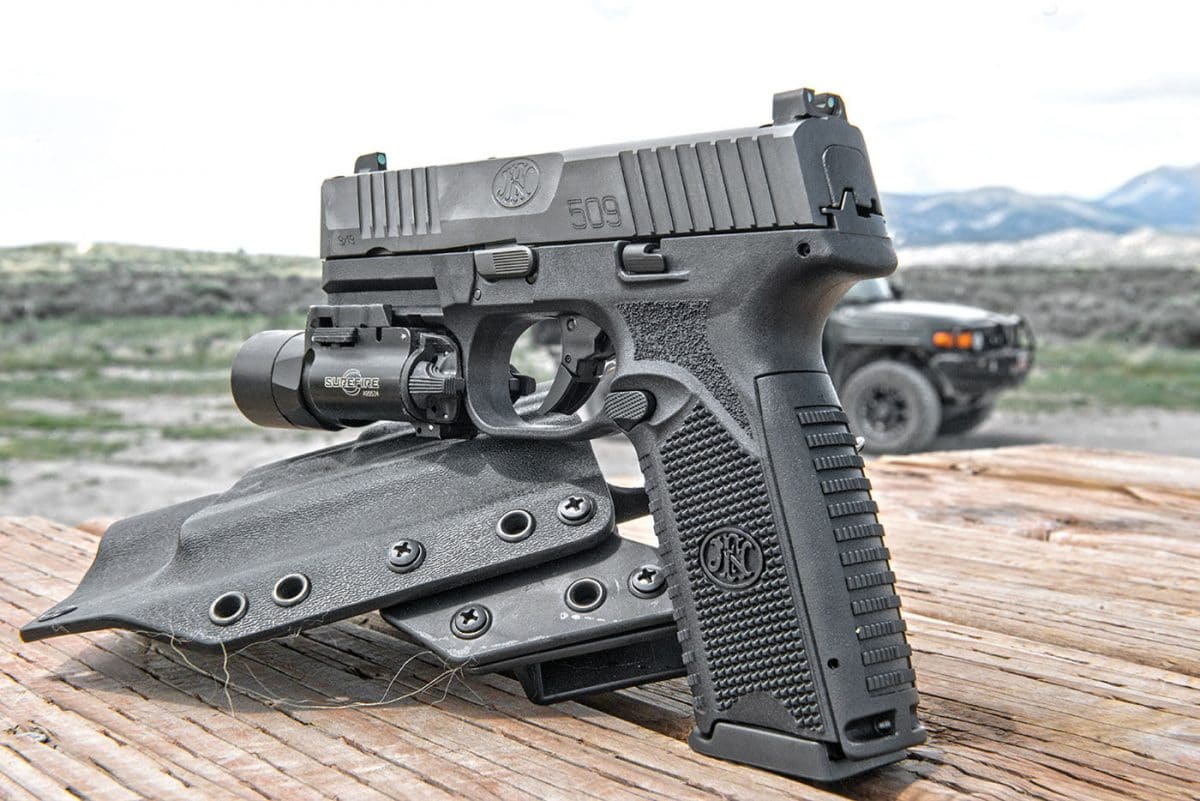 Holding the 509 was intuitive for me, dropping right into my grip. The top of my offhand palm rested directly on the notch at the top of the grip. A high grip facilitates a high hold with solid contact, and the 509 is about as good as it gets. Nestled in place, my off-hand thumb could be pointed forward, or in my case slightly upward, locking in without interfering with controls. My strong-hand locked into the grip strap and the thumb rested nicely on top of the other making for a solid grip that was intuitive on the draw. Several others who grabbed the pistol experienced the same thing, with the grip dropping right into place. My index finger dropped perfectly onto the trigger using the larger grip strap, with or without gloves. Using what I call a “broken trigger” (actually an articulated trigger), the annoying drop safety inside the trigger blade is absent. Once depressed the trigger is flat and relatively vertical with rounded edges. It is crisp, light (measuring 6.0 pounds out of the box) with a short, tactile and crisp reset.

Ambidextrous magazine releases are not always on my wish list. Teaching at Gunsite a few weeks ago I had a student who had to swap pistols mid-stream because he kept dropping his magazines during firing. The 509’s mag releases are longer, stippled, and recessed it was about impossible to activate them accidentally. Rolling my grip, fingers or gear over either side it would not release. Even smacking it against a wall, then rubbing against it (as in confined spaces) did not release it. During dry practice my thumb could access it when needed, but it never activated inadvertently. Well placed, it made swaps easy and the 509 ejects magazines with authority.

Starting out on the practical side my first drills were accuracy at range from off hand. Starting at 3 yards, 10 round strings of fire were completed slowly to determine sight hold and accuracy. At 3, 5 and 7 yards it cut one ragged hole centered on the dot. At 10 and 15 yards the top of the sights were aligned producing 10-round strings in the 2-inch range. Aligning the tops of the sights at 25 yards it was pretty much point of aim = point of impact. Using Remington UMC it was very accurate. Standing and shooting off hand at 25 yards I put 10 out of 10 on a 6-inch steel target—about as combat accurate as necessary. The sights align well and are easy to see in the daytime, but they mark the only complaint I really have on this pistol.

I will never understand the European fascination with luminescent sights. Relatively harmless in the daylight, on a duty pistol with only the rear sight exposed to the sun they can be very problematic, especially with rear dots. Exposed to the sun all day, the rears light up when you move into low light, but the front sight stays dark, leaving you hunting for the most important thing that’s supposed to illuminate (the front sight). FN’s website indicates tritium sights are available, but for law enforcement only, likely some restriction imposed by Belgium. Thankfully the sight cuts are identical to the Sig Sauer #8, making several aftermarket tritium sight sets available. Once initial testing was complete, the factory sights were immediately replaced with a set of Trijicon HDs for some video.

Group testing was equally impressive for me, with my best group measuring about 1.5 inches using Hornady 124-grain XTP. Everything else was under 2.0 inches at 25 yards using a bag rest from an improvised table on the range. From a practical perspective, the FN509 is as accurate as most humans can shoot a duty or carry pistol. It is also one of the softest shooting 9mms I’ve tested of late. Trigger pull is crisp with a bit of crunch on take-up (typical plunger contact) that smoothed up after a few hundred rounds. No stacking, with a clear wall followed by a 6.0 pound break and no over-travel. Testing after about 1,000 rounds the trigger measured consistently at 5.7 pounds.

Concealed carry was quite comfortable using a Milt Sparks VM2 originally fit for a G41. It fits perfectly and carries IWB like it’s not really there. The grip was easy to access and holds the pistol in a position that conceals it well. Despite the aggressive treatment my cover did not seem to get hung up. This is the norm in my experience with plastic pistols opposed to aggressive checkering on metal guns. Its more about sharpness, and the 509 is aggressive but not sharp.

Attaching a Surefire X300U my Raven Concealment holster designed for the APX was used. Most of these index more off the light by necessity so while not perfect it did snap into place nicely. Dropped, it allows for a solid grip and access using a plate carrier or vest. My Surefire locked into place with a snap and no movement, as did the Inforce APL. Both could be accessed using most of the more popular methods without adversely affecting my grip. Neither light induced malfunctions or produced any adverse effects, nor did the shift during rapid fire testing.