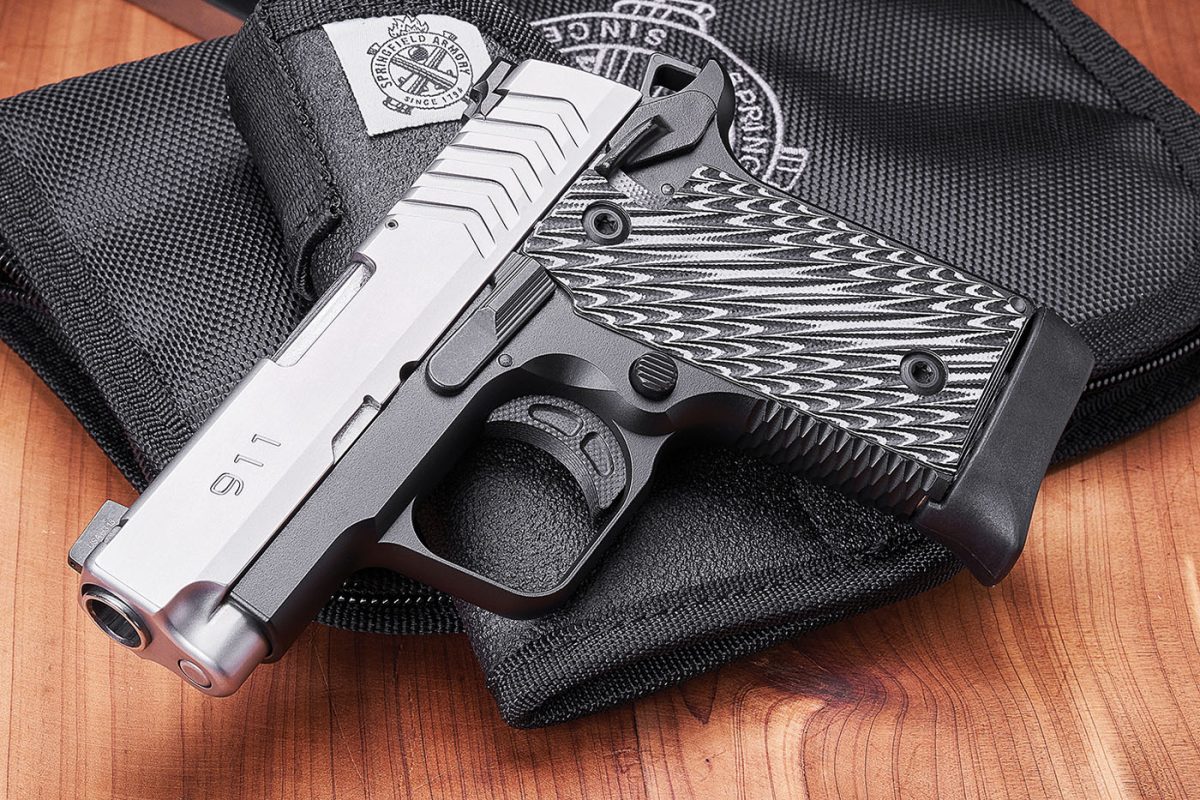 To see how the ergonomics worked under time pressure, I took the 911 to the Action Target Bianchi Plates on my range. It’s a bank of six eight-inch steel discs. In Glock matches you shoot those four times in the Pocket Glock division, each time with no more than seven rounds in your pistol. With only one make-up shot allowed and a ten-second penalty for any plate not hit, you want “all deliberate speed.” This also gave me a chance to compare the “shootability” of the 911 with the stubby concealed magazine versus the longer extended one.

With my pinky finger curled under the butt of the 911’s short magazine, times were 4.04 seconds, 6.03 (needed the seventh shot, dammit), 5.41, and 4.79 for a total of 20.27 seconds. The longer magazine ran a total tally of 20.87 seconds (needed the seventh shot again at one point). In the ten days prior I had shot Pocket Glock matches in Montgomery, Alabama and Tallahassee, Florida scoring 20.50 and 19.79 seconds respectively, so the new 911 .380 was right in the ballpark with my familiar Glock 42 in the same caliber.

I liked the pocket holster that came with the 911, a concept Ruger appears to have brought to the market last year with their LCP-II. The 911 carried flat against the thigh, and in pocket carry I found the ambi thumb safety reassuring. The twin levers are the optimum size, and adjusted perfectly for positive but easy on- and-off. With the hammer cocked and locked, the upper rear of the slide is much less pronounced and square than on striker fired guns, which don’t clear the pocket for me nearly as smoothly and surely as this 911.

Some small .380s can have a nasty kick. This one didn’t. It sounds like a cliché, but it really did feel as if I was shooting a .22. The sights didn’t really seem to move on recoil.

Loved those big, easy to see sights; they’re what you want for the surgical accuracy you need with .380. The front sight on ours needed to be a tad shorter, though. Reliability? In hundreds of rounds with multiple shooters from big to small, we only had one problem. There was an incompatibility I couldn’t diagnose between Remington-UMC 95-grain ball, the load I shoot in Pocket Glock GSSF matches because it is the most accurate I’ve found in my Glock 42, and the longer seven-round 911 mag. When I was shooting the plates, I had repeated stoppages, all 12 o’clock misfeeds.

When I tried assorted other ammo in that mag, the gun worked fine, and when I ran the Remington-UMC through the gun with the short 911 mag, that ran fine too. Can’t put my finger on it. It’s a good example, though, of why we must always test our ammo in that particular gun and those particular magazines before using them for anything serious. Overall, the test crew and I liked the little 911 pistol. If you’re in the market for an easy to run, easy to shoot, easy to conceal .380, you definitely want to look at this one. Pro-Glo night sights, grippy G10 stocks, only 12.5 ounces unloaded, and all for only $599 MSRP. Contact Springfield Armory, Dept. OT; Tel.: (800) 680-6866; Web: www.springfield-armory.com