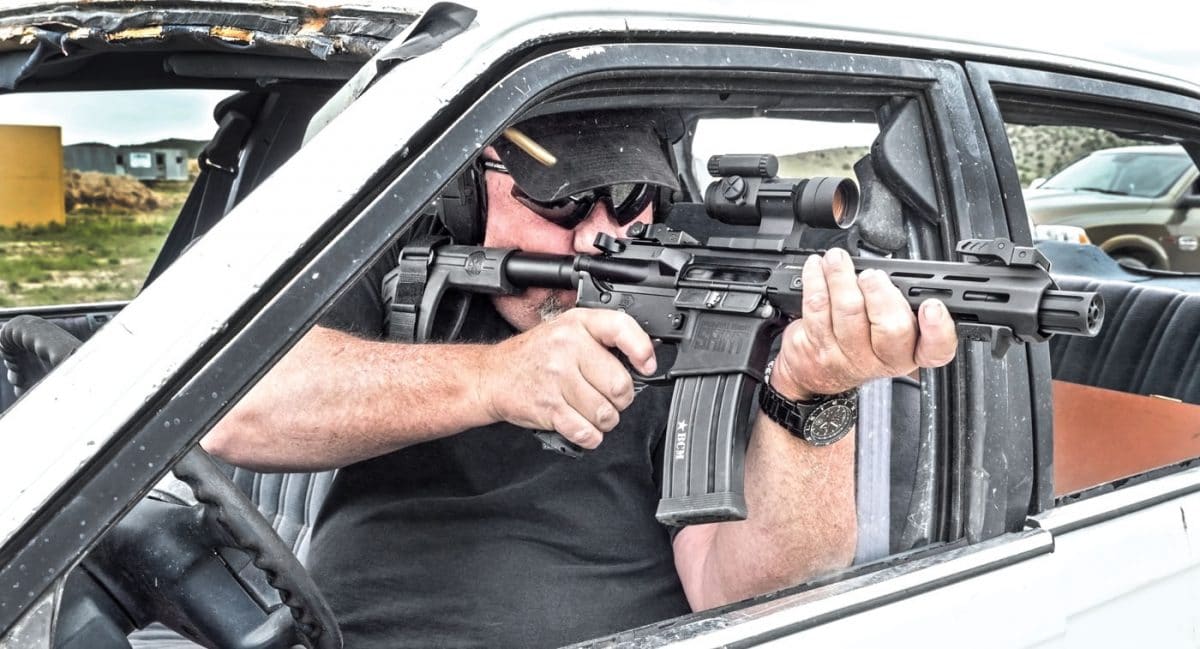 Shooting from inside a vehicle is an adventure—many decry it altogether, but if that’s where you live most of your life it’s a good thing to try if you can. Having done so with pistols, rifles, even shotguns it highlights the advantages of a suppressor and dispels any myth it’s not possible. Ideal, of course not, but the only ideal fight is the one in your head, or in a video game. The real world is less accommodating. It can be done quite effectively, just prepare to lose your hearing for a bit if it’s a rifle, the shorter the barrel the louder it is. Blast Diverters are great if they are outside the window. If you need to use it as you exit you can, and pointed out an open window there is no blast pressure, but it’s loud for sure. Shooting through the window is impressive and a bit distracting the first time, but after a few times you just get ready and go.

Maneuvering around the inside of the vehicle was pretty easy, which may be the best part of these pistols. One handed across the car through the passenger’s side window was more than doable. It would suck to be a passenger, but at least the blast and flash is diverted forward. Working out of a pretty small car it was possible to shoot quite accurately out of the windshield, driver’s side window and even the passenger side. I could reach almost 270 degrees using my strong hand alone, braced or not. Bringing it to bare from a couple of different positions was pretty handy, not something you can say using a full-sized carbine, even one with an 11-inch barrel.

These pistols are well suited for home defense in almost any available caliber. You can add a light easily enough, and the RDS makes for fast and accurate shots up close. They fit in cabinets, drawers and even closets more easily and can be used by anyone in the family. Recoil with the 5.56mm is minimal. Blast can be distracting for some, but it’s still usable by even younger adults and older children.

Maneuvering the Saint through buildings and a shoot house proved easy. It reminded me of my old days running an 8-inch barreled HK 53 on the SWAT team, my favorite entry rifle at the time. Move outside and you still have a usable weapon across the yard or even farther if needed. I regularly get hits on silhouette steel with these pistols at 300 yards. Not perfect, but in a pinch it would work and I certainly would not want to personally test the “ballistics” at that range. Black Hills 50-grain TSX is designed specifically for short-barreled ARs. It makes 2,700 f.p.s. from this barrel at the muzzle with a threshold for proper expansion of 2,300 f.p.s. Move to their 55-grain TSX and that threshold goes down to 1,900 f.p.s., making it a great all-purpose defense round for most any barrel length.

Accuracy was best using the Black Hills 55-grain TSX at about 1.25 inches. Their 55-grain TSX shoots noticeably softer than the 50-grain, making groups shooting a bit easier. While the 50-grain is quite a bit faster, it is harsher, so groups were closer to 2 inches at 100 yards. Another really good round for this pistol is the Hornady 53-grain V-Max Superformance. It makes about the same velocity as the TSX bullets with impressive expansion and fragmentation.

Inside practical distances the SAINT pistol was accurate with everything. It did pretty well on my running/stress course engaging 6- to 8-inch steel targets out to 150 yards. Most targets were from 25 to 50 yards with a few that stretched out, but hits on steel with the RDS were pretty regular and easy. It was kind of nice to run the course with such a light weapon, and moving between ranges you almost forget you are carrying a weapon. Using a Magpul MS3 sling worked pretty well, although you could add a sling attachment to the hand guard and make it better with a two-point sling. Either way it was pretty fun to run the course without humping a 15-pound sniper rifle!

This is the first SAINT AR-15 I have tested and its pretty impressive. Fit and finish are excellent with high quality and well thought out design features. The trigger is similar to GI versions that have been coated. Reliability was excellent, running everything thrown at it. Every magazine inserted easily and functioned perfectly. Accuracy is what you expect from such a short barrel. Retail price is $989, making it quite reasonable. The last three similar pistols I tested were priced from $1,500 to $1,800 with little to offer over the SAINT.