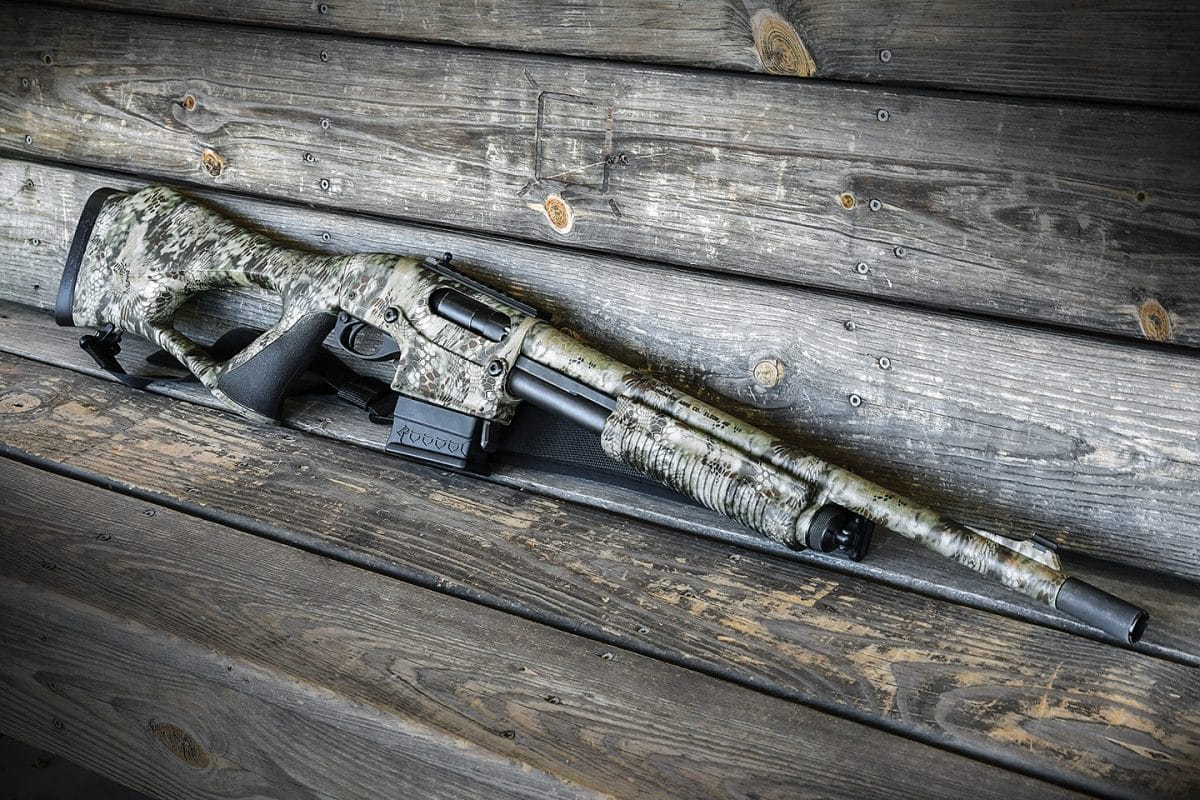 Article and photos by Mike Dickerson

Remington’s new 870 DM Predator shotgun lives up to its name in the field, giving hunters the added advantage of using detachable magazines.

It was my third day hunting the Spike Box Ranch, a 90,000-acre working cattle ranch north of Abilene, Texas, and three Rio Grande turkeys had already hit the ground, leaving me with one resident turkey tag to fill. I had never come close to tagging out on Rios before on a single hunt, and I was determined to use that last tag on the last afternoon of my hunt.

If there was anyone who could help me do it, I knew that my guide, Ronnie Ainsworth, was the man for the job. Prior to becoming a guide, he had spent 30 years in the area as a game warden and knew the big ranch like the back of his hand. He could talk turkey, and had an uncanny sense for knowing where the gobblers were likely to be at any given time.

Playing a hunch, Ronnie chose a spot that had not yet been hunted that season. We set up in the brush in a pop-up blind, and Ronnie called twice. For 20 minutes, we waited in silence until I spotted a splash of red bobbing through the brush, inbound. A few minutes later, when the lone gobbler was in the clear and presented an opportunity, I touched off a 12 gauge Remington Nitro Turkey load of no. 5 shot, completing a hat trick, plus one, on Rio gobblers.

I stared at the shotgun in my hands and smiled. The new Remington 870 DM Predator 12 gauge, with its detachable magazine, had proven itself in spades. All three other hunters on the trip managed to take gobblers with it, and one used the shotgun to stalk within 35 yards of a hog and take it down with 00 buckshot.

The 870 DM predator is one of the newest of the new line of 870 DM shotguns using the detachable-magazine feeding system. It is designed, as its name implies, for close work on predators and turkeys, but I would have no qualms about using it as a home-defense weapon. Prior to the hunt, the reliability of the mag-fed system was something of an open question, but I’m pleased to report that Remington got it right with this gun. The 870 DM Predator proved to be every bit as reliable as the time-proven, tubular-magazine-fed 870, which is to say it is very reliable, indeed.

In the interest of full disclosure I have to admit that, going in I questioned why anyone would mess with the basic design of one of the most popular and successful shotguns ever produced. By the end of the hunt, however, the gun had won me over.

It turns out there are a couple of very good reasons why Remington would put a detachable-magazine feeding mechanism on the 870. First, there’s the simple fact that many American shooters have become accustomed to and actually prefer detachable magazines on long guns. More importantly, the system lets you change loads very quickly if you need to. You simply drop the magazine (three- and six-round mags come with the gun), eject a shell if one is chambered, insert a magazine loaded with buckshot or slugs or whatever you need, close the action and you’re ready to rock. This is, in practice, infinitely faster than changing out rounds in a tubular magazine.

One thing to keep in mind when operating the DM guns is that the magazines can be a bit difficult to insert with the action closed. They’re much easier to pop into place with the action open, and that appears to be by design. The magazines have a metal upper construction and tough polymer lower portion, with a large orange follower that positively positions shells for feeding. The gun is chambered for 2 3/4- or 3-inch shells.