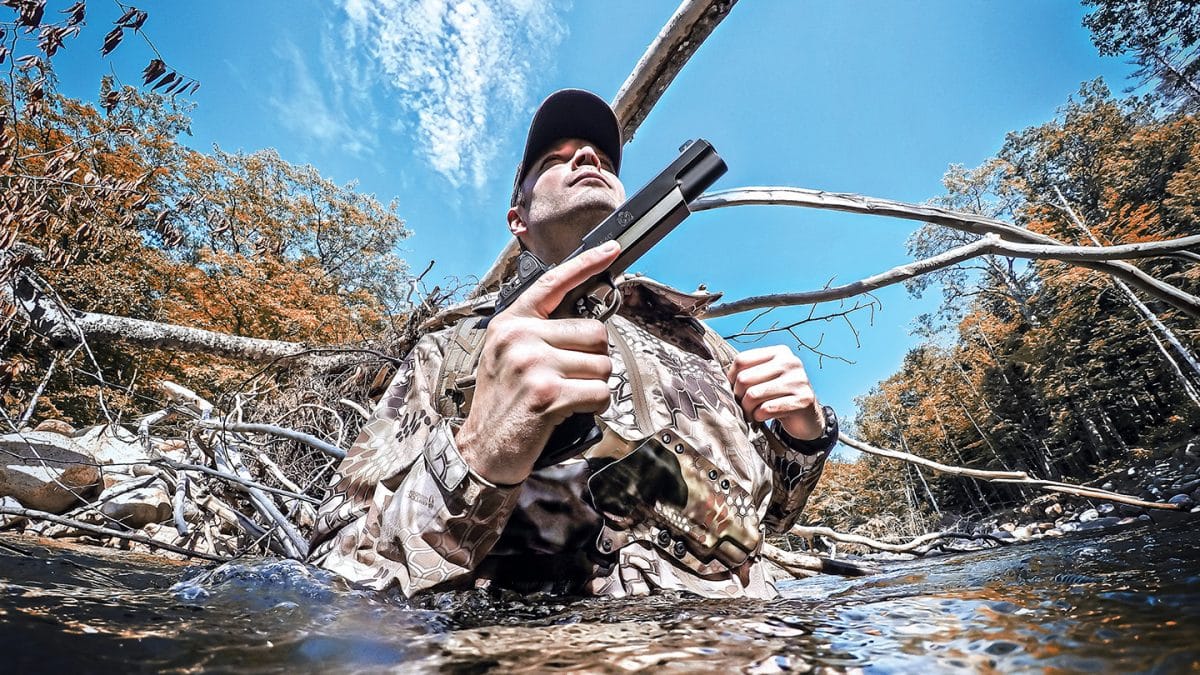 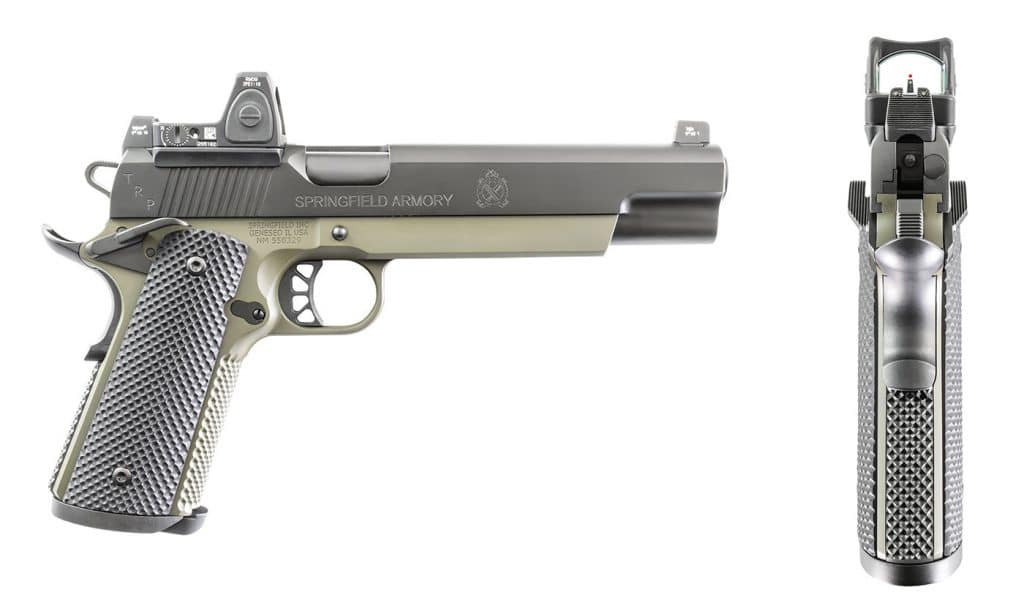 Springfield Armory has just introduced 5- and 6-inch-barreled versions of a new 10mm 1911, dubbed the TRP 10mm RMR. They are quite similar in features, with the principal difference being that the 5-inch version ($2,238) employs a barrel bushing, while the 6-inch version does not. Other differences include a Black-T frame and slide finish on the 5-inch model, while the frame on the 6-inch version ($2,289) is finished in OD Green Black-T with a Black-T finished slide. Otherwise, except for the barrel length, they are identical. Both feature Posi-Lock checkered black G-10 grip panels, front strap and main spring housing. The left-side grip panel is inletted for the thumb of a right-handed shooter.

Our evaluation pistol was the 6-inch-barreled model. I was delighted to draw the assignment for this pistol, as I’m an ardent fan of the 10mm cartridge, as well as long-slide 1911s chambered in 10mm. The 10mm cartridge was adopted by the FBI in the Smith & Wesson Model 1076 pistol as their standard duty handgun after eight undergunned FBI agents (armed only with 9mm pistols) were involved in a shootout with two bank robbers and murders in Miami in 1986. Despite out numbering the bad guys 4-to-1, the agents found themselves pinned down by suppressive rifle fire. Two were killed and five were wounded, but they eventually killed both suspects. Now discontinued, the DA/SA 1076 was offered only in 10mm. It was a big, heavy pistol with prodigious perceived recoil and significant muzzle rise, and proved to be “too much gun” for the average FBI agent, so the agency partnered with Smith & Wesson to develop the .40 S&W cartridge—literally a shortened version of the 10mm with less kick and rise—that made it more controllable for most agents while maintaining a substantial advantage over the 9mm. It has become derisively known as the “.40 Short & Weak” among 10mm aficionados, but despite that criticism, the .40 S&W has become the go-to cartridge for many law enforcement agencies across the country.

The 10mm cartridge is capable of generating 750 ft. lbs. of muzzle energy in a Glock 20 with a 4.61-inch barrel—call it 800 ft. lbs. out of a 6-inch barreled pistol—roughly twice the muzzle energy of a 5-inch-barreled .45 ACP. My standard carry pistols are the 10mm Glock 20SF and 10mm Glock 29SF, both with night sights, loaded with DoubleTap 200-grain hard cast lead loads. There’s no question that the 10mm is a highly effective personal defense round, and when fired from a 6-inch barreled pistol, is a credible round for hunting deer, hogs and black bear at short to moderate ranges.

And that’s what the Springfield TRP 10mm RMR was designed to accomplish—both hunting and defensive roles with equal authority. The “RMR” designation denotes that it comes standard from the factory with a Trijicon RMR Reflex sight with 3.25-MOA red dot co-witnessed with a set of raised, fixed Trijicon night sights. A better sighting combination for a hunting or defensive pistol there is not.

Other features of the TRP 10mm RMR include an extended beavertail grip safety with raised palm pad, 1911-style internal extractor/ejector, stainless steel, nitride-finished, match-grade bull barrel with fully supported feed ramp, ambidextrous, extended manual safety levers with serrated surfaces that snap positively on- and off-safe with just the right amount of effort to make it easily accomplished without the risk of inadvertently swiping them into the off-safe position, ventilated trigger with grooved face, extended and beveled magazine well and single, left-side mounted slide release lever and non-reversible magazine release button. Trigger pull weight averaged 4.5 lbs. on our Lyman digital trigger pull gauge, with a barely perceptible bit of creep before the break. Neither model has a Picatinny rail section machined into the dust cover.