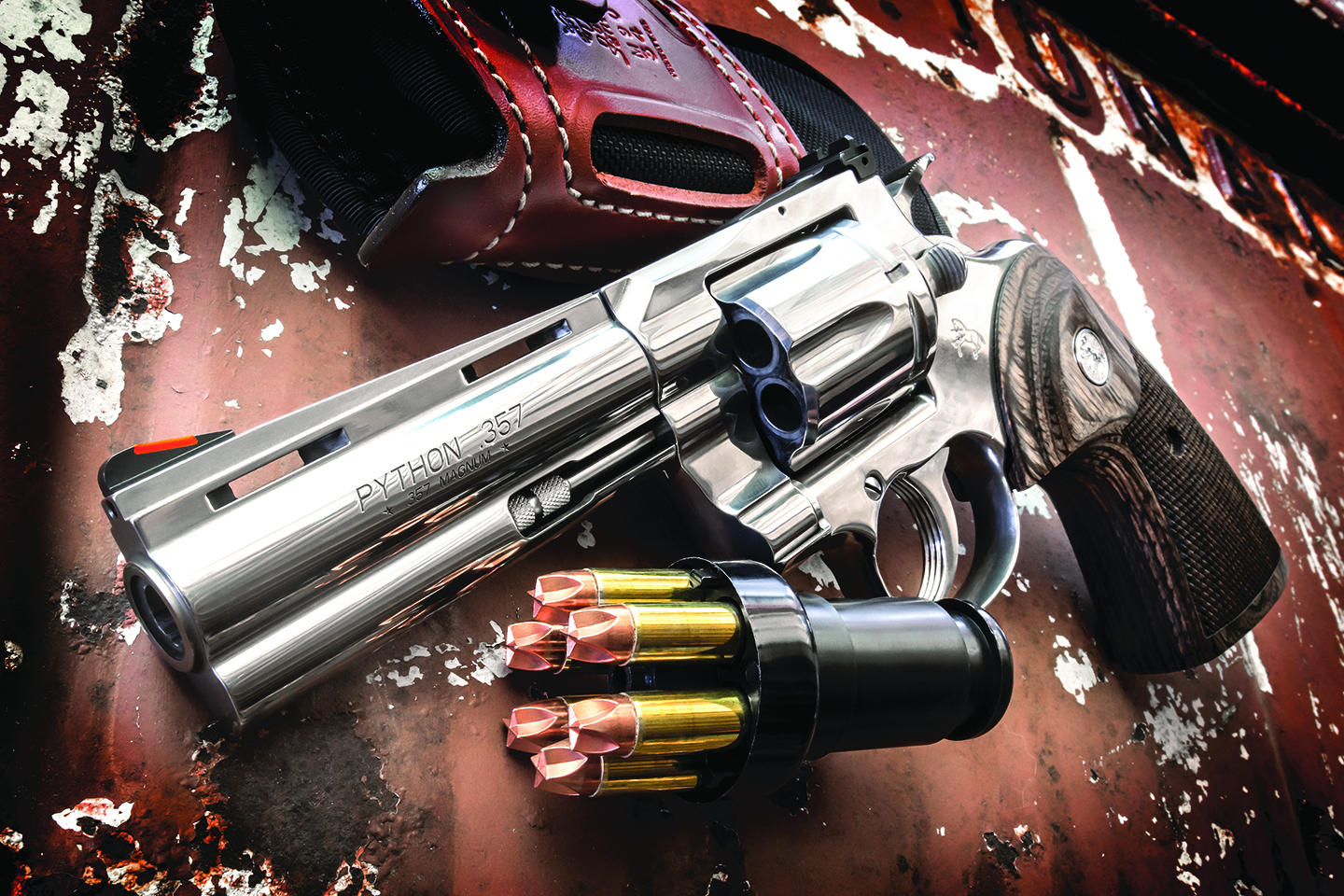 They said it couldn’t be done…but Colt DID it.

Introduced in 1955, the Colt Python .357 Magnum revolver quickly became known as the Rolls Royce of revolvers. Hand-tuned by the finest, most experienced Colt craftsmen, fitted with a full underlug barrel that their competitors would later copy, and topped with a distinctive ventilated rib, it became a “cult gun.” Pythons that sold for $125 when introduced cost thousands today. Long “out of print,” it was thought to be impossible to duplicate today due to their intensive hand-fitting. But modern CNC machining and MIM technology proved us all wrong, and now we have the new 2020 Colt Python!

To see what made the Python so special, see my three-part magnum opus on that gun from 1977, here: http://americanhandgunner.com/wp-content/uploads/2019/01/AHJF77.pdf. Comparing the new Python with my four old ones wouldn’t have been fair, because mine had all had action jobs from Jerry Moran, Reeves Jungkind or the Colt Custom Shop. Python collector, Jeff Boss, provided a stock classic Python for comparison; the older version had a lighter trigger.

The V-shaped mainspring of the original allowed more leverage to the shooter’s thumb when cocking to single action, which is why the Colt was overwhelmingly favored in center-fire bulls-eye shooting over the S&W back in the day, but it also “stacked.” That is, toward the end of the double-action pull there was a point where resistance to the trigger finger suddenly increased, and that was why the consistent, straight-through pull of the Smith & Wesson won over the double-action shooters in sports like PPC or action shooting.  The U-shaped double leaf mainspring of the new Python takes the “step” out of the double-action pull. There is a very slight increase in pull toward the end of its trigger stroke, but it’s gradual and you can’t really feel it when shooting fast.

The longer trigger stroke of the Colt allowed a lighter pull than the competition’s, and when the new Python was introduced reviewers marveled at its light travel. However, there were reports of misfires with hard-primer, foreign-made ammo, and apparently Colt had increased mainspring strength by the time our test gun, serial number PY004004, left the factory. Single-action pull was a surprisingly heavy 6.6 pounds average, measured from the center of the grooved trigger, but the double-action pull-weight was a more manageable 9.325 pounds. Early Pythons had loose screws, too-tight cylinder release latches, and cylinders that wouldn’t rotate. Colt has apparently solved those issues if On Target’s test sample typifies current production. 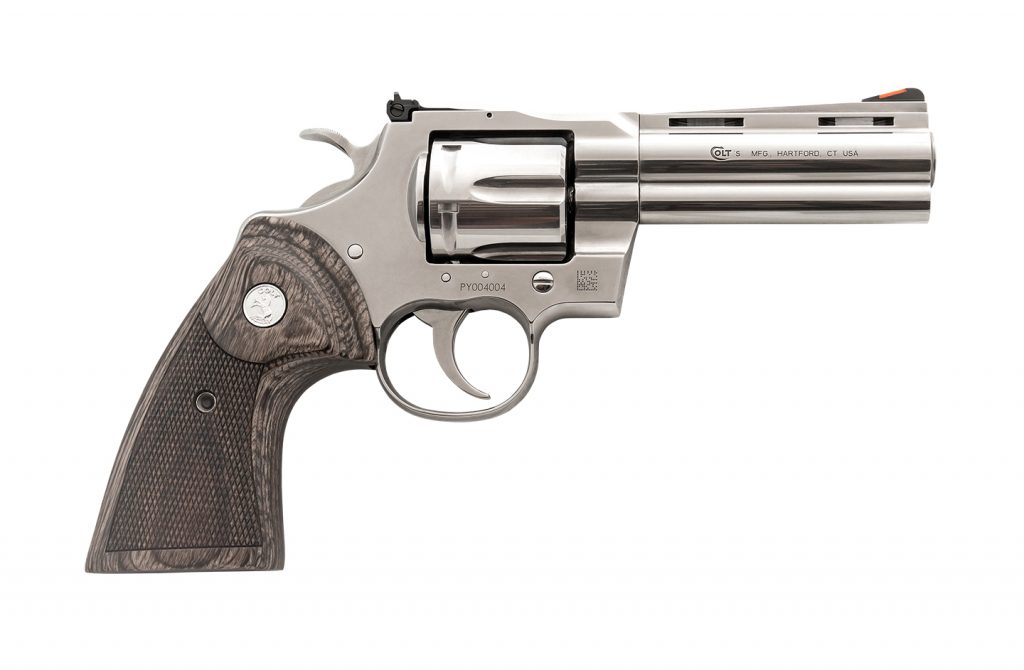 Python connoisseurs won’t mistake new ones for old by sight. The new Python is made entirely from stainless steel; the frame is a bit thicker at the top; cylinder bolt cuts are longer because of the new internals; the hammer and trigger have slightly different configurations; and the shorter one has a 4.25” barrel for compliance with Canadian law instead of the 4-inch barrel of the original (it’s also offered with a 6-inch full-lug barrel), and the muzzle is crowned, but differently. The stocks look slightly different, too. The distinctive Colt Royal Blue finish is replaced by what Colt calls a “semi-bright” finish, a much nicer polish than brushed stainless and almost as nice as the “bright stainless” that came late in the original Python’s run.

The old Colt earned a rep for being slightly more accurate than competitive brands, in large part because its “second cylinder hand” mechanism locked the cylinder dead in line with the barrel before the hammer struck home, and because Colt’s 1:14” rifling twist rate stabilized most bullets better than the 1:18.75” twist of the Smith or the Ruger.  Those features were wisely kept in the 2020 Python, and from the 25-yard bench rest ours showed 0.80” grouping potential with the ammo it liked best. We are assured that the new “guts” will stand up longer to heavy shooting than did the originals, but we didn’t have the many thousands of rounds for torture-testing to find out.

The new Python, chambered in .357 Magnum/ .38 Special, is configured to fit the grips and speedloaders of the old ones. The front sight is easily interchangeable, unlike the old. The rear adjustable sight was my least favorite feature on the new model; click adjustments were mushy, and you have to work with a set screw. The front sight came with a red ramp insert. Frankly, the original Pythons came with an Accro adjustable sight that wasn’t terribly precise, and those of us who shot Pythons in competition usually ordered them with the much better factory-optional Elliason sights. Clones are available from www.stores.kensight.com

At $1,499 MSRP (for both barrel lengths), the new Python is way cheaper than the old ones

are now, but distinctly more expensive than the S&W 686 or Ruger GP100 with which it competes as a “shooter” as opposed to a collector piece. For perspective, though, a Timex keeps about the same time as a Rolex, and telling time isn’t what folks buy Rolexes for. The Python is kind of a Rolex of the gun world. All I can say is, I’m a long time Python aficionado, and I sent a check to Colt for the test sample. See it at your gun shop, or for more information contact Colt Manufacturing Co., LLC: Tel.: (800) 962-COLT; Web: www.colt.com