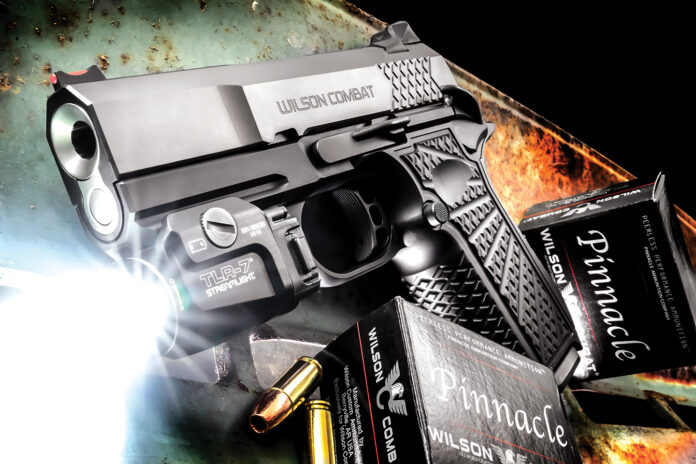 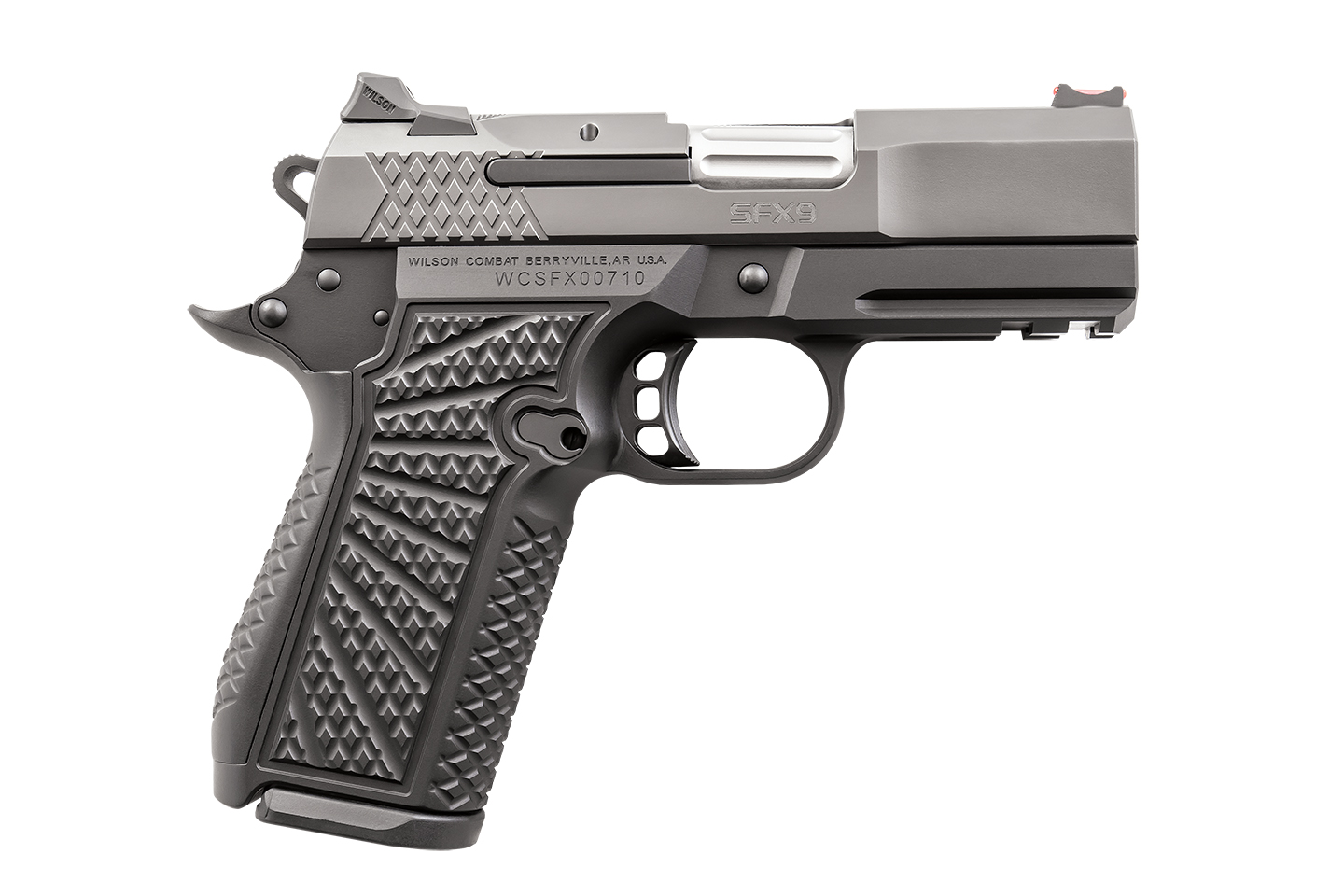 I was first introduced to Wilson Combat’s SFX9 platform as a subcompact with a shortened grip frame, and it resembled the EDC X9 with its solid machined-aluminum frame. The frame and internals were largely identical, although not always cross-compatible. With its integral grip panels, it weighed in just a bit lighter than the EDC X9, was less costly to manufacture, and the overall grip width and flat-sided dimensions were more in keeping with your typical polymer pistol. While the EDC X9 has a more-rounded feel, the SFX9 is more-square in the hand; many shooters today prefer these flatter sides, especially using what has become a popular grip that emphasizes more of a clamping effect. Since the SFX9’s introduction, Wilson Combat has continued to expand the model lineup, currently offering four different variations of slide/grip lengths.

Like the rest of the SFX9 lineup, the pistol in review uses the X-TAC checkering treatment around the circumference of the grip frame and as cocking serrations at the rear of the slide. Bullet Proof hammer, safety, and magazine release. The trigger is your typical Wilson Combat ultra-clean 3.5 to 4-pound pull with a medium-length curved pad. Made by Mec-Gar specifically for Wilson Combat, the flush-fit magazine (two included) holds 15-rounds, and my 18-round EDC X9 magazines fit perfectly with no over-insertion issues. Base pads are polymer and include dots for numbering your magazines. A dust cover accessory rail allows attachment of a light or other accessory.

The slide profile is an angled “tri-top” design with a fixed rear and fiber-optic front sight. The top of the slide is serrated at 30 LPI to cut sight-picture glare. The barrel measures 3.25-inches long and is precision-fit to the slide with no bushing. The barrel and chamber are fluted, and the reverse muzzle crown blends perfectly with the slide and recoil system for a seamless appearance. The recoil spring, guide, and plunger are a fully captured design using dual springs. The pistol ships with two 15-round magazines in a very nice nylon case.

One might expect recoil to be a bit stout given the short barrel, but it remained very controllable — one of the hallmarks of the SFX9/EDC X9 lineup. Accuracy was also consistent with what you can expect from a Wilson Combat in general — all five-shot groups came in at under 1.50-inches at 25 yards. My best effort measured around 1.3-inches, with four of the five shots landing inside an inch using Hornady’s 115 FTX load. Wilson’s 115 grain HAP was also very accurate along with the 95 grain TAC XP loads. Standing at 10 yards, it clustered rounds using controlled pairs and stayed inside a fist’s distance with hammers. Off the truck bed at 50 yards, it stayed on the 8-round round steel pretty consistently — not bad for me using iron sights. Reliability was flawless throughout testing, which has proven to be yet another shining attribute of Bill Wilson’s SFX9/EDC X9 platform.

My personal carry for the last few years has been a standard EDC X9 with a Trijicon RMR in a Palmetto Leather holster, so it gave me a good baseline while carrying the shorter SFX9 with irons sights. Loaded with the same ammunition to the same capacity, the weight of the SFX9 was 3 ounces less than my EDC X9; not a ton, but noticeable. The full-sized grip frame of the 15-round SFX9 afforded a full purchase and solid control. Both the 15 and 18-round magazines fit perfectly, and the larger-capacity magazine is really not that much longer — it’s the only magazine I use in the EDCX9, and any difference in length is worth the three extra rounds, in my opinion.

Front sights tend to be user-dependent, and the SFX9 has several options. My preference is a red-dot sight these days, but the red fiber-optic front sight on my test pistol really 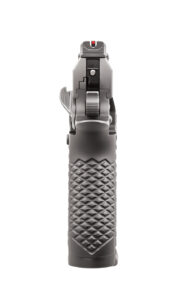 “popped” in all light conditions. During range sessions, I didn’t lose much in terms of aiming precision out to 25 yards compared to an RDS, but past that, the RDS still shines for me.

My travel is pretty limited these days, mainly consisting of to and from my office and/or the range. If anything bad happens, it will probably be from my vehicle, so a large portion of my testing occurred from inside and around my Dodge Ram. Using the Palmetto Leather holster, the SFX9 3.25 was easy to access and get on threat through both the passenger and driver side windows. Given the shorter dimensions, moving around the steering wheel and around obstacles in the truck was smooth and quick. And, thanks to the full-size grip, it handled like a full-size pistol while moving around outside of the truck. Post-training, it was not uncommon for me to forget I was wearing this pistol — it was that comfortable for me to carry.

My large hands do not handle small pistols well. Having used every grip size imaginable in my over three decades of training, deployment, and teaching, I’m pretty adaptable, however. While I enjoyed testing the version of this pistol with the shortened grip, the full-size grip turns it into a true fighting/carry pistol for me. Years running a 1911 makes the EDCX9 my favorite, but the flatter grip dimensions and lack of stocks tended to grow on me after a bit. I’m still not sure I would trade my EDC X9 for the SFX9, but after running this pistol for a few weeks, my affinity for the RDS on a carry pistol may have waned a bit. All in all, this is a fantastic pistol, built to Wilson Combat’s standards, and could easily last a lifetime or two in someone’s carry holster. Carrying an EDC X9 now? You owe it to yourself to give the SFX9 a try — it could very well be a better fit. See the double-stack line of Wilson Combat pistols at your nearest dealer or for more info. contact Wilson Combat directly at; Tel.: (800) 955-4856; Web: www.wilsoncombat.com.

Groups fired from a bag (rest) using my truck as a rest. Distance of 25 yards, three five-shot groups for comparison. Velocity in Feet Per Second (FPS) measured with a LabRadar.