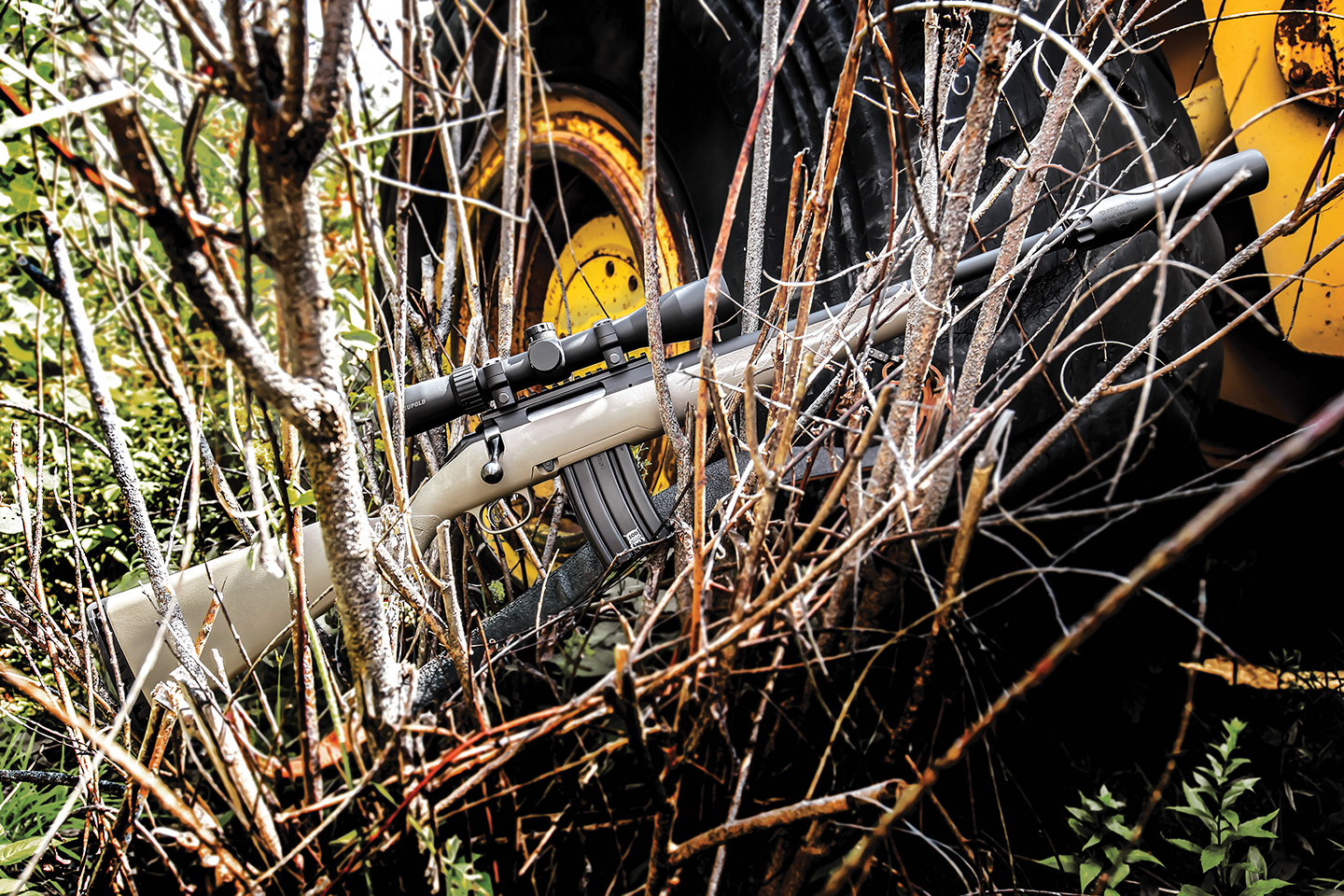 We unlock the brush-busting potential of our Ruger American rifle

Having tested almost every 300 HAM’R model Wilson Combat has built, every test has made me a bigger fan. The ballistics of this cartridge are impressive out to 300 yards, and it is inherently accurate. Its only real drawback for some is that it has historically been chambered only in AR-15 type rifles — a platform not every hunter has completely warmed up to yet. While insanely popular in general, ARs can also be expensive. From day one of testing this cartridge, I’ve thought a light and simple, 16.5-inch barreled bolt rifle chambered in 300 HAM’R would be just the ticket for a lot of hunters, and Wilson Combat has recently helped to make this a reality with their new and simple to install 300 HAM’R barrel conversion for the Ruger American Action.

Ruger’s American bolt rifle is a huge favorite amongst your average hunter. Using a 70-degree, three-lug one-piece bolt, it’s fast cycling, smooth, robust, and efficient. With the same basic barrel design as the Ruger Precision Rifle, you can swap barrels with simple hand tools. The 300 HAM’R uses a .223 bolt face and AR magazines, making our .223 Ruger American Ranch about the perfect host. At $639 retail, and with a street price closer to $500, it also remains affordable. Wilson’s barrel conversion retails at $249.95, resulting total gun/barrel investment of around $750.00 — about half the cost of many ARs.

The Wilson conversion kit ships with a 16-inch match-grade stainless-steel barrel. It’s fully chambered, button-rifled to a 1:15 twist, coated in a matte-black Armor Tuff, and threaded 5/8 x 24 at the muzzle. The package includes a new barrel nut with a matching wrench and go gauge. No stock alterations are needed.

After the barreled action has been separated from the stock, removing the factory nut is the hardest part; you can certainly try and salvage the nut, but I wouldn’t waste your time. Since the American action is flat-sided, I was able to lock it in Real Avid Master Gun Vice (realavid.com) and use a pipe wrench to easily and quickly loosen the nut with no damage to the action.

Reverse the process to install the new 300 HAM’R barrel. With both the go-gauge and bolt inserted into the action, thread the new barrel into the receiver until there is a slight drag on the go-gauge when locking the bolt in and out of battery. A “no-go” gauge can also be used, but I’ve never found it necessary. Tighten the new barrel nut by hand, and then using the supplied wrench and your own torque wrench, finish snugging it down to 50 ft.-lbs. Double check torque and reinstall the barreled action into the stock. From start to finish, the whole process took less than an hour.

My test scope was a Leupold Mark 3HD 4-12x40mm with the illuminated FireDot TMR reticle. Wilson Combat’s own titanium Quell Ultralight .30-caliber suppressor was also used after installing the requisite Quell K-Mount suppressor interface/muzzle device onto the barrel’s muzzle threads. This addition did nothing to upset balance but muffled the bark of the 300 HAM’R extremely well. Another note: this caliber requires the use of 300 BLK magazines. I used both D&H brand and one of the new Magpul 20 rounder’s during testing, but any quality 300 BLK magazine designed for the AR15 will work.

Accuracy was excellent across the entire spectrum of 300 HAM’R test loads, with the best five-shot/200-yard (rifle zero) group for the day measuring around 0.75 inches with the 125-grain Pro Hunter. The 110-grain Controlled Chaos is a devastating round at 100 yards — perfect for defense or even medium-sized game. Switching between bullet weights and/or construction does not change your zero enough to matter — one of the huge benefits of the 300 HAM’R cartridge. Using an unsupported position from a makeshift bench, I was able to ring game-sized steel for ten straight rounds at 300 yards. Recoil is minimal and suppressed it was very clean, smooth, and quiet. Carry is easy, and you are still around 8 pounds with an optic, suppressor, and loaded magazine. After about 20 rounds, the bolt ran smooth and fast. The barrel never shot loose, and the accuracy was consistent throughout testing.

This rifle is light, accurate, smooth to operate, and affordable, not something you see these days. Medium-sized game is viable inside 300 yards, and Bill Wilson has taken game up to 600 pounds with the large hard cast bullets in the 200-yard range. It meets the needs of the vast majority of hunters and works well as a defense rifle without all the baggage the AR has at the moment. Loaded with the 95 or 100-grain Controlled Chaos round, this would be a devastating hog hunter, a capable deer rifle, and a fantastic all-around ranch rifle. I liked this one enough that it is sticking around; try it, and you may come to the same conclusion.

Bullet weight measured in grains, velocity in feet per second (fps) was measured using a Magneto Speed V3. Accuracy in inches for three five-round groups fired from 200 yards using a bag as a rest from behind a bench.