When I was the Director of Military Business Development for Aimpoint, Inc from 2007 to 2011, I developed an Aimpoint M68 Close Combat Optic (CCO) Course that was taught at the First Army Regional Training Centers East, Central and West, as well as numerous active duty and National Guard units preparing to deploy to Iraq or Afghanistan. A recurring comment from the students, most being senior NCOs was, “I have been using and teaching soldiers to use the M68 CCO for almost 10 years and the information and methods that I taught were wrong.” They didn’t know what they didn’t know about the M68 CCO (CompM2, CompM4, CompM4S sights) or Aimpoint sights in general.

While I can’t share with you in this article what is normally two and half days of classroom lecture and live-fire training, I can try to provide some information about Aimpoint sights that you’ll find useful. If you truly desire to learn more about how to properly use combat optics, purchase the Intro to Combat Optics by Panteao Productions (www.panteao.com/product/intro-to-combat-optics-freddie-blish).

While the original U.S. Military M68 CCO was the Aimpoint CompM XD with 100,000 optics issued in 1997, the Aimpoint CompM2 is the optic that is best known as the M68 CCO. The CompM2 began fielding to the U.S. Army in 2000, with over 280,000 units purchased. With the eye-safe Circuit Efficiency Technology Light Emitting Diode, Aimpoint advanced battery life from 1,000 hours (41 days) with the CompM XD to 10,000 hours (13 months) on setting 7 of 10 with the CompM2. The CompM2, however, was not without its flaws. Setting 7 was not bright enough for use in bright day light, thus the user had to turn the setting up to 9 or 10 in order to see the red dot, which led to diminished battery time. Additionally, the setting adjustment knob was not as rugged as it needed to be for use by soldiers and marines. The roll pin could shear during hard use and the knob would come off. The only other drawback was U.S. Army Picatinny Arsenal designed QRP long ratchet knob. The QRP mount was prone to coming loose under field conditions and falling off the carbines and rifles. This resulted in soldiers using bailing wire or 550 cord to secure the optic and mount to their carbines and rifles. 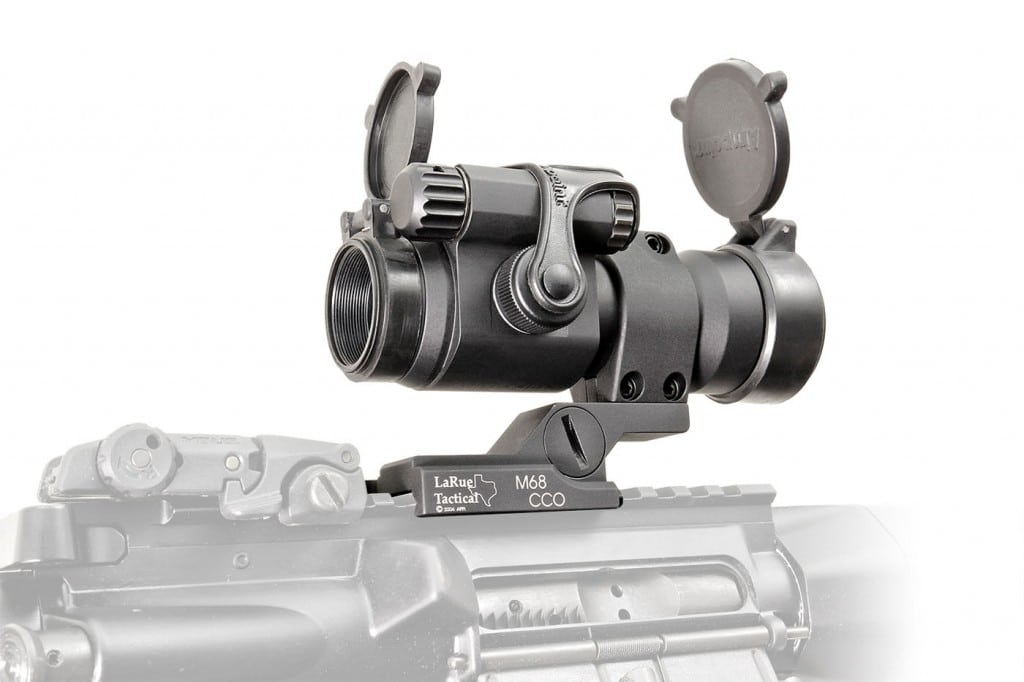 In 2007 Aimpoint, Inc. was awarded a new contract with the U.S. military for 163,000 CompM4 sights, with subsequent additional orders for a total of over 339,000. The CompM4 was a significant improvement as the new M68 Close Combat Optic. Per the U.S. Army requirement, the CompM4 replaced the 1/3N Lithium battery used by the CompM2 with an AA Alkaline battery. Also, with the new Advance Circuit Efficiency Technology LEDs, the battery life increased from 10,000 hours (CompM2) to 80,000 hours (9 years) on setting 12 of 16. Basically a soldier could be issued a CompM4 and change the battery at the end of his second enlistment, all while the sight remained on. Additionally, when used on setting 12 the 2 MOA red dot was easily viewable and usable unless in extremely bright sunlight. Even though people thought the CompM4 was larger than the CompM2 it was actually 0.4” shorter. This optical illusion occurred due to the battery compartment for the CompM4 being longer than the one on the CompM2.

Another improvement in the CompM4 was the ability to bolt the mount to the body of the optic vice using 30mm rings. This did increase the weight by 0.3 ounces (11.8 vice 11.5 ounces), but the increased ruggedness of the QRPII mount was well worth the trade. The ratchet knob on the QRPII mount was significantly better than that of the original QRP mount, and the CompM4 no longer needed to be tied to the soldier’s carbine. And submersion depth was increased to 150 feet.

In 2009, Aimpoint, Inc. was awarded an Indefinite Delivery, Indefinite Quantity (IDIQ) contract for 565,000 CompM4S sights. The contract was contested by a competitor, whose optic failed the 6,000 round durability test. Their optic was given another opportunity at the 6,000 round durability test, but did not pass. The Federal Judge who presided over the case authorized the Department of the Army to purchase 265,000 CompM4S sights per the IDIQ contract. The CompM4S sight has the same features as the CompM4 except that the battery compartment is located at the 5 o’clock position versus the 1 o’clock position. The Swedish word “soder” means “South”, hence the “S” in CompM4S. The location of the battery compartment in the 5 o’clock, or “soder”, position makes for a cleaner and lower profile sight, as well as protects the brightness knob even more. 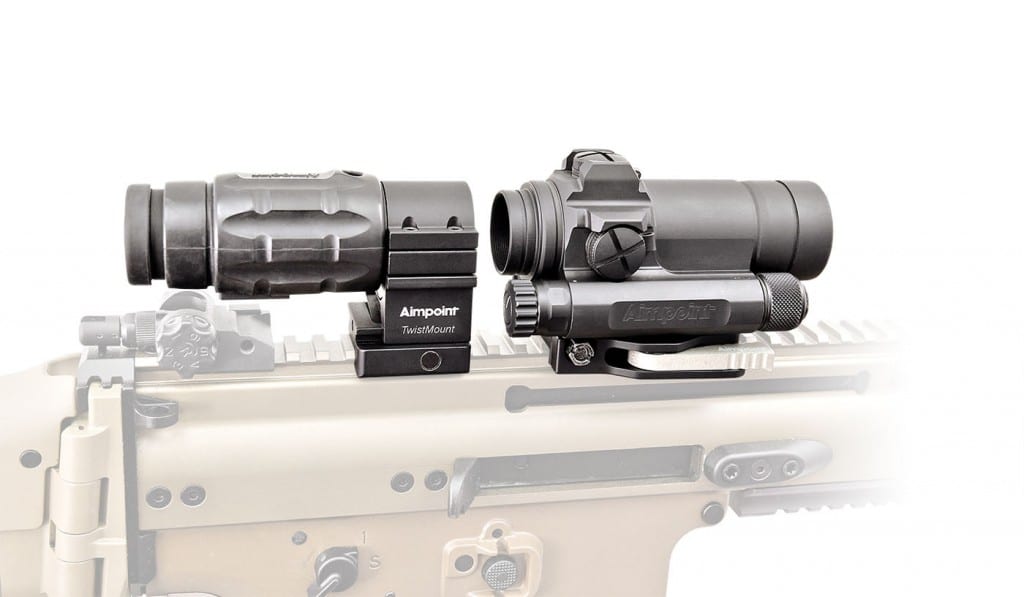 In 2007, Aimpoint introduced the Micro T-1 to the military and law enforcement communities. The Micro T-1 was a game changer. Possessing the same robustness as the CompM4, and using the same ACET LED, it is capable of a 50,000 hour (5.7 years) battery life on setting 8 with a 2032 Lithium battery. The real benefit of the Micro T-1 was weight savings. The Micro T-1 weighs approximately 6 ounces with a mount, either an Aimpoint 39mm Spacer (SKU12358) with Micro LRP mount (SKU12905), LaRue Tactical LT660, GDI MT6–OSM, or ADM Micro Mount. This makes the Aimpoint Micro six ounces, or nearly a half pound, lighter than a CompM2/M3/M4 or EOTech. The smaller and lighter size, as well as the great flexibility of the Micro T-1 led the special operations community to begin purchasing them in 2007.