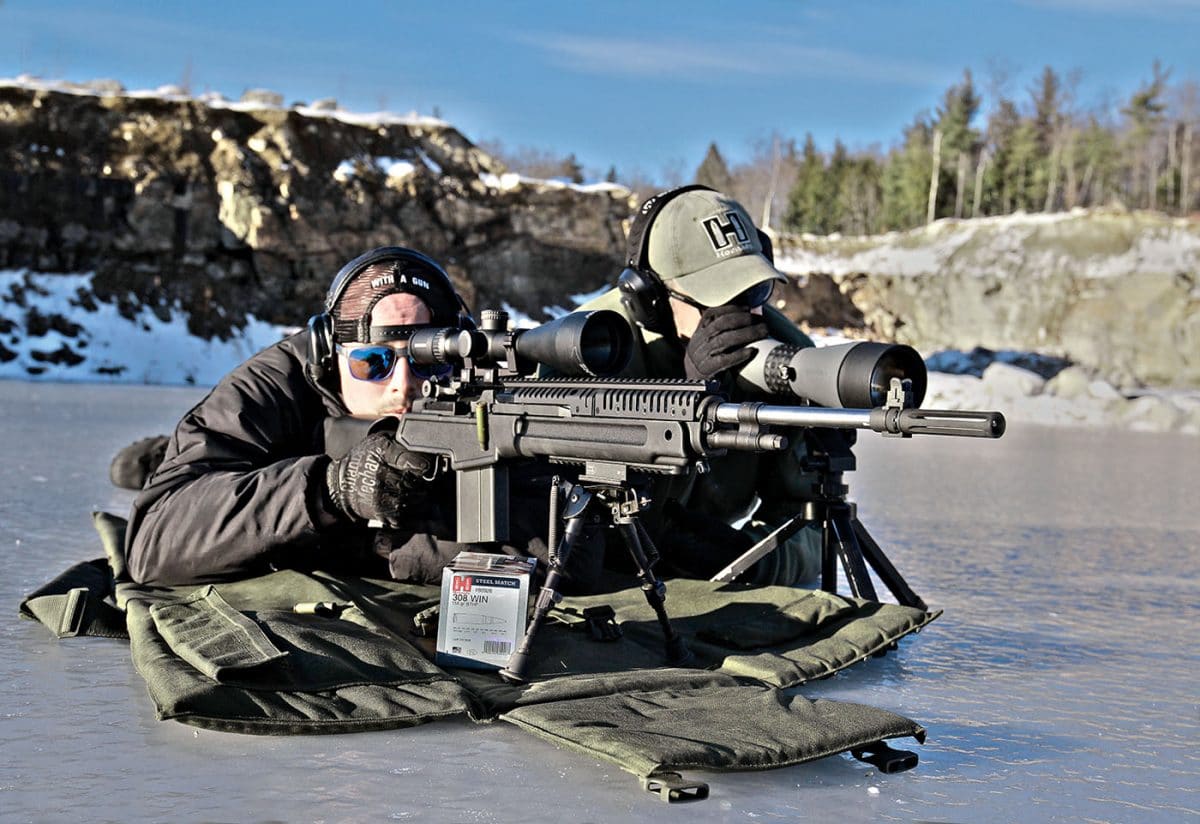 At 100 yards, Lapua 170-grain “lock base HPS” .308 Winchester delivered a very tight double, and put all three shots into 9/16ths of one inch, with the farthest-apart bullet holes measured center to center. For most of my lifetime the “minute of angle group,” all shots in roughly one inch at this distance, has been the gold standard for rifle accuracy. With this Lapua ammo, the M1A Loaded shot twice as tight.

From 300 yards, a load developed for the military—the MK 118 175-grain boat tail hollow point—put three shots into 2-5/16ths inches. Well within a minute of angle, and delivered with a powerful semiautomatic rifle.

At virtually every distance, our test team was putting bullets into the tie-breaking center “ten-X” ring. Accuracy that, delivered on demand, would win national championships.

No malfunctions of any kind were noted by any of the testers. 100% reliability.

Why A Semiautomatic Precision Rifle?

For more than a hundred years, conventional wisdom has held that if you wanted the ultimate in precision, you’d need a single-shot or bolt-action rifle, and a semiautomatic was for when you needed to shoot multiple shots fast, with coarser accuracy being the universally accepted penalty

That has changed, largely due to the prevalence and advancement of the AR15 platform. Modern advancements have impacted the M14/M1A platform, too. When our military abandoned the M14 as the general issue rifle they kept it for faster-shooting sniper work, and when the designated rifleman concept came in during recent conflicts, the military scrambled to take old M14s out of mothballs for that assignment.

Years ago, when I was teaching for the Sacramento Deputy Sheriff’s Association at their agency’s range, we hosted as a guest lecturer the man who had been behind the precision rifle when the Two Guys electronics store hostage situation went down in 1991. A gang of four homicidal thugs were holding forty hostages. When it became clear that deadly force would be the only option for the largest hostage rescue operation in American police history, the plan was for a SWAT sniper—our guest lecturer—to take out the leader with the first shot, at which time the staged rescue team would make entry.

He was behind a standard bolt-action precision rifle, with the target spot on in his crosshairs. However, just at the moment he pressed the trigger, the lead hostage taker pulled a heavy glass door closed between himself and the bullet. The angled, thick glass was just enough to deflect the .308 slug.

Still up and running, the killer raced away from the door, shooting hostages, before the rifleman could bolt another round into the chamber. The entry team exploded in, but by that time four hostages were dead and several more wounded. The HK MP5SD submachine guns of the entry team quickly put down the hostage takers—three killed, the fourth wounded and captured—but the man behind the precision rifle still grieved for those who were killed by the man who had escaped the one shot the rifleman had no time to follow up with his bolt gun. I have always wondered what the outcome would have been if he could have simply fired one or two more follow-up shots instantly, with a semiautomatic rifle as accurate as, say, a Springfield M1A Loaded.

My thanks to Fred Mastison, whose excellent article in GWLE convinced me I needed to shoot this rifle. It’s too heavy to be an “all-purpose” rifle, but when fast, powerful shots are needed at ranges that may be long, the Springfield M1A Loaded is absolutely worth every penny of its manufacturer’s suggested retail price of $2,021, given that it includes the already-expertly-fitted Archangel stock that runs close to $250 as a separate item that isn’t necessarily easy for the aftermarket buyer to install. The MA5028 Steel Mount runs $299; the Vortex Viper 6 Scope, $739; and the Vortex Rings, $50 a pair. Total retail on a rifle set up like this one: $3109.00.