Ruger’s latest polymer pistol is designed to compete directly with the Glock, M&P, et. al., and shows that Ruger has learned from its competitors. 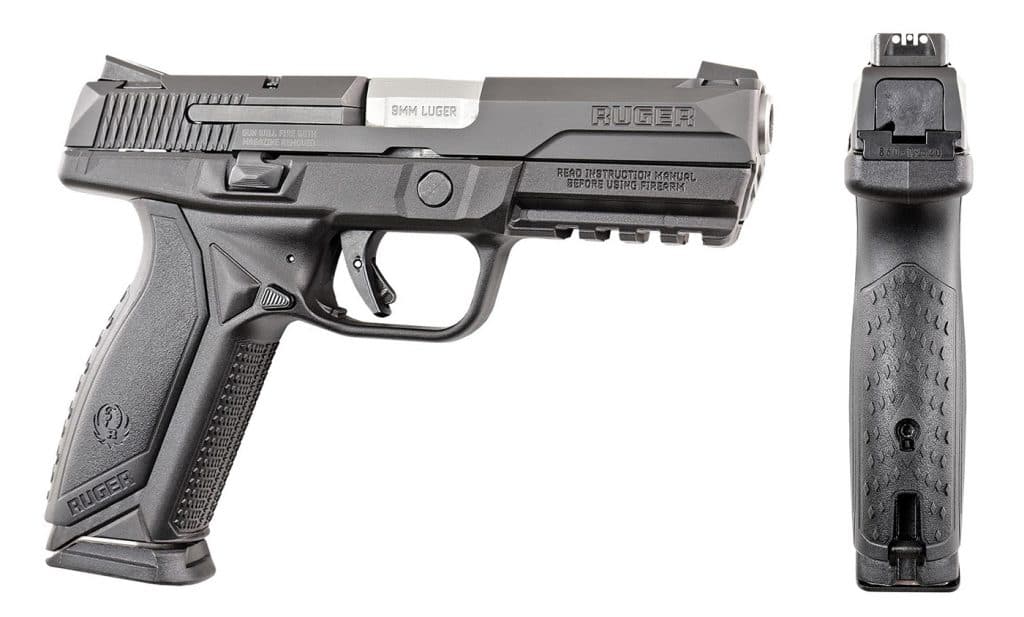 It was well over thirty years ago that I sat in Bill Ruger Sr.’s office in Newport, New Hampshire while Bill swore me to secrecy and showed me the prototype of what he hoped would be his company’s entry for the next American service pistol—a double-action, double-stack designated the P85. When the gun came out, it had some flaws, which Bill and his engineers quickly corrected in the P89 model, and the concept then advanced to the polymer-framed P95, which I for one thought continued the Ruger tradition of reliable, well-performing guns at “best buy” prices. They were “overbuilt” for heavy duty use, a Ruger tradition: it is probably not a coincidence that two of the greatest firearms designers of the 20th Century, William B. Ruger, Sr. and Mikhail Kalashnikov, designer of the AK47, became good friends after the Cold War was over.

Time went on. Striker-fired pistols with uniform trigger pulls from first shot to last came to dominate the market. Ruger responded with their SR series. After I wrote up the SR9 and said something like “The trigger, well, sucks,” I never got invited to another Ruger gun writers’ seminar. Ruger listened to that criticism from me (and many others) though, and to their everlasting credit, they improved the trigger pull of the SR9, SR45, etc. The SR series became another “best buy,” but for some reason, never came close to Glock in the polymer pistol market.

Now comes the Ruger American, the company’s most direct challenge to that market yet. One night over dinner at Bill Ruger’s house, I told him I considered him (as everyone else did) the greatest American gun designer of his time. He chuckled and responded, no, he considered himself an engineer who improved on the designs of those who had gone before him. True or not, that concept is found in the Ruger American, designed long after Bill’s passing, which indeed incorporates some of the most popular concepts in contemporary pistol design.

The removable internal chassis of the SIG P320? Check. Interchangeable backstraps for the grip-frame to adapt the gun to the hand size of the user, which tracks back to Walther twenty-some years ago? Check. The realization that if the trigger pull felt kinda like a Glock, most buyers wouldn’t care if the mechanical designation was “partially cocked” or “fully cocked,” which goes back to Springfield Armory’s XD-series revitalization of the Croatian HS HS2000 pistol of 1991? Check. The ambidextrous magazine release buttons of those Springfield XD pistols? Check, again. The ambidextrous slide release levers of the hugely popular Smith & Wesson Military & Police auto pistol series? Yup…that’s there too.

The three most popular bullet weights for the 9mm Luger cartridge are 115-, 124- and 147-grain (the latter being subsonic). One load of each, from three different makers, was tested from a Caldwell Matrix rest on a concrete bench at 25 yards. Each group was measured for all five hits and again for the best three, the latter to factor out unnoticed human error, which gives a close approximation to what all five would do from a machine rest with the same gun and load. We didn’t have access to a machine rest with inserts for this new pistol, nor do most of our readers, so the protocol I used gives something with which the reader can compare his own pistol with the magazine’s test.

For the 115-grain load, I used Federal 9BPLE, which over the years I’ve found to be the most accurate of the hot (+P+) 9mm loads, and not coincidentally a load that many major police agencies found to be a dynamic “man-stopper” in many decades of service. Running at about 1,300 feet per second, these bullets punched five holes 2.30” apart, the best three in a mere 1.06”.

For a 124-grain load I used Black Hills standard pressure with the Hornady XTP (“Extreme Terminal Performance”) jacketed hollow points. The quintet of holes measured 2.35”, with the best three in exactly an inch and a half.