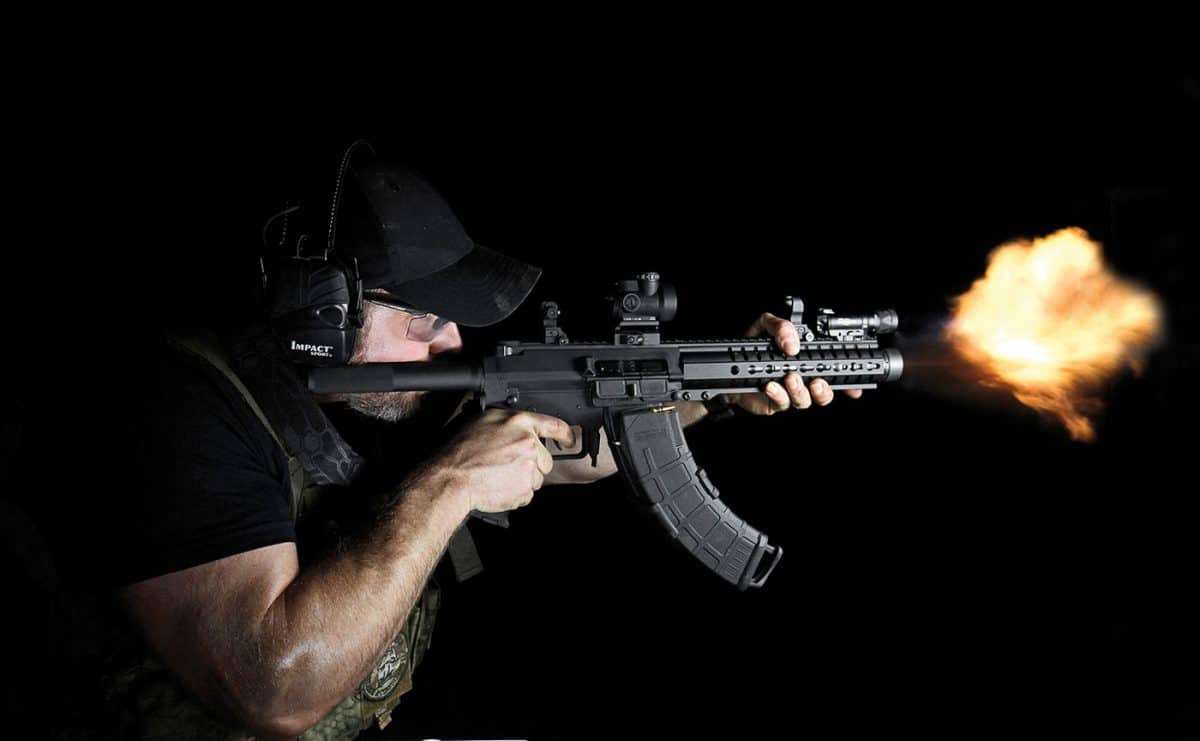 Trying to marry the AK-47 and AR-15 platforms has been a challenge for many rifle builders. The two most popular carbine platforms, they each have their respective strengths and weaknesses. While shooters dedicated to either platform see any attempt to mate the two as profane, many others have been hoping for years that some innovative firearms manufacturer would pull it off. A number of attempts have been made with varying degrees of success by modifying the AR-15 to fire the AK’s 7.62x39mm round, but the first and only company to create a “ground up” design is CMMG, Inc. with their Mk47. Now, with their new Mk47 AKS8, a pistol version is also available.

Priced at $1,549.95, the Mk47 AKS8 is basically CMMG’s Mk47 AKS13 rifle fitted with a pistol-length (8-inch) barrel and no buttstock mounted on the buffer tube. Like the rifle version, the Mk47 AKS8 is built on a modified version of CMMG’s Mk3 (.308) receiver and employs a modified version of the robust Mk3 .308 bolt carrier group to harness the power of the 7.62x39mm cartridge.

The 8-inch, medium profile barrel is rifled at a twist rate of 1:10”, and the muzzle is threaded at 5/8” x 24 TPI for installation of a suppressor. It comes from the factory fitted with a 1.5-inch diameter by 3.25” long Krink flash suppressor. The forward one inch of the Krink muzzle device protrudes from the handguard, while the balance of it is hidden underneath. CMMG designed the Krink specifically to reduce muzzle flash rather than to reduce muzzle rise and/or perceived recoil, although it actually does a admirable job at reducing all three.

The 9.25-inch long, CMMG RKM9 handguard is machined from aerospace-grade aluminum alloy, and is finished in matte black, Type III hard anodizing to match the finish on the receivers. The handguard features a full-length, 23-slot Picatinny top rail, plus flats a the 3, 6 and 9 o’clock positions, each containing eight KeyMod slots for mounting accessories like a forward grip, laser, white-light illuminator, etc.

The upper and lower receivers are more blocky looking than an AR, and the push-type, AK-style magazine release mounted on the front of the integrally machined, square trigger guard further contribute to different appearance. Rest assured, however, that the Mk47 AKS8 has all the same guts as an AR. As noted, the upper receiver and bolt-carrier group are visibly beefed up, and the mag release is repositioned, but otherwise operation and functioning are identical to any direct-gas-impingement AR. The Mk47 AKS8 uses a standard AR-style charging handle and Mil-Spec trigger group, and includes a standard AR safety lever, shell deflector and ejection-port cover. With the exception of removing the magazine, the process of disassembly and reassembly are identical to that of any AR.

Like an AK, there is no mag well protruding from the lower receiver, as this gun uses standard AK magazines. That fact alone sets the Mk47 AKS8 apart from the competition, in that it was designed from the ground up to provide super-reliable functioning using AK mags. One Magpul PMAG 30 AK MOE comes with the pistol, as does CMMG’s lifetime guarantee.