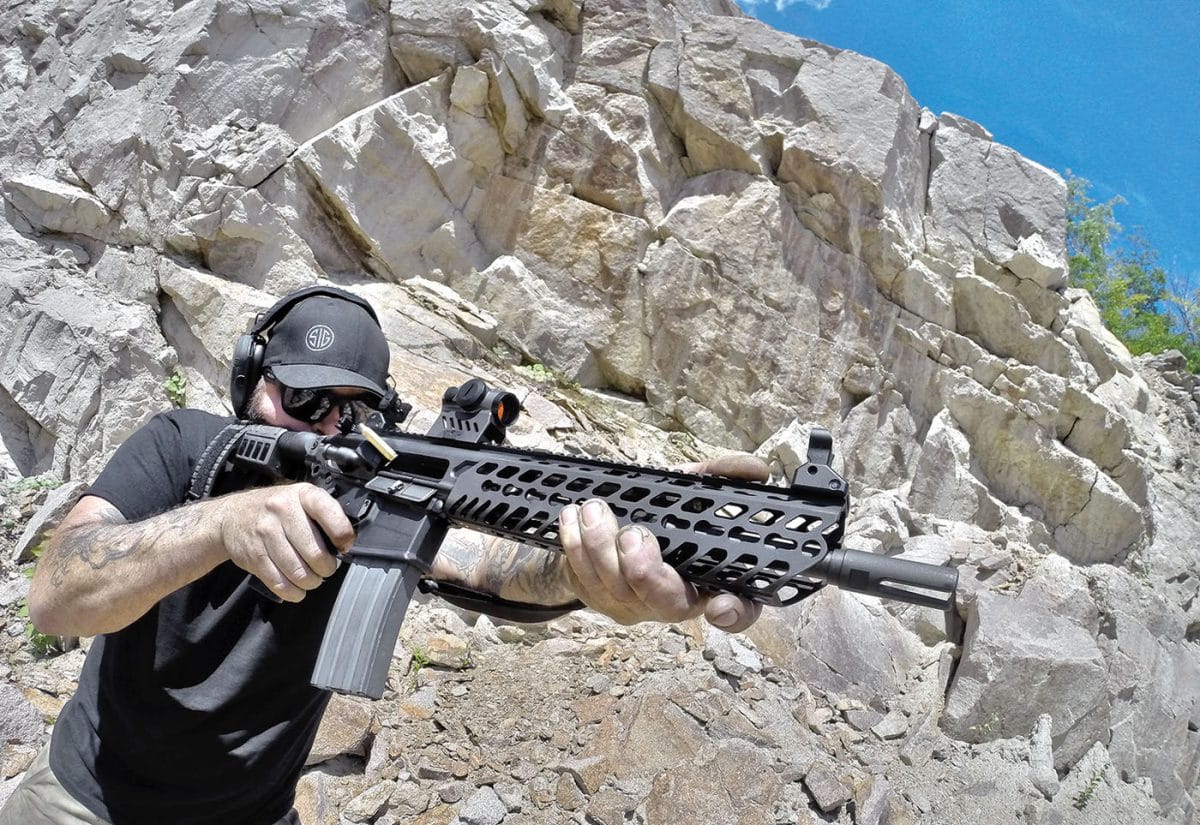 In the few short years that Sig Sauer has been building AR-15s they have advanced the competence of the platform substantially. The company’s first ARs—the Model 516s—were all gas-piston designs, which are expensive both to manufacture and to purchase. After several years, Sig introduced their M400 Series direct-gas-impingement models, which chopped about $500 off the cost of owning a Sig Sauer AR. It must have been a real good idea, because Sig now catalogs seventeen models in their M400 Series.

The subject of this article is the new MCX Pistol with 11.5-inch barrel and SBX stabilizing arm brace chambered in 5.56 NATO ($1,972). This isn’t just another AR pistol, but rather it’s the pistol version of a revolutionary new design of the venerable AR-15 platform. The MCX family consists of a 16-inch barreled carbine, both 9- and 11.5-inch barreled SBRs and 9- and 11-.5-inch barreled pistols, with or without the SBX stabilizing arm brace, chamber, variously, in 300 Blackout, 7.62x39mm and 5.56 NATO. Except for barrel length, chambering and stock configuration, they are all virtually identical.

Perhaps the most outstanding feature of the MCX is its gas piston operating system. Dual captured recoil springs mounted on the operating rod extension above the bolt carrier handle cycling, eliminating the need for a buffer tube altogether. This system as all the advantages of other gas-piston operating systems, but the elimination of the buffer tube permits installation of a range of side folding stock options not available on standard ARs. The side-folding hinge attaches to the rear of the lower receiver, and when folded open holds the stock (or SBX stabilizing arm brace) tight against the left side of the receiver.

Another revolutionary feature of the MCX Series is the monolithic (one piece) upper receiver and full length Picatinny top rail, literally machined as a single, continuous component. The lower handguard is highly ventilated and has KeyMod flats at the 3, 6, and 9 o’clock positions, each containing eleven KeyMod slots (ten in the 9 o’clock flat) and fills in the front portion of the Picatinny top rail.

Turning specifically now to the MCX Pistol with SBX ARM Brace, our evaluation gun was the new 11.5-inch barreled model chambered in 5.56 NATO with the SBX stabilizing arm brace. The upper receiver with integral Picatinny top rail has 34 slots, and the lower handguard has an 8-slot section, for a total of 42 slots top rail slots. The 11.5-inch barrel is tipped with threaded, 3-prong flash suppressor and is rifled at a twist rate of 1:7”. 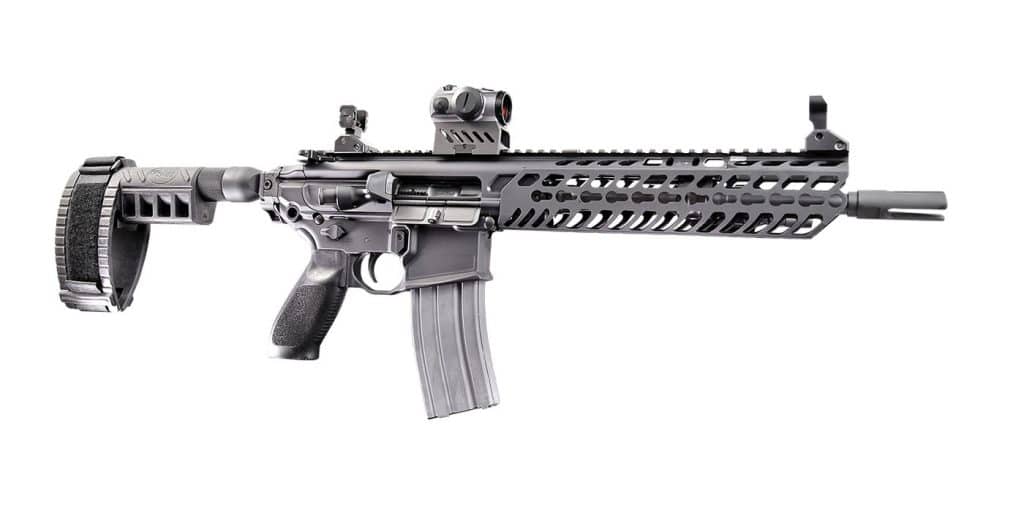 The SBX stabilizing arm brace is attached to the folding hinge and is BATFE approved only as an arm brace, not as a shoulder stock. Made from hard rubber, it provides good traction, and a 1.5-inch wide x 4-inch long flat to bear against the top of your forearm. When used as an arm brace, the 3-inch wide rear portion secures around your forearm with 1.5-inch wide Velcro. It actually does a good job of stabilizing this 5.75 lb. (empty weight) pistol for one or-two handed shooting.

Although using the SBX brace as a shoulder stock is a big no-no in the eyes of the ATF, shooting the MCX with the brace pressed against your cheek, or with the brace folded and punching the gun forward against the tension of a single-point sling both proved more effective means of of accurate fire.