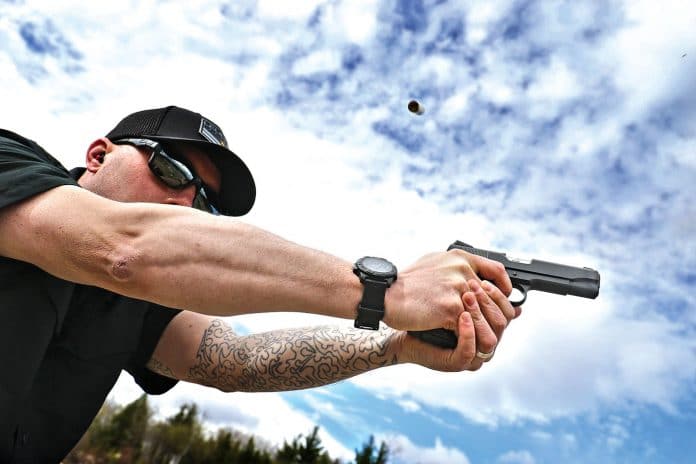 A classic design, well-executed, with a strong pedigree . . . and surprising accuracy. 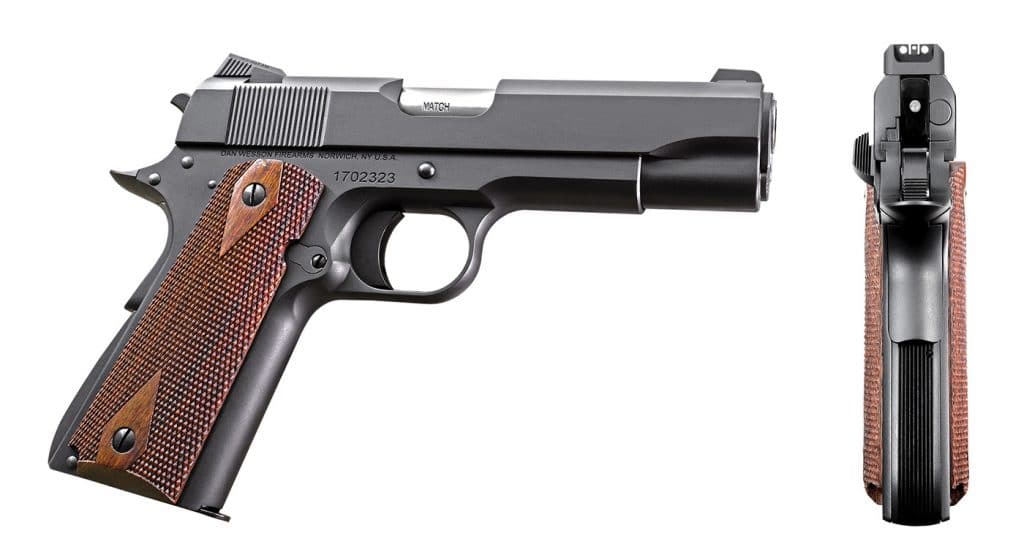 Meet the Dan Wesson A2 Commander 1911 .45 auto pistol. It comes to you with one heck of a pedigree, from multiple directions.

There’s John Moses Browning, to start. His classic 1911 pistol is more popular than ever well over a century after it hit the streets (and the battlefields).

There’s the Commander format, finalized by Colt in 1949 and hitting the market a year later. Three-quarters of an inch shorter at the front than the Government 1911 Colt had manufactured for nearly forty years, it was also the first semiautomatic pistol to be produced with a light aluminum frame.

As the years went by, Colt perceived demand for a 1911 this size but all-steel in construction, and the Combat Commander was born. More time passed, and in the strangeness of American marketing and branding it went from the lighter gun being called the Commander and the heavier the Combat Commander, to the lighter one being dubbed the Lightweight Commander and the heavier becoming known as simply, the Commander. The latter, all steel, is the format of the Dan Wesson A2 Commander.

There’s Dan Wesson, a brand founded by the man whose name remains on the company, a scion and namesake of Daniel Baird Wesson, one of the founders of Smith & Wesson. I knew Dan and counted him as a friend. He came up with a brilliant design for double-action revolvers with interchangeable barrels, and produced revolvers that equaled the iconic Colt Python for superb accuracy.

And then there’s CZ, Cesca Zbrojovka of Czechoslovakia. Pronounced “see-zee” by most in the USA and “see-zed” by much of the rest of the world, CZ has a long and solid reputation for manufacturing reliable, ergonomic small arms. They have for some time owned Dan Wesson.

Put it all together, and you have one helluva pistol.

With a 4.25” barrel, full-length grip taking standard size single-stack 1911 magazines, and chambered for the .45 ACP cartridge around which the 1911 was built in the first place, you have an all-steel Combat Commander by (sort of) another name.

On Target’s test sample came out of the box with a pleasing and smooth, if not fancy, dull blue-finish and nice looking checkered walnut stocks in the diamonds-around-the-grip-screws pattern of the original 1911 Colt. Also original to the Colt Commander, though not the first 1911s, is the arched mainspring housing first seen on the 1911A1 service pistol of the 1920s. The first 1911 had a long trigger, which a majority of today’s manufacturers have returned to by popular demand . . . the first Commander circa 1950 had the short trigger of the 1911A1 . . . and on the A2 Commander, Dan Wesson seems to have split the difference. In the same sense that one of us might say “it’s partly cloudy” and the other might say “it’s partly sunny,” we can debate whether the trigger on the A2 Commander is “medium” or “medium-short” in length, but I’ll say this: it fits my “average size adult male hand” very, very well, and will be suitable for most folks with shorter fingers than that, too.

Sights are fixed, big enough to see well, with the popular “three white dots” embedded. The magazine well is chamfered to speed up reloading. A larger-than-GI thumb safety is for right-hand manipulation only. The grip safety is the currently (and deservedly!) popular beavertail, with a slight flare at the bottom, not a true “speed bump” or “memory bump.” In my hand, it did not always release with a “high thumb hold” that put the thumb atop the safety. This will vary shooter to shooter, depending on hand geometry; try one in the gun shop, and if it works for you dry it will probably work for you live fire.