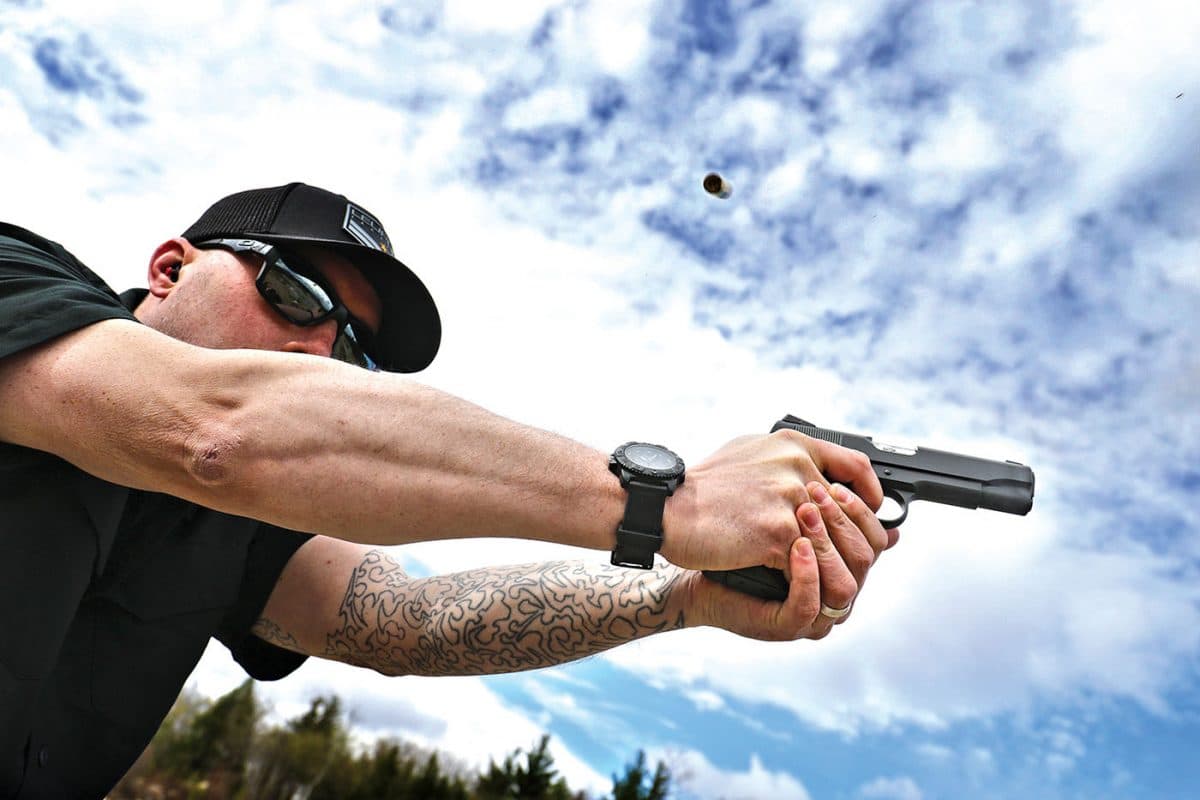 I’ve often said that trigger control is “the heart of the beast” for good shooting, and that was certainly true in this test. Measured at the center of the trigger with a Lyman digital trigger pull gauge, the A2 averaged 83.7 ounces, which translates to 5.23 pounds of pull weight. This is a good, safe trigger pull for a 1911 used for serious business under stress, by any standard. Subjectively speaking, there was the light take-up you want in a defensive handgun, and a slow, smooth, short “roll” after reaching the “wall” of firm resistance, followed by a sweet break with no significant backlash.

The thumb safety was stiff to work at first, but broke in during the course of testing, which encompassed both dry fire and live fire. Subjectively, the pistol simply “felt good in the hand,” even though most of the testers were more accustomed to 1911s with flat-back mainspring housings instead of this arched one, and triggers with longer reach than the Dan Wesson A2 Commander’s.

Recoil was what you would expect from a pistol of this size and shape: manageable if you know how to shoot a .45. This writer has spent most of his life shooting full-size 1911s, and some of it carrying lightweight Commanders and even shorter models, but going back to the 1970s found that an all-steel Commander with a 4.25” barrel like the A2 seems to hit a “sweet spot” for balance and “feel.” And, yes, that is a very subjective analysis, so weigh it as you will.

From a Caldwell Matrix rest on a concrete bench at 25 yards, I shot the A2 Dan Wesson Commander with 200- and 230-grain loads, measuring each 5-shot group once overall (good test for “human engineering” where there is no stress and the gun is artificially steadied) and again for the best three hits, which objective testing has shown me will closely duplicate what the same gun and load will do from a Ransom Rest, which most of our readers don’t have. The results, presented here in alphabetical order, were most pleasing.

Federal HST 230-grain jacketed hollow point has proven itself superbly “on the street,” and from the Dan Wesson this standard-pressure load put all five shots into 1.95”, the best three in 1.35”.

Hornady 200-grain XTP hollow points put the quintet of holes in 1.50”, and its best three in 0.60”, the tightest group of the test. These JHPs are designed for deep penetration while still offering substantial expansion.

Winchester 230-grain full metal jacket practice ammo in its “white box” USA brand exemplifies “GI hardball,” and because it is so widely distributed through stores like WalMart is probably the most popular load today in caliber .45 ACP. It turned out to give us the best 5-shot group of the test, 1.35”, with its best three hits in 0.85″. 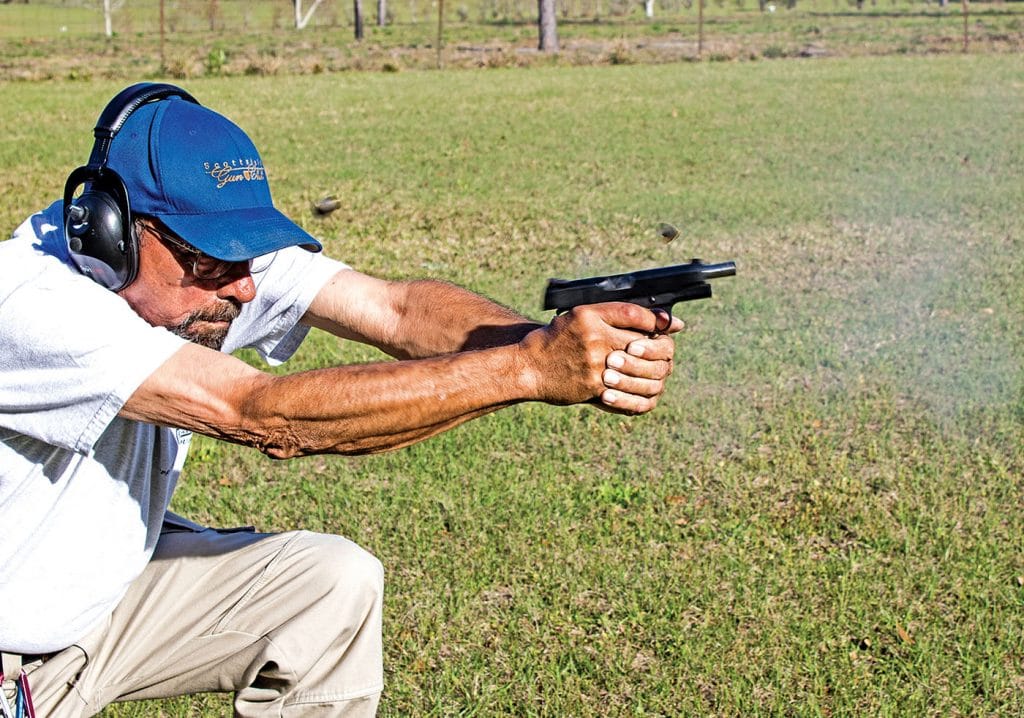 This is unusually good accuracy for a 1911 .45 pistol in this size and format, in terms of grouping ability. But there is another element of accuracy that has to be assessed with each individual pistol: point of aim vs. point of impact. Most people don’t know how often production firearms don’t hit anywhere near where they are aimed when they come out of the box to their new owner. With center hold at 25 yards, this Dan Wesson pistol put every shot in the maximum-point ten-ring of the Shoot-n-C bulls-eye targets we were using. The fifteen bench rest shots described above would have scored a 100%, 150 out of 150, with their three 5-shot groups, had it been a contest instead of just a test. This tells your reviewer that someone took the time at the factory to sight in the gun . . . and, in terms of quality control and trusting a product as it comes out of the box, that means a lot! I give my “compliments to the chef” to Dan Wesson and CZ.

Contrary to what you see on some internet gun forums, today’s modern 1911s can indeed be reliable. This is certainly true of Dan Wesson 1911s. I’ve had several go through the classes I teach, and their owners tend to shoot their 500 rounds without malfunction and graduate, usually in the upper tiers of the scores. The On Target test sample Dan Wesson A2 Commander .45 certainly lived up to that. We put a good number of rounds through it, from GI hardball to wide-mouth hollow points, and using the single magazine from Dan Wesson that came with the test gun as well as Wilson Combat magazines. We never experienced a single malfunction of any kind.

There are always things I don’t like about test guns. On this one, I wish the bottom edge of the grip safety was more “pronounced” than it was, for those who use high-thumb grasp or still follow the old paradigm of a light grip. I wish it had come out of the box with an ambidextrous safety: a defensive handgun should be workable with either hand, quickly and ergonomically.

That said, though, I was very impressed with the accuracy of the A2 Commander. At $1,363 MSRP, it’s a solid value. Hell, if I hadn’t already accumulated more 1911s than I should ever need, I would have bought the test sample. See the new A2 1911 line at your nearest dealer, or for more information, contact Dan Wesson, Dept. OT; Tel.: (607) 336-1174; Web: www.danwessonfirearms.com